Considering moving to Solus from Ubuntu Any Thoughts?

Hi, I have been using linux on and off for about 10 years, and for the last 8 months I have been running it as my main OS. I have been running Ubuntu as it is normally a stable distro with good support. Lately because of steam proton I have been living on the most recent versions of mesa and kernels for the newest GPU and graphics improvements and I am slowly realizing that I might as well move to a rollin release if I am gonna update a lot of the core system separately anyways.

I have been looking at Solus for a while, since what I have heard of it is that it is a “stable” rolling release with focus on not breaking the system from updating to quickly but still being a rolling release.

My question is if anyone here has any experience with Solus, and if you would recomend it. I am aware the repositories are not as complete as ubuntu or debian, but I think it probably covers my needs.

Anyways, I would apreaciate your thoughts and thanks in advance.

It’s a decent distro. If package availability isn’t a concern for you, and you don’t mind the support of a smaller (but very passionate) community, go for it.

Solus is cool, they have had a bit of a rough time of late when their lead dev stopped working on the project. The community had to rally round to take up the slack.

I have seen this a number of times where a distro is the vision of a single person. It becomes their passion project. Loads of user jump on board, then something happens to the project leader and things can become a bit tricky for a while. (PCLinuxOS, SolydXK, CloudOS).

You have to decide if Solus new dev team is up to the task or just treading water.

I tend to stick to distros with larger, more stable dev teams. At the very least not the single vision of one person.

I’m currently testing MX Linux and I think it’s a good fit for me. Manjaro is also a nice Distro for those looking for a Ubuntu alternative but I think I will stick with MX Linux for a while.

As has already been said, Solus is a great Distribution. They have their own Repository. This can be a upside or downside. If you are running latest kernels and drivers and need certain things (DXVK, things to make certain games playable) you aren’t guaranteed to find it in their Repos.

I’d vote for Manjaro in your case. It’s rolling, and stable. Plus you get every Linuxy Software under the sun either through the Repository or AUR. I’m running that at work and home and it’s the easiest in terms of gaming i’ve found yet. Their Kernel and Driver Management is incredible and in the end, it’s basically Arch, which makes most instructions you’ll find online applicable and copy-pastable.

Basically what everybody else is saying:

As of late, I don’t find that much joy in distro-hopping but if you feel like Solus gives you something that Ubuntu doesn’t, have at it.

I used Solus 2 years ago on my old MacBook and it was fun, stylish, lightweight but had Bugs and the community wasn’t that big and I found it hard to get my bugs to devs to fix them, maybe that has changed.

In the end, it doesn’t actually matter, its still gnu +linux, it looks different, it has its own quirks but its usable and does a good job running reliable.

Do it and keep us updated!

Excuse me sir, do you have a moment to talk about our Lord and Savior, fedora?

You’re more than welcome to try and geckopill him. He did say he wanted to go rolling.

Solus is fine.
It’s super fast and great if you don’t mind having software missing from repos. Now that snap and flatpak are up and running they fill in the gaps a bit.

but I think I will stick with MX Linux for a while.

Apart from the initial janky look ( side panel ) i have been really surprised with MX linux, i thought it was going to just be another Ubuntu xfce spin but i was wrong. The performance is really amazing even in a virtual machine. Obviously you can switch out desktop environments.

I know what you mean about the side bar. 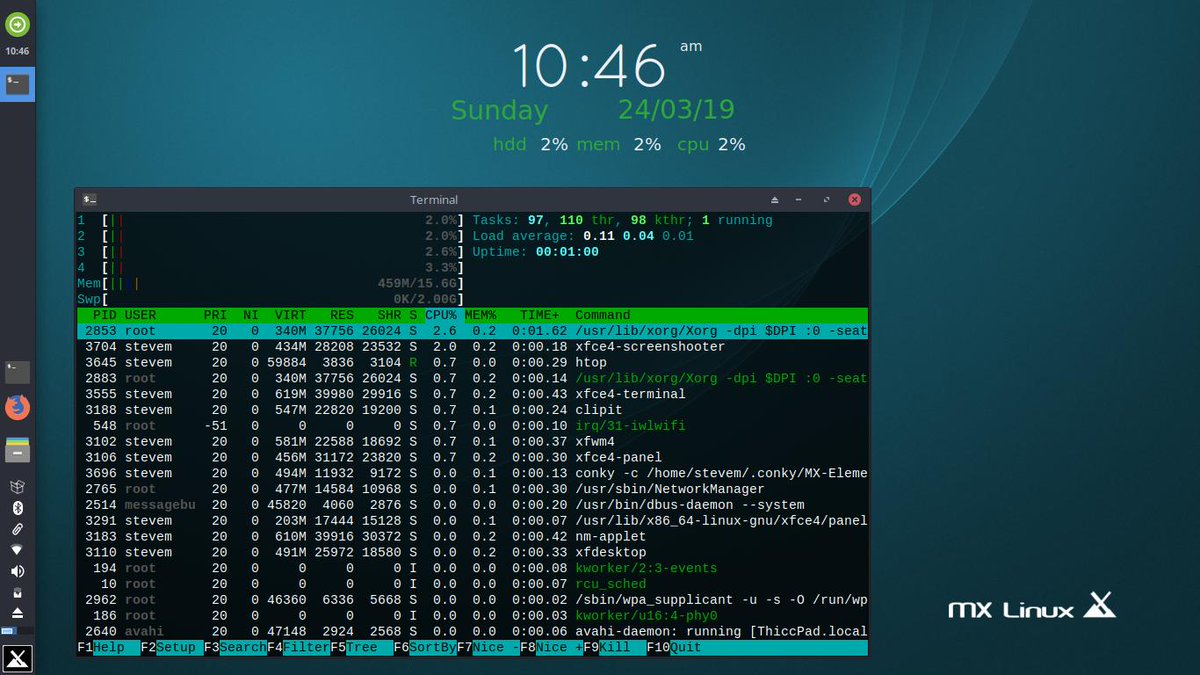 Not show in this screen grab is what it looks like when you make it narrower, so the application icons are the same size as the indicator icons. It looks much better.

I have this installed on my aged ThinkPad X220

Why don’t you put it on the top or the bottom ?

My desktop has been Solus since Dec 2017. I like it. If you have trouble finding something in their packages, don’t forget about snap and flatpak.

The only major issues I’ve had were caused by the rapid amdgpu driver changes in kernels around 4.15.

My old ThinkPad had the devil’s resolution and vertical real-estate is at a premium. Strangely, Canonicals Unity desktop was really good on smaller laptop screens. Gnome is truly terrible as it wastes so much vertical space. XFCE out of the box is better but still not perfect but not as bad. I might just give up on GUI desktops and move to a tiling window manager.

Interesting history that Ubuntu’s Unity interface was inspired in part by the specialized Ubuntu Netbook Edition (with netbook-launcher-efl) specifically designed for cramped screens.

The GNOME Shell Extension Unite adds back the vertical space savings of Unity. Along with some other tweaks (e.g window titlebar button placement, and window focus on hover, with gnome-tweaks, if that’s your thing), and additional extensions like Frippery Move Clock, KStatusNotifierItem/AppIndicator Support, and Impatience (to speed up gnome-shell animation speed), GNOME becomes quite useable and snappy. 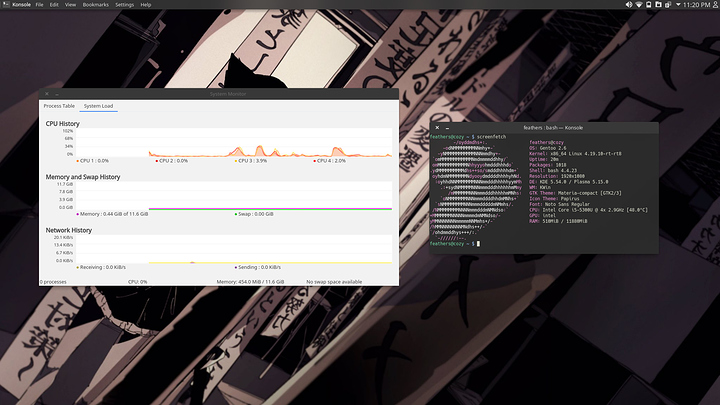 The top bar and panel merge, and everything is functional

KDE will always be close to my heart. One of the first distro’s I used had KDE, best part of 20 years ago now. My prefered DE for a full desktop PC. I was firmly in the KDE camp till Ubuntu introduced me to Gnome 2. I have just not gotten my head around Gnome Shell. Big candy icons and such.

I personally not really see much of a vallid reason to go from Ubuntu to Solus.
Yes Solus is definitely a nice OS, however it is still pretty limited in terms of available packages etc.
It is nice that they want to be independed, but in the end the sense of it is debatable.
If you are looking for something more rolling bleeding edge, then i think that there are better distributions with a wider support base out there.

I was a chronic distro hopper, but after trying Solus about 2 1/2 years ago, I haven’t had any urge to try anything different. I really like Budgie; it’s simple, yet elegant. Back then, the repo wasn’t so big, so I used to keep a copy of Ubuntu Budgie on a secondary laptop. I found Ubuntu Budgie to be much more sluggish than Solus and after Ubuntu took a wrecking ball to their repo, I switched this old laptop over to Manjaro Budgie. Manjaro is more responsive and obviously the repo is awesome, but my main machine stays on Solus because I simply prefer it. My needs are quite basic, so these days I find myself very seldom really needing anything from the AUR. It has gotten to the point that I keep Manjaro around more out of habit than any real need.

I tend to leave my machines on for extended periods and I find that Manjaro Budgie can become unstable and also loose some responsiveness after about two weeks of uptime. I’ve had Solus up for a month at a time and have never seen any performance degradation.

If you’ve got a 64-bit machine and you’re OK with the repo selection Solus rocks. It also has a pretty small RAM footprint … particularly with the Mate desktop and it runs well on older hardware. I installed Solus/Mate on an old Athlon 64 machine with 2GB of RAM, and surprisingly, it was actually tolerable. I’ve never tinkered with either Solus/GNOME, or Solus/KDE, but is sounds like the devs are making great strides with them.