Co-inventing with community, what do you do with x86 boards and Raspberry Pi?

I would like to open this thread looking for co-inventing with you!

Do you love tinkering with home lab or DIY internet-of-things? What sort of devices and ready-made kits would you like to see?

Any cool feature we can bring to you in 2023! Or surprise late 2022! Communities’ suggestion and experience is always Seeed’s main concern.

We hope to learn from you:

Our selected boards looking forward to your ideas

Wendell is working on a video about his CO2 sensors and home HVAC as part of the next Better IoT series.

Please let us know your idea and how can we improve, for all people sending ideas, we will send a $5 coupon as a little gift appreciates your attention! We will collect your ideas and consider about pre-building these ‘must-have’ apps into our device.

You can also reach out me via twitter @iamelainewu, and under the threads!

What sort of devices and ready-made kits would you like to see?

An x86 SBC that uses the remaining PCIe lanes to serve a SATA controller in order to have board ready to serve as a NAS without having to work with finicky adapters on the M.2 slot. Or to something like Odroid did with their H3, offering a PCB mounted expansion card for the M.2 slot that allows to plug SATA cards, multiple ethernet jack adapters, maybe a break out to a PCIe slot opened at the back.
Oh and I’d like to see them split in kits like “basic” with just the board, “NAS” with the board plus SATA board with all the needed cables to make it work with all the ports served, “router” with the board plus the ethernet card for example. Including the PSU for all of the configs. I would hate having to pick things individually to complete a kit, like cables, case, PSU and such.
So, in very few words, a modular platform for low power home labs.

Refreshed CPUs and a wider offer of x86 “cheap” boards since RaspberryPis are getting scalped and are not viable anymore for home projects.

Any apps you want to pre-build into devices to set up as out-of-box device.

I don’t think they’re needed for the audience your devices are marketed for.

I am doing so many cool things with what I have 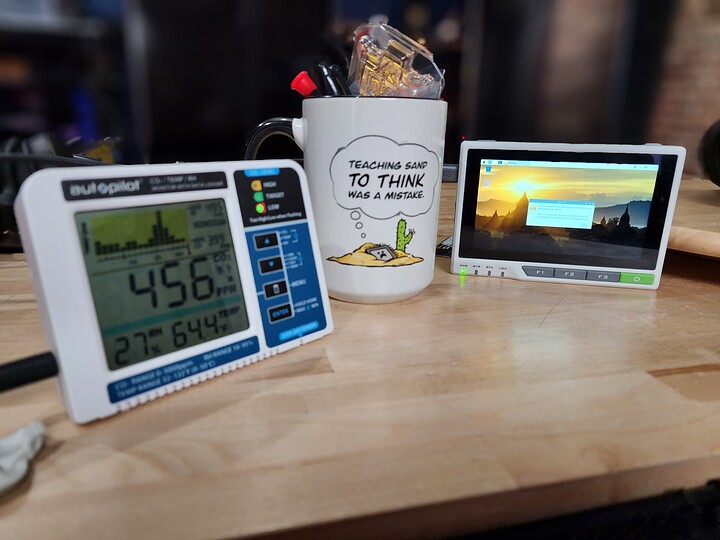 It would be nice to see a small, cheap, low-power NAS for 1 or 2 HDDs. Something like Odroid HC1, HC2, HC4 and on board Armbian / OpenMediaVault …

Me personally, I see three use cases for SBCs;

For 1 and 2, bonus points if there is a case that allows me to mount it to the wall. Maybe allow to VESA mount it to the back of a screen, too. You would be amazed how little data that actually needs backing up for the average grandma, and a x4 solution with 2.5" 1TB drives is a good start. Perhaps even make it possible to mount them flat? Hot swap is nice to have but not a necessity.

For 3, pretty much all games from before 2005 can be played by an Intel NUC on an emulator these days. An Arcade cabinet just makes sense now.

… and then being able to to stack then both mechanically and electrically between 1 and 12 of them (enclosures forming a backplane).

…and then being able to stack a CM4 or an amlogic or an Intel, or an nvme+sata PCI-E module or… something down the end. (So… you’d get 240T on a raspberry pi … for backups type of use cases. … or you’d do a ceph cluster of 3 systems with 4 drives each, … or you’d do a 25Gbps flash accelerated ZFS pool…

Yes, we saw many people asking for NAS, what about pre-install TrueNAS Scale?

for 2, our reComputer case have this VESA mount plate, works with Odyssey Blue.

I see a reTerminal there. Would love to know what kind of projects you are building with it

Yes, we saw many people asking for NAS, what about pre-install TrueNAS Scale?

for 2, our reComputer case have this VESA mount plate , works with Odyssey Blue .

A pre-installed NAS product that is pretty much fire and forget would be an awesome addition to my grandmas tech environment. Though, what I really would like to see, imagine an SBC that looks like this on the top side: 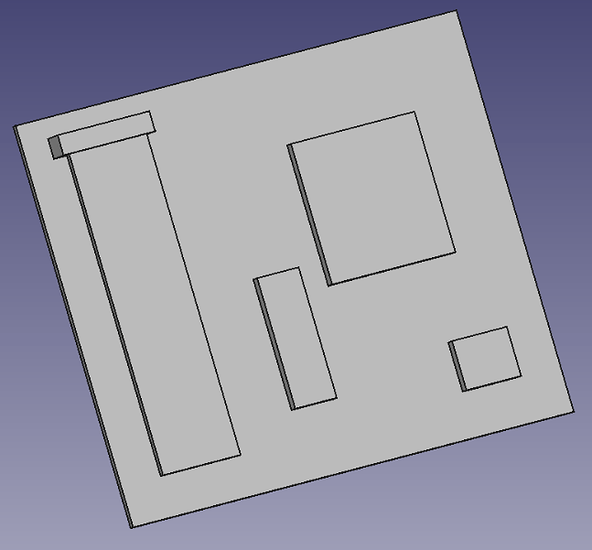 Pretty basic, you have your m.2 storage, a couple of ICs, a CPU, maybe some soldered RAM… but when you flip it over… 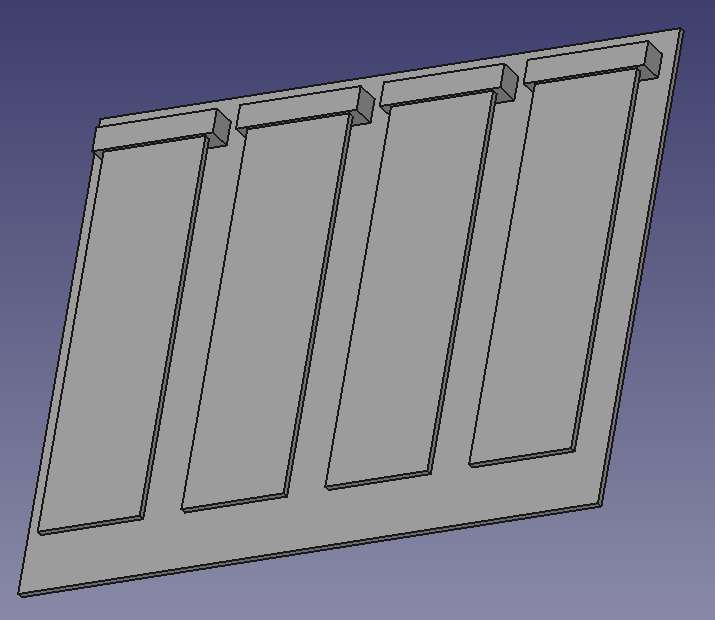 Boom, four NVMe slots waiting to be populated. Hang that up on the back of a screen or next to your router, yay, an out-of-the-way backup device that costs $300-$400 and sips power. 2TB NVMe drives are approaching $100 and 4/8 TB NVMes are not that far out either, though still not in consumer territory. I think by the end of the decade, we’ll see affordable 64 TB NVMe being a distinct reality. This is a rough concept sketch, but NVMe drives should be possible to dedicate from an Intel or AMD On-Chip CPU seeing as it’s all PCIe lanes.

As for SATA drives, a similar concept could be made here, too. 2.5" devices have a slight advantage in that they can be populated with more chips than NVMe, but the SATA interface is dreadfully slow by modern standards. I think two mechanical drives could fit in such a device without making it too big or bulky, if they sit more or less flush against the PCB. Even then we are talking about a 250x200x60 mm product at the minimum, which might be too big for the SBC space. With 4x 2.5" drives that space shrinks to 150x200x40mm which is much more acceptable in my book.

A lot of things to consider here, and I fully understand if you don’t see the market as ripe yet. Just wanted to give you an idea for a low-power, out-of-the-way NAS solution.

Most of the current commercial NAS solutions are HDD based and some of them use NVMe for caching. So it seems the market is still not ready for a completely NVMe-based NAS. But that could change if the NVMe prices keep dropping as you have mentioned. I am no expert on NVMe for NAS, but do you think it is necessary to use NVMe designed for NAS such as the WD Red, or else choose any NVMe for this purpose? Because these special NVMes seem a little pricey.

As for the 2.5inch drives you have mentioned, they can indeed be used to make the overall solution much compact. For the 4x 2.5" drive, do you mean to have like 2 stacks? 2 HDDs in one stack?

Well, yes, a 10 GbE port would be nice but is in no way mandatory. 2.5 GbE is fine, honestly, and even 1 GbE is enough to get faster speeds since now the bottleneck is the NIC and not the drive interface. Most NAS boxes today has NVMe or RAM cache to speed up transfers even for 1 GbE.

I am no expert on NVMe for NAS, but do you think it is necessary to use NVMe designed for NAS such as the WD Red, or else choose any NVMe for this purpose? Because these special NVMes seem a little pricey.

No, while I wouldn’t trust regular consumer drives to hold for 24/7 always on abuse, most home NAS installations do not see that kind of use pattern. Instead you see perhaps 20-50 GB or so written to a NAS drive during a single day. Given that these consumer drives support about 5 000 write cycles (atleast in warranty), and assuming 100 GB written per day on average, that is still over 200 years before a 2TB drive would be bust.

As for the 2.5inch drives you have mentioned, they can indeed be used to make the overall solution much compact. For the 4x 2.5" drive, do you mean to have like 2 stacks? 2 HDDs in one stack?

You could, although I would in that case personally recommend the drives sticking out 90 degrees from the PCB instead, like the Argon EON. What I had in mind was more something like:

Where the connector is in the middle and the four SSDs are lying flat towards the back. Since each SSD is roughly 100x70x7.5 mm, 210x150 should be just enough to be doable. “Should” and “is” don’t always align though, especially in small form factors

I have specifically looking for a POE powered Pi Zero sized formfactor and honestly would love to see more small boards like these with POE as a default over USB power.

Oh, that reminds me…

hey everyone, how would you like to see CHEAP diy PoE ip cameras? rpi could do it, seeed could probably come up with a low cost bill of materials.
rpi zero is probably the perfect carrier given the camera and video capabilities… poe is just the icing on the cake.

eh… I hate cheap cameras because everyone always focuses on the numbers but never on sensor size, low light performance, optical zoom, and optical quality.

I would be more interested in building an opensource firmware based on a RPI but with high quality sensors and optics.

I would be more interested in building an opensource firmware based on a RPI but with high quality sensors and optics.

thats exactly what you get with the rpi zero camera interface. they have big sensor cameras, and cheap cameras, and everything in between… 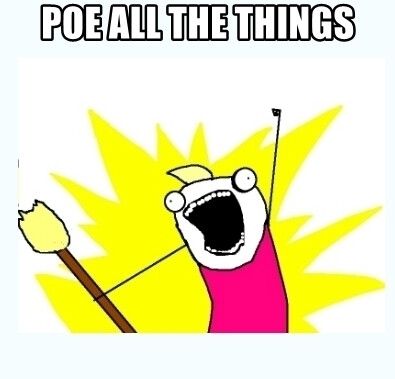 for high-quality sensors and optics, any camera model would you refer to? also besides POE, any other interfaces?

Sony starvis is a great sensor and the dahua camera has good optics.

In band POE with gpio is my dream. I want to build custom network light switches.

Connections for touch displays would be a plus and h.264/5 decoding or even NDI.