Co-inventing with community, what do you do with x86 boards and Raspberry Pi?

not only for x86 or pi boards, i think poe is also a need for Jetson, specificlly for vision applications.

I think what ever you were planning to do with a Raspberry PI you need to switch to PC. There don’t seem to be any PI SBCs for sale. Maybe cheaper too.

I am currently designing a monitoring system for a fairly big estate, involving a 60KwH photovoltaic array, a 60KwH gas co-generator, a geothermal plant, that currently supports a meeting center, a 1000sqm office area, 1500sqm of living area, an indoor pool, that currently is managed completely manually
The monitoring part will be using modbus industrial components for the actual metering/actuators, but I am still looking for an industrial grade solution based on cm4 modules that makes sense and is maintainable, and can be deployed in DIN enclosures to gather, store, massage and display the sensor data.

The newly released edgebox series looks promising, I would be using at least three of them, plus a couple of terminals for displaying and maybe storing sensor data…

As for software, the current choices would be node-red, mosquito, emoncms and one between home assistant and openhab…

The current competitor would be the Revolution pi line from Kunbus, that has a much higher price point but has a a lot of options in terms of modularity and native support of industrial protocols, and custom software to manage a network of devices in as much real time as possible

I am running Nextcloud locally and I have been thinking of setting up a nice big screen on my wall just to show my Nextcloud calendar. I was thinking of e-ink just because I like the look and because I know if I used a normal monitor I would cover my calendar with other windows.

The reTerminal might work for this, but I would love something bigger but still affordable. I don’t need touch screen.

The first thing that comes to mind, to do is to make the reTerminal into a serial terminal.

I have a 6.6kW PV array with a 5kW inverter that I have replaced with open-source firmware because the Growatt cloud app is god awful. I am also builting a battery wall out of 16x280Ah LiFePO4 batteries attached to a JBD BMS, and connected to an internal Sun GTIL2 grid-following inverter. I’ll hook that stuff up via RS-485. The GTIL2 is RS-232.

Another (lower priority) project of mine is to replace the WB2L with something flashable to Tasmota (as wendell already mentioned in the video) because the Grid Connect stuff that Bunnings in Australia sells also sucks.

It’s currently a mishmash of Mosquitto, node-red and Grafana running in containers, I’m looking for something I can jam in the wall that can have custom dashboards and run everything without the use of a “home server”.

There is currently a resurgence of amateur radio.
But the biggest hurdle many new hams face is cost and availability.
Inexpensive and dependable gear is a godsend.

I try to build a wearable separation of display, cellphone, computer and router - all powered via rechargable battery, wearable. and controlled by speech recognition

The seeed screen could make a good SDR

After spending a little while listening to how the “old timers” treat new people on 40 meters I really can’t be bothered getting licensed. They are a bunch of toxic old cootes. It’s a shame really. Pushes people away from the hobby

A bit of weird niche use case for me and my brother is using it as a finance dashboard. Essentially running some automated stock trading software in the background and then having the trade status and profit tracking bits displayed on the screen. The CM4 should be sufficient for running the automated trading software and then we’d just have to build a front end.

Yeah there is that but half of it is their own self anger because technology is advancing faster than they can assimilate it.
Take sdr for instance.
Building a rockbound ( chrystal controlled) or vfo radio homebrew or from a kit.does have a charm to it.
And when your used to it, Introducing a menu driven device with multiple branch tree menu is confusing, irritating, and depressing. ( sort of like every time “winhosed” comes out with a new version)

And you also have band hogs who dont have time to talk to younger generation.
There is a massive infux of the CB mentality ( abusive language) which by the way is illegal on amateur radio.
And knotheads spending kilobucks to buy the biggest and best to blow people out of the water.
Most of them are angry because of the fact that the question pools are on the internet and people are able to study them and pass the tests.

You can advance to the extra class and still know next to nothing about the hobby.

Im an angry old coote myself,

but i feel a duty to educate, guide, and or mentor new amateurs.
But i cant say the same for the others.

Cw( morse code mode) requires a very narrow bandwidth and travels the farthest on a small amount of power, its not surprising to hear a 5 watt signal hundreds of miles away, but ssb ( single sideband voice ) is much wider bandwidth and requires a lot more power to transmit clearly over the same distance.

Aside from being long and hard to understand its just invited immediate segregation and bullying, I listen to a lot of people on sideband just refuse to talk to foundation holders. Its gross

I made a pi zero 2 w photo frame. Not pretty but it works. I use feh (looking for a better one with transition effects) and a folder with links to Photoprism thumbnails, because the screen resolution is only 1024x600. It can be used as a portable retro console, OpenTyrian works great.

The screen + pi needs about 7 W, power is routed through the screen (with touch), then through a 4xUSB HAT and finally to the pi. So it needs just one power cable. Some photos: 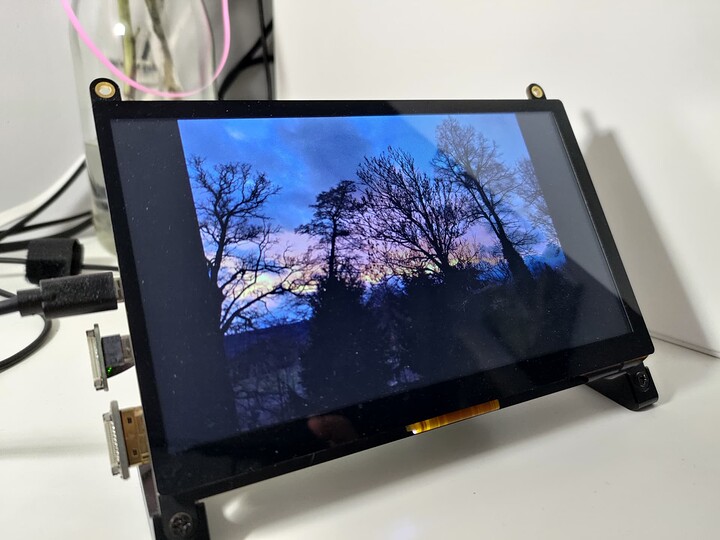 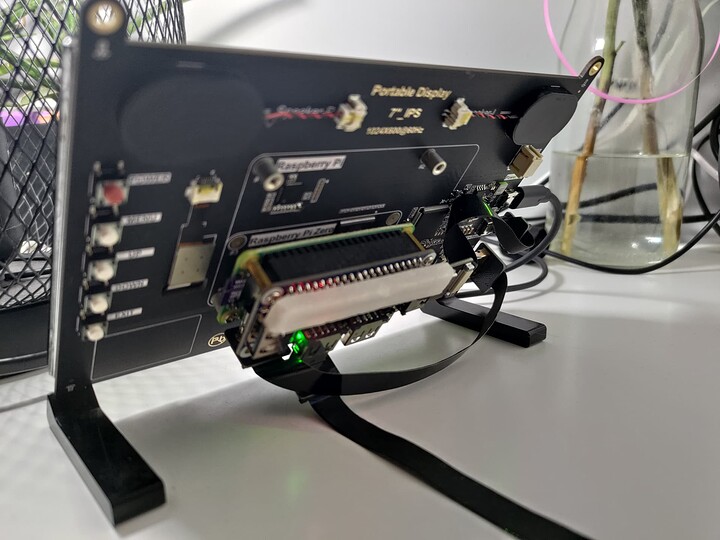 As for me, I want an x86 sbc that has memory expansion slots for 64gb of ram, uses standard atx power supplies, 8x sata connectors, with a 10 gb and 1gb nic and another version with 4x 2.5 gb nics. I’m looking for the cpu to comsume less than 15 watts max. Fast enough to do useful work but wont run up the electricity bill. Above all I want the manufacturers to release updates for the bios in a timely and frequent manner.

My use cases are truenas server, xcpng server, pfsense firewall.

Additionally, I would like to see a board that can take power from a standard atx psu and power multiple pis or sbc that are powered via 12 or 19 volt barrel power connectors.