Checking out the Gigabyte R281-T91 ARM Server | Level One Techs

This is a companion discussion topic for the original entry at https://level1techs.com/video/checking-out-gigabyte-r281-t91-arm-server
6 Likes
anotherriddle December 13, 2018, 7:01pm #2

Honestly EPYC kind of made these not as cool imo

heard what I was waiting for later in video…

We need some power server reviews, too.

I wonder how well this system would work as a render node.

Looks cool. Your enthusiasm is rubbing off on me. So I am curious now.

I couldn’t see any pricing. How is it comparing price / performance to say Intel, AMD, IBM ?

Is this a review unit or do you have a workload it will be used for ?

This hardware is undoubtedly the future of most of the server market.

I expected IO to be much more limited than it is. The existence of this product should really alarm Intel. A big reason that it feels like Intel will never be dislodged from their server dominance is based around what they provide in the southbridge. This server does not seem limited at all in that department.

Be honest, on a scale of one to ten, how big was the smile on your face the first time you typed

Kernel compiled in just 100 seconds on the phoronix test and I think that was mostly io bound.

This platform would be great for docker/kubernetes

Shiny server tech! Nice!
Maybe I can talk my uni into getting one… 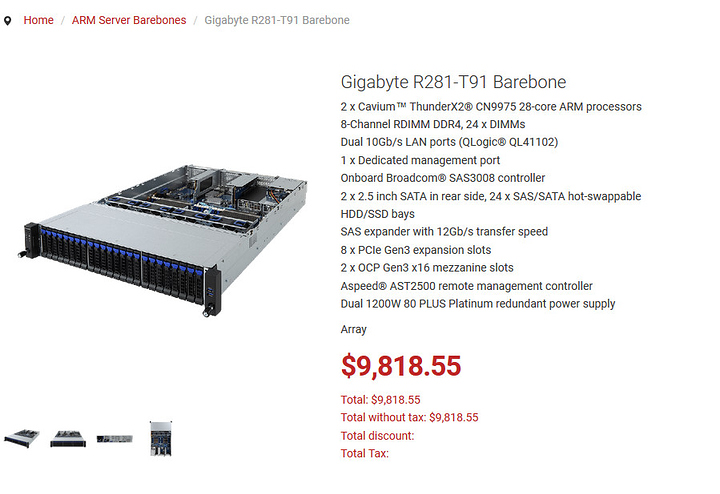 Is probably some major advantages ARM has over x86 in server space.

Don’t forget that advertised pricing is way different when you do b2b orders, quantity etc.

The pricing for businesses is pretty agressive overall from what I’m told.

So the arm 2U is with CPU’s installed ?

Then the workload usage etc ?

I know 2019 EPYC hits 64 core 128 thread cpu’s so 200+ threads is now a thing. It’s just server workloads a can’t judge how to tech is going outside of when I looked up IBM when they bought redhat.

Then Micheal replied to price to performance.

I am so stoked on those!
I think they would be great for docker/kubernetes, tho I work at a company whom just recently switched to containers and the devs write their code almost exclusively in dotNet core, which still seems to have some hiccups on the arm platform… So that use-case is out of the question for us at the moment.

But I wonder how the performance is when it comes to noSQL databases? In particular mongodb or Scylla/Cassandra? We have a large number of those running on incredibly power-hungry machines, and the savings if we could swap over to arm for those would be huge!

Is there any way I could bribe you to test some Scylla performance on that thing?

RISC will take over server-side compute the same way it took over client-side. Heterogeneous SoC’s are the future of everything from mobile devices and video game consoles to workstations and servers. RISC-V is a viable, open-source ISA that’s worth looking into.

Although to ARM’s credit they are experimenting with some cool ideas, here’s Robin Randhawa of ARM and Jeremy Soller of System76 presenting a microkernel operating system written in Rust running on ARM64:

It applies a bit less on supermicro kit. Price Dell epyc vs samey supermicro epyc? Also gotta add ram and cpus to that supermicro. (The 7551p is a nigh I possible value to beat for things that are not super heavily threaded ot tjst scale to multiple boxes easily)