Can anyone actually find the Radeon Vii in the states?

I have looked around for sometime. And have to admit I wasn’t in a place to purchase at release. I suppose the rumor of 5,000 units was true to the fact. I see them over seas and in Canada but these sites are unwilling to ship to the states. shrug Mayhaps I have to wait for stock or missed the boat aye?

Unless anyone has seen them in the wild >_>

I would guess the first batch that shipped was 5k units, the next is now on some ship sailing the world.

I saw it in stock maybe twice on one site… didnt last long enough for me to walk away to get my wallet. 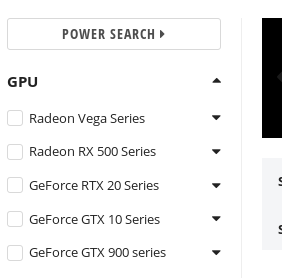 Aye yea that looks the case most places, I ve seen it removed completely on some sites. And I do hope it is out on a ship with many others.

I haven’t looked too hard, but I’m struggling to find them, too.

I wanna rip out three cards, upgrade them to VIIs, and finally decomission the last Nvidia card I have in use. AMD’s making it hard.

the only place ive been able to find them is ebay, but you can only get 3, maybe 4 listings in before prices get inflated

I bought mine directly from AMD, and got another refresher email when they came back in stock. I’d suggest signing up for that.

I did not actually get the refresh email huh. But I did just nab it from AMD

I bought mine direct from AMD on the second round. Unfortunately, this was a bad move. AMD takes their warranty very seriously.

My card is defective. I have been working with AMD now for over a week responding to their requests. I will go through those below

First request was as follows: Description of system, including PSU power rating, switching output ports (not possible as the TV i connect to is hdmi only), question on the bios of motherboard, and finally move the GPU to another computer and test. I responded to all of these.

Second request: Update to new driver 19.2.3 and retry, on both computers. I responded that new problems arose and old problem still there.

Third request: Provide picture of interior of pc case, video of problems on screen, and send over dxdiag for the pc. Did that.

Fourth request: Go out and purchase (with your own money) a display port to hdmi adapter and try the card using all three display ports instead of direct HDMI out.

At this point i am waiting for delivery of 1.4 display port to hdmi (hdr capable) adapter.

It will be two weeks by the time i receive the adapter. I was in the process of speccing out a new threadripper build with a $5,000 budget. I am seriously at this point putting the kibosh on that.

Will now probably spend more and buildout an intel build to avoid this issue.

Unfortunately, this was a bad move. AMD takes their warranty very seriously.

That is the first time I hear someone complain about too much warranty service.

Will now probably spend more and buildout an intel build to avoid this issue.

You have a problem with a GPU, not a CPU. AM4 (especially with Ryzen 2) is a very nice platform.

When I started looking for GPU’s recently I saw one in stock on Newegg, but I stalled because I wanted to do a little research first because I didn’t even know it existed until someone posted one in the recently acquired thread here. A few hours later it was sold out. Haven’t seen them in stock anywhere else yet.

For reals though, the online retailers sold out within a couple hours at most and AMD themselves seem to be one of the best bets for stock soon™. Cards from AMD only have a one year warranty while the AIB labelled cards have two years I believe.

I could tell you a worse story with a Zotac 1080ti :(. So far Nzxt has been my best experience with customer satisfaction. These being, Asus, MSI, Corsair, Zotac, Sony, Dell emc, hp, evga, microsoft. Nzxt was by far the easiest pleaser and just down right straight to the point fixed the problem. Zotac sat for over a month before ever replying to my ticket. We did the same rude back and forth afterwards I was sent a used 1080ti for mine. Refurbished. With clear damage to the cooler and back plate. The same issue occurred again and it died in 3 months of return.

EVGA has been good for me. Bought a b-stock card from their website and it died after a couple months.

Emailed them basically saying “Shit’s wack, here’s a video of what it does” and a few hours later I had an RMA setup for it. Sent the broken card in, waited a couple days, and the replacement card was in the mail.

That all sound like what I would want from a warranty service, except…

Fourth request: Go out and purchase (with your own money) a display port to hdmi adapter and try the card using all three display ports instead of direct HDMI out.

I can understand them wanting to test that but going out of pocket for it is a bit much. I would not agree to that and push back.

Other wise that sounds amazing. Often times they will find something along these steps and then go to fixing rather than RMA if possible as it is better for both parties.

If anything that would encourage me to buy more from the same people.

There has been no warranty service to date. What has occurred has been them asking me to figure out what is wrong with the card instead of them giving me an RMA, ship me a new card and they figure out what the problem is.

No. What should have happened was they should have issued me an RMA, sent me out a new card, asked me to ship them the card and they figure out what is wrong with it. In essence, at this point in time, i have purchased a $750.00 paper weight. Its unusable to me.

It all sounds like a big inconvenience if you actually know your card is defective. Maybe they should go through this process with someone that is on their second card (to rule out user error), but with the first exchange they should really just send out a new card no questions asked. That is the kind of service I would expect anyway.

Sounds right to me. Been through a few RMAs most play out like that. They have the user test for various faults and then go ahead and issue an RMA there after.

There has been no warranty service to date.

Yes there is. They are in contact with you trying to find out what the problem is, maybe they do not even have to ship product back and forth.
AMD is ruling out user error before any party spends more money.

It all sounds like a big inconvenience if you actually know your card is defective.

There is a reason customer service asks questions like “is the wall socket the device is connected to powered?” and “did you turn it on?”.

And just loose 80 bucks on posting and another 20% on two products which are now open box?
In a service contract, I could see that. For consumer goods, no.

Sounds right to me. Been through a few RMAs most play out like that. They have the user test for various faults and then go ahead and issue an RMA there after.