The 1.4dp kvm is about 90% done with engineering. Probably going to be one USBc port and 3 dp ports. USBc gives a free booster with USBc/dp chipsets because they’re all sketch. Perfect for Macs! Lol

Can’t wait. That will fit my use perfectly (dp workstation usb c laptop plus ports for tabletop projects).

Do you do trade-ins? lol

Wendell, have you tested this monitor with Ubuntu? It’s oddly specific but I’m running 19.04 at the moment and have ordered over half the parts for a new tower for the 3950X I plan to place inside it.

I plan to run Ubuntu on that also. I was in the process of mulling which monitor to get when I saw your review (although I still can’t find that Dell 43" you referenced in the video. Is it 120hz?).

In any case, I was wondering if the ROG works fine with Ubuntu (more specifically, sharp text).

if you adjust the OSD, then the text will be sharp, yes.

It’s from the early days when we didn’t have good stuff to do reviews though.

Thanks for the info. I did happen to find that particular model but dismissed it — I incorrectly assumed the DELL you referenced in the ROG review was also 120hz so I was looking for something which did not exist.

As for your early days comment — I watch for the granular information in your videos with production quality being a distant afterthought.

I think the Philips Momentum 43 has the same issue with the subpixels. Would the registry hack work on that one as well?

Don’t see why not? Give it a try, and let me know?

Will do if I pick one up. I see there are several ones being sold used for about 500 dollars in my area (Norway). Will have to sell my Acer XB321HK first though (which is in for repairs).

I got one of these two weeks ago and have been really struggling with the cruddy text quality at 100% DPI scale. It goes beyond the BGR subpixel layout issues which I am well aware of.

There is a bit of a vertical blurring, where the brightness of a pixel is affected slightly by its neighbors above and/or below. This problem is strongly affected by Shadow Boost. Shadow Boost level 0 has it worst. It is better at Shadow Boost level 1-4, but the effect is still there. Interestingly, this only happens on the upper 90% of my panel, with the effect fading such that the bottom 10% looks okay.

Asus support thought that replacing the monitor might fix it, but I am suspicious that this is just considered “normal” for the panel and that a replacement would do no good.

Can @wendell (or anyone else with this monitor) please try the lagom sharpness test (http://www.lagom.nl/lcd-test/sharpness.php) at a few different places on the panel, and report back the results? This is the test I’ve found which most easily demonstrates the problem.

Here’s a photo showing 3 monitors side-by-side with the XG438Q failing the test: https://imgur.com/86xi0Dg

The same issue also screws up the rendering of the gray-on-black text in that chroma subsampling image: https://i.imgur.com/uhDvHig.png Most noticeable with Shadow Boost at level 0. 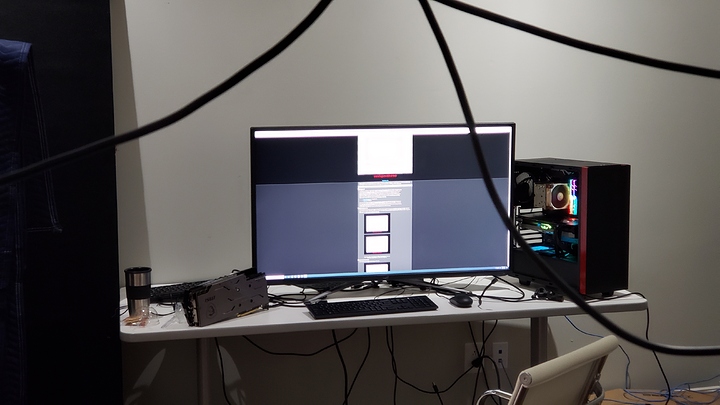 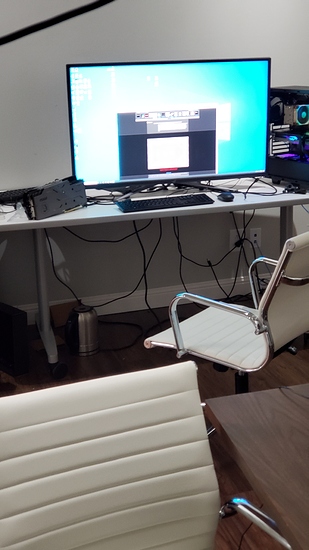 I can’t tell a difference in sharpness from the top of the panel to the bottom? It does have a little bit of the checkerboard when I squint my eyes though which suggests the sharpness isn’t high enough ?

Any chance your cable is too crappy? 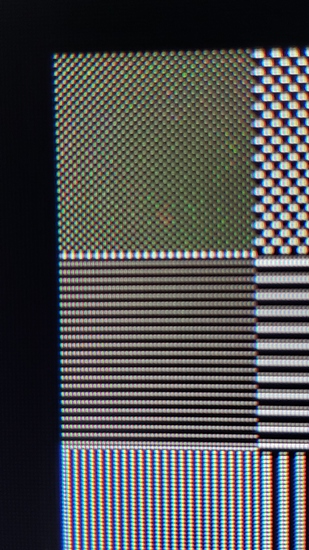 Thanks for trying that. Your distance photos are too overexposed to see the test image

But the close-up photo tells me that your panel does in fact have this problem, if not exactly the same, then very similar. Yours might actually be worse than mine.

See the thick horizontal stripe pattern in row 2 column 2 there: 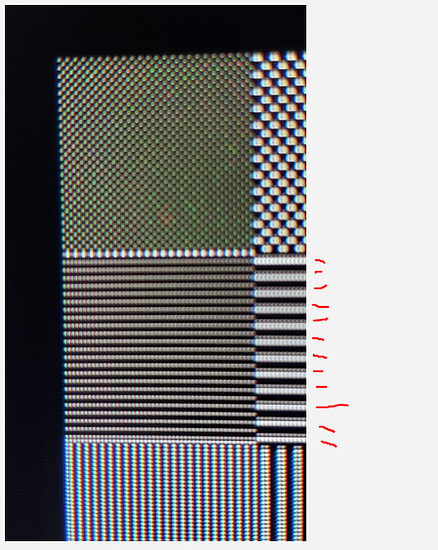 Each horizontal stripe is supposed to be two pixels tall, alternating between black (#000000) and gray (#9F9F9F). Your monitor clearly isn’t rendering that properly. It looks like you have one row of black, one row of gray, and two rows of lighter gray. Three distinct shades. Maybe even more, as the lighter shades seem to vary in brightness across the space of that pattern!

Here is how mine renders that.

Two rows of black, a dark gray row, then a light gray row. 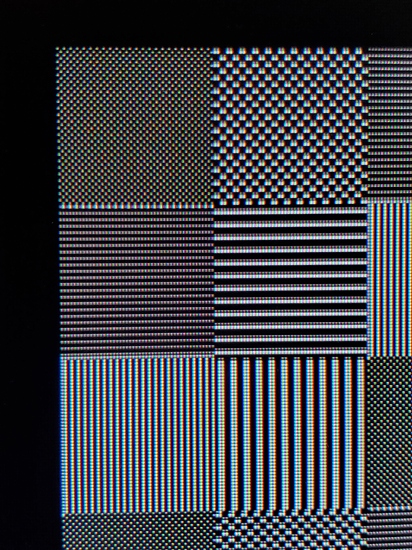 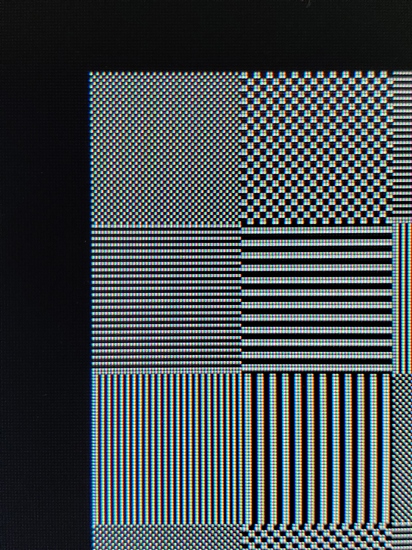 I’m not sure that my cable is perfect, but I have tried two cables. One, a Cable Matters from Amazon in 2016, and the other, briefly, the cable that came with the monitor. Both were the same with no obvious flickering issues or problems reaching 120hz (8 bit color).

This better? After a bit of fiddling this is what I got. I wasn’t sure what to look for. The first image was the default 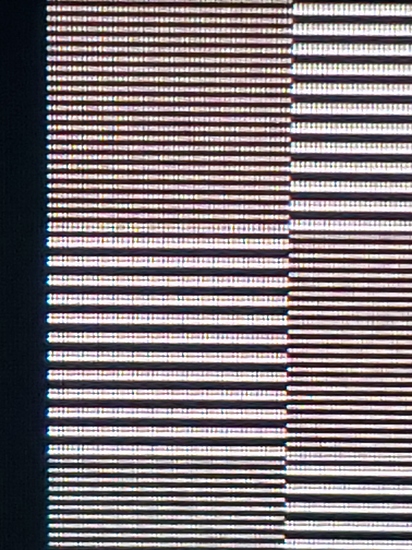 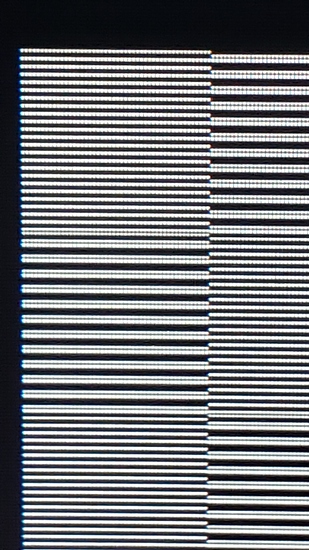 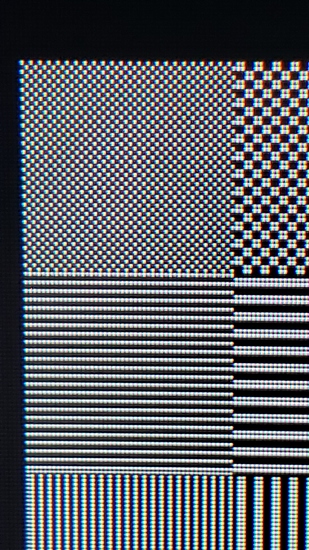 It does seem that you managed to improve the rendering. What did you change? I’m guessing shadow boost and maybe brightness/contrast?

I hate having to use Shadow Boost to mitigate this problem because of how much it destroys the black levels on the monitor.

shadow boost level1 mainly, but you might experiment with gamma and saturation. I started with the srgb preset, but the rts preset also seemed to change the way stuff was happening.

You could return it and wait for the xg43uq which I am still contemplating myself.

I’ve played with every setting in the OSD and Shadow Boost was the only thing that really makes a difference.

I’m going to return it this week and, sadly, go back to 60hz until a 144hz monitor without such a glaring flaw is available.

I don’t know where these guys got their data, but it looks like AUO is making all the panels for 43 inch 4K gaming monitors, so I hope the 144hz / HDR1000 panel doesn’t have the same defect.

if they are, I feel confident that firmware updates will fix this because I doubt very seriously it is the panel itself doing it. I should see if I can get a third party panel controller and experiment. Probably the revenue 500k+ subs if/when we get there would let us do that kind of thing.

It made no perceptible difference in the sharpness test or for text legibility. It did not even reduce the red/green noise which you noted in the upper-left sharpness test pattern.

Oh well. I certainly tried, and now it is back to the waiting game.

I have some super dodgy, but consistently dodgy, cables I’ve collected from customers and amazon over the years. I have one that makes it look like its always snowing on this panel. It’s glorious.

if you’re getting noise from a good cable, it’s almost like its a de-burnin algorithm like you have on oled and old school plasma screens… hmnm

Does anyone know where can I order this Asus XG438Q right now? Thx

If you are in the USA, you can try Amazon. They currently have one “renewed” for just $900. 3rd party seller.