Both TFTCentral and Techspot now have reviews up for the Asus ROG Strix XG438Q monitor.

I’ve been running with an AMH399U since @wendell and co reviewed it back in 2015, so the increased refresh rate is super tempting, but the black smearing and text issues with BGR pixel layout that they comment on are a little concerning. As someone that’s been running a korean 40" VA panel for the last 4 years, am I right to worry about these issues or are they relatively insignificant compared to the improvements this screen will have over the AMH399U?

I was wondering what thoughts the folks here had on this monitor. You think it might be worth a punt? Or to sit tight and see what other manufacturers come up with?

Here are my 2 cents:
Image quality trump’s the rest.
I have moved from 60hz standard monitor to 1440p 75Hz variable refresh rate monitor. I do not notice the sharper picture because of the higher resolution, I don’t really notice the smoother gameplay because of the higher refresh rate. What I do notice is the noticeably superior image quality. The new larger screen is IPS while the older one is a pretty good actually TN panel. Yet the best advantage other than the size is the image quality. So there’s that. If you think you will lose image quality I would say it’s not worth it…

Techspot is also Hardware Unboxed and they have a video review up.

The most annoying thing though is the non-standard pixel layout: 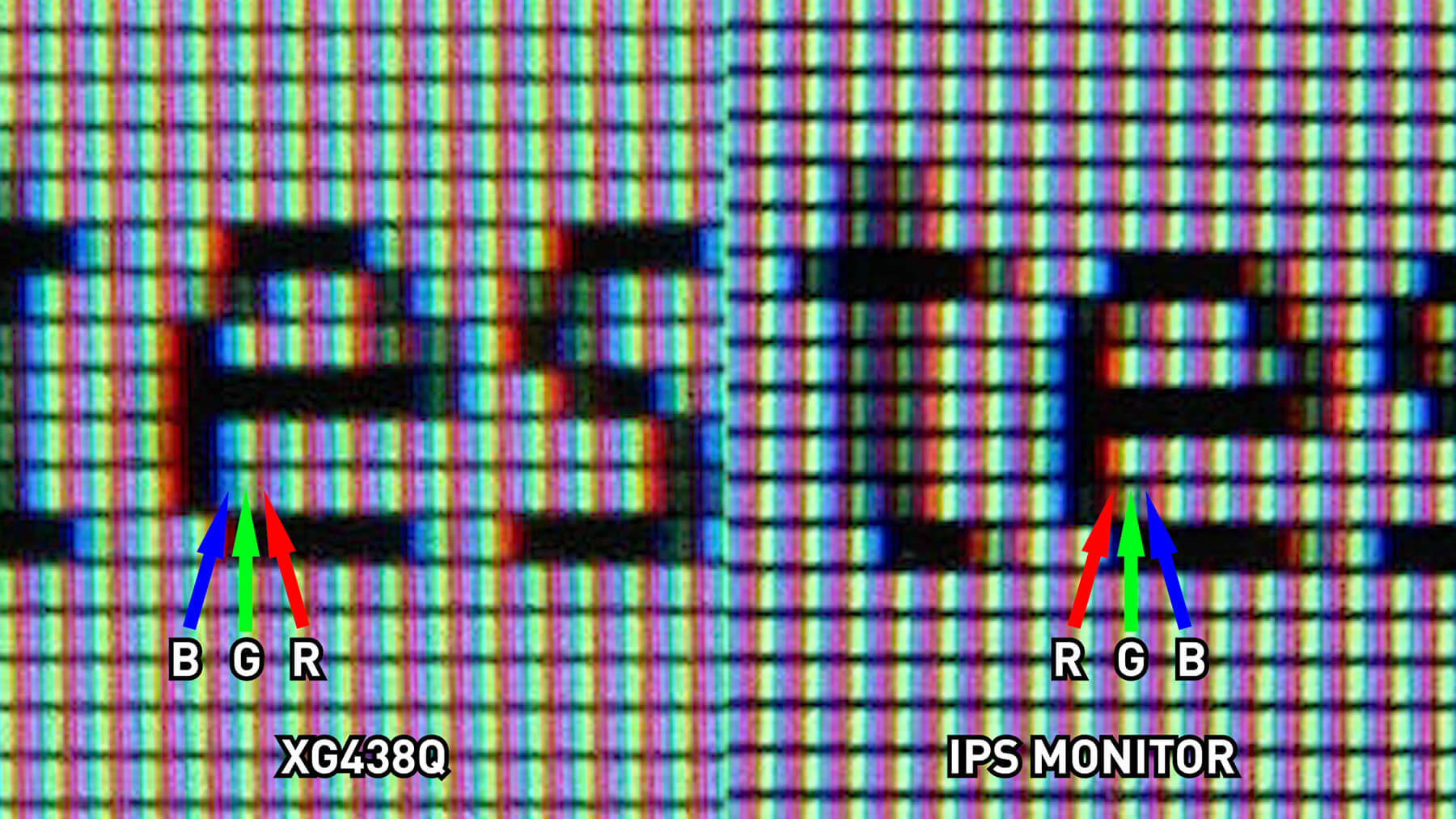 The pixel layout means text looks blurry and not crisp.

I read a bit about it on reddit where the user also has issues with the text, but there seems like someone wrote a nifty program to improve the issues with ClearType.

Seeing as it’s not yet in stock in the UK I’ve got some “cooling off time” before I decide if I’ll pull the trigger on this screen. Might get it when it appears on Amazon for ease of return if I hate it!

Soon to be another from our very own @wendell!

Looking forward to this one!

You should be able to set ClearType on windows to use BGR instead or RGB. That will fix the text issue.

Though if you use multiple monitors that are different subpixel striping Clear Type can only support one for the while system from what I read.

There are some odd defaults in the rog monitor settings that need cleared up. I have a thread about this monitor with color profiles and stuff that’ll go with the review

Where can I buy this monitor right now? Have money but dont see they selling it anywhere.

I sniped it on Newegg myself

I was looking at the Acer Predator CG437K when I found that the 2019 55" LG OLED TVs support gsync/freesync at 120hz at around the same price… Is there a compelling reason to go with these 43" monitors?

Also still unclear if the Acer is BGR or RGB. There are conflicting accounts about it online…