I have had the Asus Pro WS WRX80E-SAGE SE WIFI motherboard for less than 2 months, running the 64 core and 256gb ram. I have been using it with the vga output not a gpu. It ran just fine for weeks, but today it wont turn on. I checked the cables. I changed out the PSU to make sure that wasnt issue. I get power to the board, but when i try to turn it on, nothing happens. 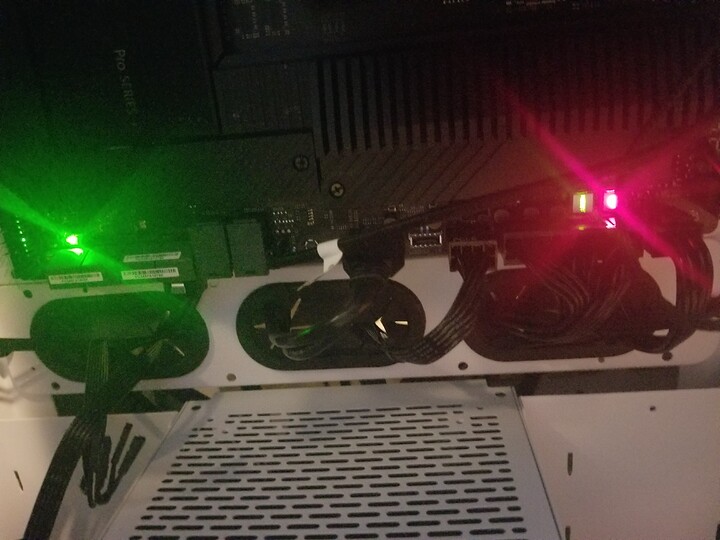 not sure how to do that. It was running on wifi not Ethernet. It doesn’t even turn on. just the lights on the leds and buttons.
the green one blinks constant. I could plug in to Ethernet but not sure how to access from there. It’s as if the power switch is not sending to psu to turn on all the way. I have tested psu and even switch to another one to make sure. I unplugged the front panel power button and tryingt he on board power button… no joy.

If you can access your routers DHCP server when you plug in the Ethernet port it’ll ask for an IP even though it’s off.

The blinking green light is the heartbeat of the ipmi. It can probably tell you why it’s not coming on.

Did you miss a motherboard standoff maybe and it’s shorting out something?

Yes, do that as @wendell suggested. Do you know how to see what IP addresses are being used on your router? You’ll want to determine which one is this computer.

If you can figure that out, you’ll be one step closer to resolving the problem. Once you have the IP, just type it into the browser on another computer on the same network - that will access the IPMI on the ASUS motherboard. As long as the green light has a heartbeat flash you’ll be able to talk to the motherboard. It’s very cool stuff.

thanks ill give it a try. otherwise will send off for RMA.

Oh, don’t RMA it just yet - likely something totally fixable.

Do you know how to see what IP addresses are being used on your router?

You get get something like Angry IP scanner to sus out the ip address of the IPMI
https://angryip.org/

wasn’t fixable, RMA replaced board with new one.