Try the cards one at a time? If that works, probable cause might be an IRQ conflict? Are you connecting via the BMC or directly with monitor and keyboard?

Thanks for asking.
I just removed all cards except the Adaptec RAID card.
Still no go.
Physical keyboard/monitor.

I’m seeing similar threads with other motherboard manufacturers (supermicro) but those were resolved with a BIOS update. I’m already on the latest BIOS.

I’ll try updating the card firmware using a donor PC and see what happens. The firmware is pretty dang old.

Update: I’ve been working with Asrock support and they suggest an RMA of the motherboard. Go figure. I’ll post an update if this finally solves the problem. Might be a month before that happens though haha.

I’d be very surprised if RMA would result in anything else other than “yup, our pre-defined set of tests passed, there is nothing wrong with the board”. I mean I guess it’s possible they find something but I wouldn’t hold my breath.

Honestly those kind of problems smell more like one of the following:

I have a Ryzen 5 3600 and the following BIOS and BMC Firmware: 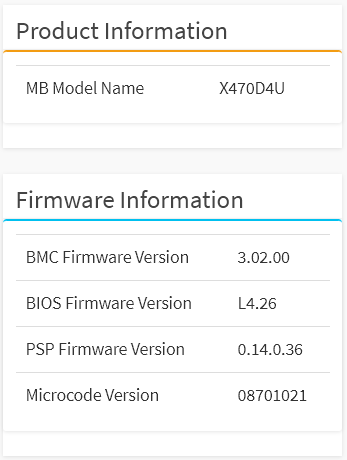 Which is… not really what one expects from “System Inventory”.

@Apple2c You have the same issue as I have, but you’re on a newer, but still supported CPU and the latest BIOS+BMC, so what Asrock told me is essentially BS

Next course of action could be:
a) I’m contacting Asrock again, show them your data and thus calling their BS or
b) you contact Asrock without my involvement, using the data you showed here and report on the answer(s) you get from them

Then we’ll await what they say.

@wendell Mind keeping an eye out for this and if necessary use your contacts to get stuff moving? If you provide an email address I’ll forward you my recent exchanges with Asrock Rack Tech support. TIA!

PROBLEM: PCI Express bandwidth available for this adapter is not sufficient for optimal performance.
ACTION: Move the adapter to a x8 PCI Express slot.

Also was anyone able to upgrade the firmware on the onboard X550? Sadly it is not able to do 2.5 Gb etc. The new driver will show it as an option but it will not work.

Those cards were designed to work with old BIOS, so UEFI + legacy mode doesn’t seem to be working properly.

I’m using a SAS card (HP P800) and it only works in HBA mode (so no RAID config). For the motherboard to post I even had to actively block booting from the OptROM before inserting the card. Anyway, hardware RAID doesn’t make much sense nowadays, you’re just vendor lock-in yourself, better go with ZFS.

I think you’re just wasting time RMA’ing the motherboard but, just in case, come back here to keep us updated!

@Apple2c thanks, Think I might try the beta bios before I throw coin at new CPU.