I’d be interested to hear how it goes with your build.

I’m still waiting for my board to be delivered. Here in Germany it is 3 - 5 business days delivered (meaning, nobody has it directly in stock).

I’m still waiting for my board to be delivered.

ASRock Rack states on their website, that the X470D4U2-2T with BIOS 4.10 would run a Ryzen 5 5500 but it is not! I have to update to the latest beta BIOS 4.14 and with that, you can’t disable SMT anymore. Now I am begging for months for a fix but they never have time…

Solution: I had the AMD Wraith Prism cooler left over from the Ryzen 7 3700X, which I never used (My motto: If it glows, it goes.) The cooling block of the Wraith however fits PRECISELY, leaving exactly enough room to install a normal height DIMM in the A2 slot.

I replaced the transparent glowing LED fan unit of the AMD Wraith cooler with the Noctua NF-A9x14 PWM fan from the NH-L9x65 cooler. Now nothing glows, and all DIMM slots are available. 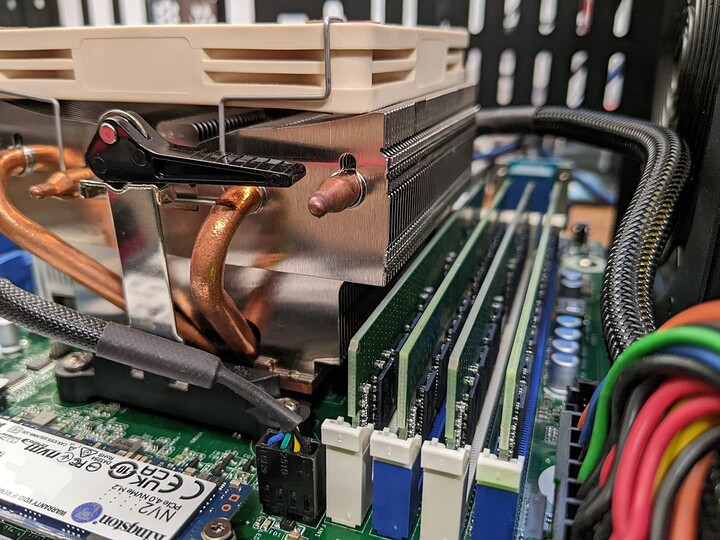 I just want to give some feedback for the folks that are looking for feedback on working modules. The following works:

I just did a very basic comparison of the same TOSHIBA MG08ACA16TE HDD hooked up to the X470D4U SATA port (one of the native ports, not the external ASM1061 ports) and then also attached the drive to a port on the LSI SAS3008 HBA that is still in the Supermicro server. 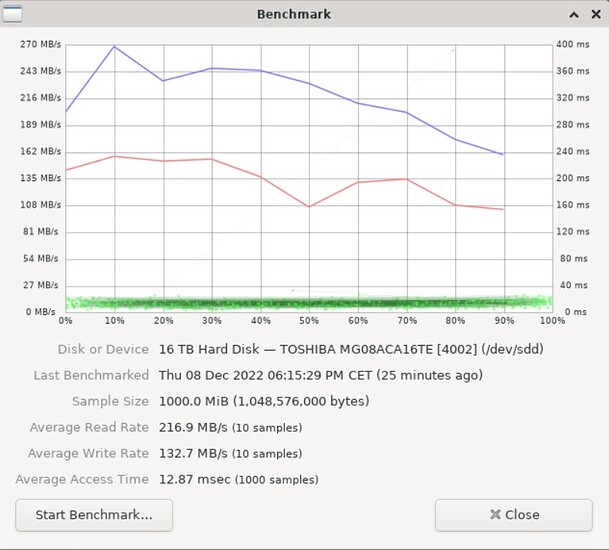 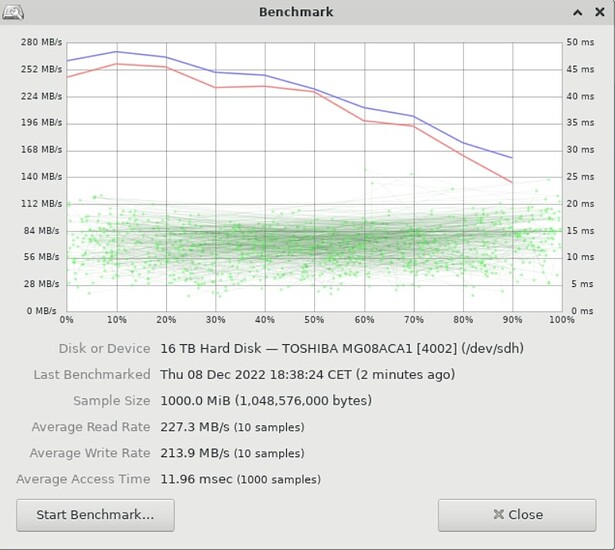 Result: nope, X470 SATA Ports are not going to replace your half-modern HBA. There’s I guess no way to save the 14 Watts that the HBA is pulling with on-board SATA. Oh well.

Write caching on the HBA?

Would be interested to see the ASM results, can’t understand why there would be such a big difference without caching getting involved somewhere.

Here is the same Toschiba drive attached to one of the ASM SATA ports of the X470D4U: 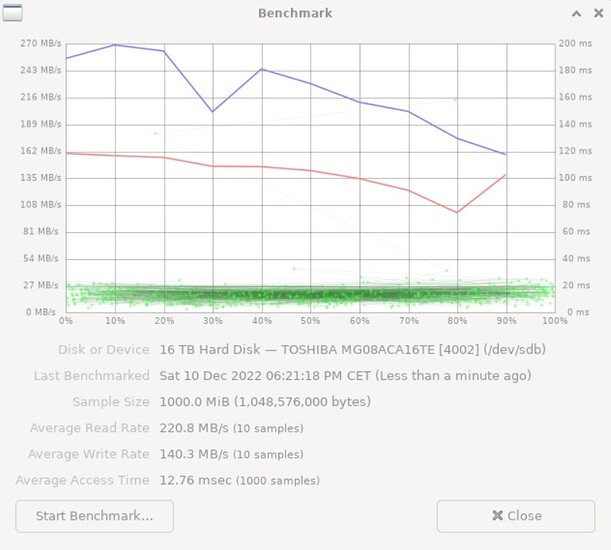 The is/was empty (unpartitioned) and in fact new in all three tests (done with the “gnome-disks” program).

The LSI 3008 HBA has 7 other disks on it, so, it has some other stuff going, whereas the X470 currently is still waiting to assume duty and has absolutely nothing going on. The LSI HBA is in IT mode has no caching of its own, but I imagin the latency will be influenced by the fact the card is serving several disks in a ZFS pool at the time that one new drive (not part of any pool yet) was tested…

Anyone know why 4.26 is seemingly stuck in beta? Other boards take priority? Are there any issues with 4.26, is it stable enough to flash? 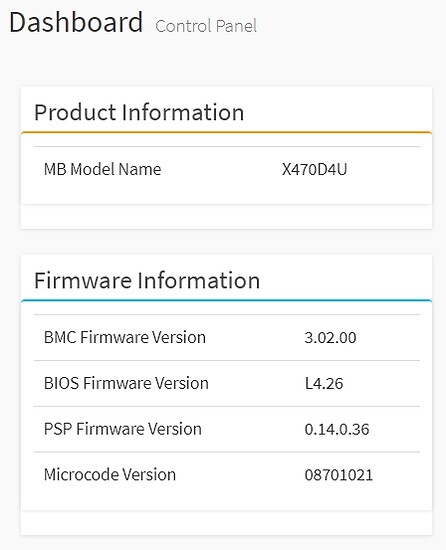 I just got the board a week ago, and it has not yet assumed home-production duty yet.

I also reduced the PPT to 45 Watts, and that seems to be working just fine too.

For the folks who are using this board:

On the newer BIOS I see the following settings:

I lack a PCIe 4x NVME adapter to test this, but I would be interested in one if it works.
Otherwise the the same effect is ofcourse having two PCIe 2x adapters one each in the upper and lower slot… but you need to know which it is before getting two or just the one card. 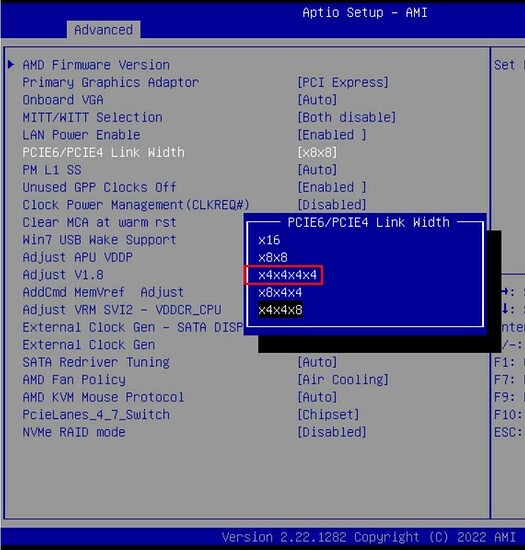 Thanks to anyone who has knowledge of how to interpret this option.

And since the discussion was of the long standing BETA 4.26 BIOS, this option and its description are very interesting: 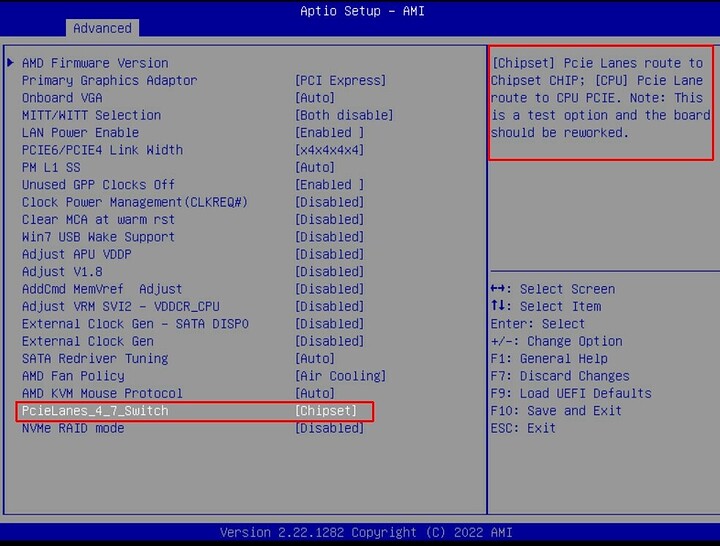 Maybe I should just try it… I was kind of chicken, but surely things will just not work instead of exploding.

after running the X470D4U stable (with some minor issues) for almost two years, yesterday we got random crashes of Debian Linux during boot. After the crash the Mainboard is dead. It doesn’t do anything when pressing the power button. You’ve to replug the power cord to make it work again.

After a lot of debugging it seems to be an issue with the Seasonic Focus Gold 450W. When temporarily switching to a Corsair CV450 we had lying around the issue seems to be fixed.

The error was always reproducible when using the power cycle feature in the BMC. The board turns off, does a click sound, then does another click sound, turns on for 1s and immediately turns off again with a click sound. This does not happen with the Corsair PSU.

Somebody has an idea what’s happening here? Is this just a corrupted PSU after running 2.5 years 24/7 or is this some incompatibility? I don’t if I should buy a new Seasonic PSU as a replacement or choose another manufacturer.

OK, having had my board for a few months now, I noticed an issue: the system inventory isn’t updated. At all. CPU? Can’t see it. RAM? Vanished. PCIe cards? Nope, nothing to see. The only thing it actually reports is the fan speed. I tried resetting the BMC, no dice: still nowt.

Any suggestions solving this before contacting Asrock?

Yepp, that was what it ended up being. =)

Interestingly, each and every one of the four NVME connections on the four-way bifurcated x16 slot is in a separate IOMMU group! How cool is that?

Very handy, as I can add a fourth NVME and assign it to a VM instead of setting up a whole other motherboard to prepare a new RHEL install for another server that needs to keep downtime to a minimum.

The ASrock board is just cool.

System inventory doesn’t work with the beta 4.26 BIOS either… maybe it’ll never work?
But, unless you have tons of servers in use, maybe it’s not such a big deal?

@Apple2c Thx for confirming that. I’ll contact Asrock if this is expected behaviour and/or what we as consumers can do to fix it. Except buying another CPU that is

Just recently got a X470D4U, noticed the VMedia settings don’t persist when the BMC restarts. Somewhat annoying as I think TrueNAS tried to do SMART tests against the virtual devices and caused a crash. Not 100% on that since I don’t know exactly when the crash occurred other than both time it has happened, the SMART test was scheduled to run during that time frame.

@Apple2c Well, I got a response from the engineers: update the BMC. So I did, from 2.20.00 to 2.32.00 and I was unable to connect to the BMC again. I then flashed it back to 2.20.00 as the Linux system that’s installed worked just fine and I could SSH into the system to run the socflash tool Asrock has on their download page for the X470 boards. Fortunately I had the foresight of obtaining all BMC updates including the current one (2.20.00) so it was fairly easy if you know your way on the Linux cli. I then tried 3.02.00 just in case, but unfortunately the BMC was no longer available via the network, again

The engineers told me my CPU (R7 1700) is too old and the system inventory page was a later addition so it won’t work unless I get another CPU.

Of course, there’s the BIOS as well, but that wasn’t gonna change as 3.50 is the latest version for 1st gen Ryzen (1000 series) CPU’s. So, next question: what CPU do you run as you’re on the Beta version 4.26 (note: BMC and BIOS are different beasts!)

@2FA SMART is not intended for virtual devices, only the underlaying bare metal hardware. So disable SMART on said devices to fix that problem.

Yeah, no kidding it’s not intended… TrueNAS has a “all disk” options which I used as I had disabled the vmemdia devices. They came back though when the BMC rebooted which I didn’t expect.

Hey guys I’ve been banging my head over this for the last few days, hope you can help. I am unable to enter the BIOS setup menu of anything except the motherboard UEFI. Let me explain:

I can’t get into any setup ROMs outside the UEFI.

I tried disabling UEFI everywhere and setting every boot option to Legacy Only but that still doesn’t work. 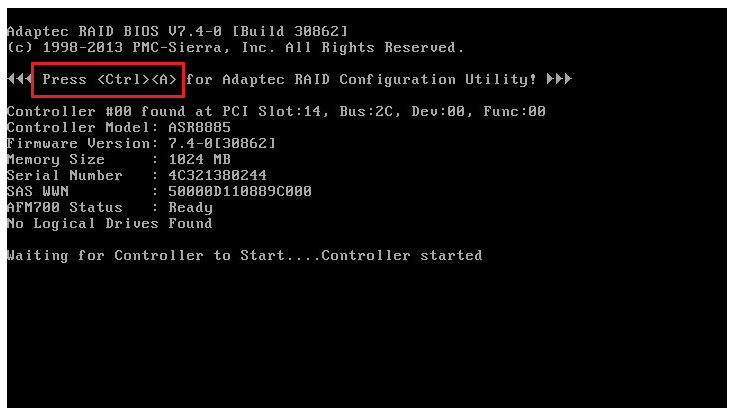