I just asked ASRock sales via [email protected] email address if/when ASRock would be releasing an ITX motherboard for the AM4 platform. This was JC Chung's response:

First text block in this image is me replying to the above email: 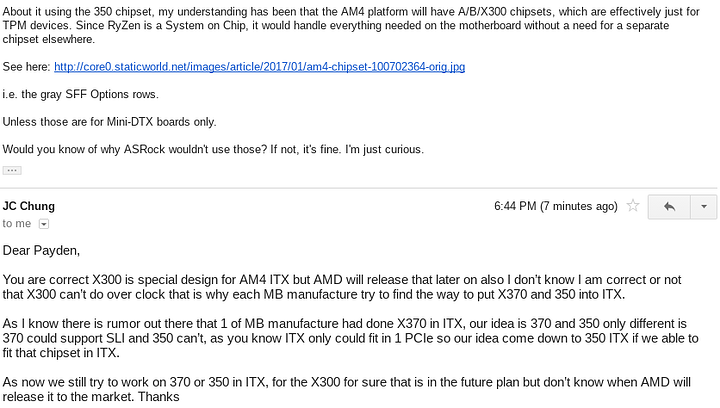 Yes, my name is Payden.

I am excited for this ITX board, but was hoping for some magic to be done with the X300 chipset boards. I figure since the chipset would be very small, you could fit other things on the motherboard that you normally wouldn't see in an ITX form factor.

You get the idea. Something ITX normally doesn't have.

JC's logic for going for B350 on an ITX form factor makes sense. Unless you consider external GPU enclosures via Thunderbolt or USB 3.1 Gen 2 (if this board would have a port for that).

Still, I'll probably grab this ITX board before switching to an X300 chipset ITX board once they are released just so I can get a PC again for a while.

I hope the information isn't super secret info, because the sales guy could lose his job if it is...

Because a load of people holding out for your new product is a bad thing?
Would be really upset if the worker lost his job.

Saw an article somewhere about an Asrock ITX MB so it was already out.
I am eager to see what OC can be done with the 350 chipset compared to the 370 boards

I'd think the two would be similar, the only differences between the X370 and B350 chipsets are really just the IO and multi-GPU. The design of the power delivery will probably play a larger role in overclocking capability.

Link the article please. I've googled pretty much every day for the terms "ASRock AM4 ITX Motherboard" and have never seen an article about one. That's what made me decide to email them.

Sorry I got Gigabyte and ASrock mixed up, total brain fart.

Gigabyte working on mini-ITX AM4 motherboard

Based on B350 chipset While there were plenty of mATX and ATX socket AM4 motherboards, the mini-ITX motherboards for Ryzen CPUs have been pretty rare...

Really hoping these boards have overclocking!

You are correct X300 is special design for AM4 ITX but AMD will release that later on also I don’t know I am correct or not that X300 can’t do over clock that is why each MB manufacture try to find the way to put X370 and 350 into ITX.

Based on that, I'm guessing ASRock intends for the ITX boards to be overclockable since that's a major draw for RyZen. The chipsets themselves can handle it, so it'd be up to manufacturers.

looks like they didnt make the mid april mark

That is true. However, I did find this.

Translated to English via Google Translate:

Asrock and Gigabyte are expected to offer their first mini ITX motherboards for AMD's AM4 socket from early summer 2017. Asrock speaks of a market launch in June, Gigabyte of one in July. According to current information is only biostar with a publication in May.

Biostar has so far been the only manufacturer to officially present mini ITX motherboards for AMD socket AM4 . The Racing X370GTN and the B350GTN - two completely identical PCBs - are to be available from early May . A little later, the other manufacturers will follow. A Reddit user asked at the US support offices of the "big four" and received precise information from Asrock as well as Gigabyte - it often happens that press contacts do not have such information at all or only under the hand.

Asrock expects the first mini-ITX motherboards for the AM4 socket will be released next June, Gigabyte is expecting the next July. No information is available from Asus and MSI. At the latest in the summer, however, small AM4 boards should appear, as well as the impact mainboards at Asus, for example, the impact mainboards, which are trimmed to high-end despite the small amount of space and cost a lot accordingly.

What chipsets the manufacturers use are exciting. The Racing X370GTN from Biostar already shows that it barely needs the X370 on a mini ITX board, because simply too little space is available. In contrast to Intel's socket 1151, the manufacturers do not rely on the top model to allow OC. Small B350 motherboards could be the most interesting. The A320 does not provide OC support and the X300 does not have any additional peripherals - four USB 3.0 ports on an integrated Ryzen Southbridge are likely to be too short for many users.

Not worried about two m.2 slots, sure it be nice but I really need this board in May not 3 months from now.

Also if you look around on that site there are more 350 boards!!

I think those are just micro ATX boards which isn't ITX. You can tell a ITX board as the PCIe slot is jammed right up against the bottom of it (unless a riser card is used).

AM4 ITX ASRock boards spotted at NCIXUS, but out of stock atm.

For some ungodly reason, the price is inflated.

Now just to wait for a reasonably priced one. I believe they were supposed to be $170 for the X370 and less for the AB350, but I assume these are placeholder prices. AKA scalping people who can't wait to pre-order effectively.