So a few monts ago in the deep snow I had an emergency run into my town. I went my normal route, but it was a blizzard so I was going about 20-25. Where I usually drive had some houses going up (BTW its the worst place to put a house, in the middle of a wide corner at the bottom of 2 hills… You’re asking for a drunk to come piling through your living room window). However, someone decided it was a great idea to put a neon white blinking light on top of some shitty trailer so I ended up in the ditch because it caught my attention. I bent my control arm in my truck but it coulda been worse. If I was going any faster than I was I woulda hit a pile of boulders that was 8 feet in front of me.

Anyways. Now you have context. 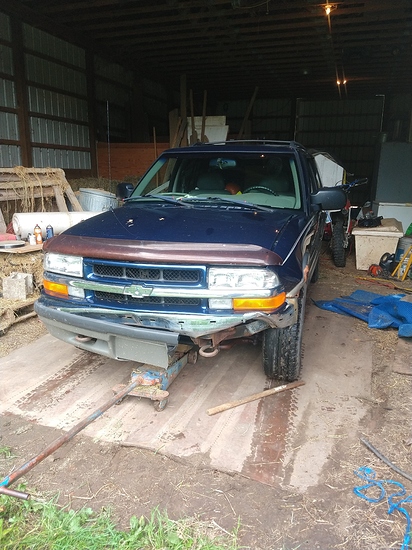 2000 blazer with every option on it. My heart sinks every time I see the front tbh but I’ll get that all patched up soon enough.

So the predicament here is I don’t work on vehicles at all and my dad + his friends have never done this job before. So pretty much flying blind here. I know other models are sorta the same, or are the same, or are close enough to compare to, so I’m confident I’ll be able to wiggle it out.

First thing was disconnecting the stabilizer (sway bar?) from the front. 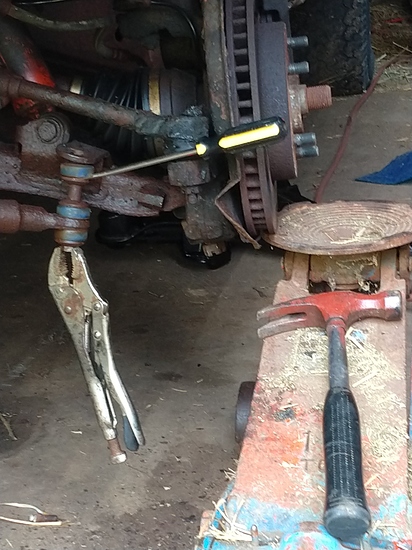 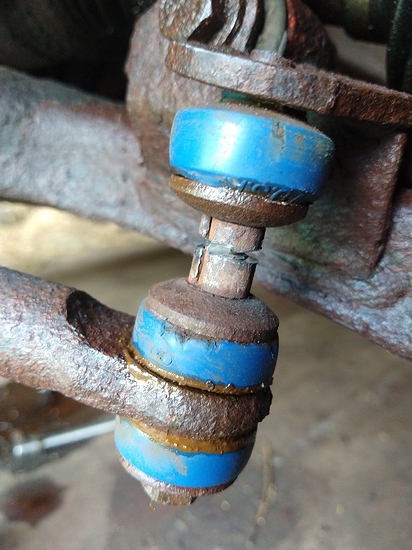 So I started cutting it with a big grinder and one of my asshole cats decided to use me to jump onto the truck. Then this happened. 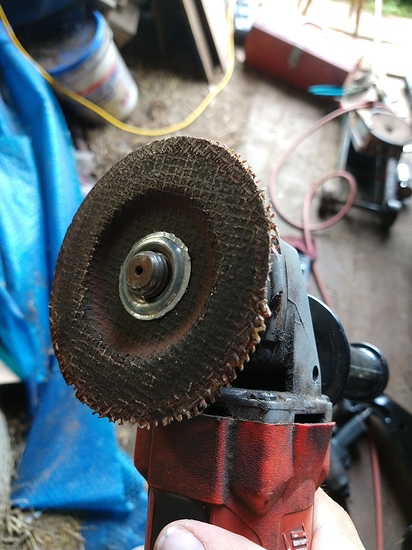 Tried to see if I could grind it back smooth, but decided to take it slow with an air grinder instead. 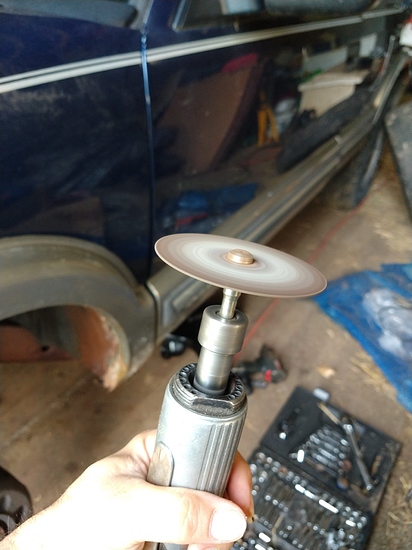 Took about a half hour more but whatever I got the thing off. 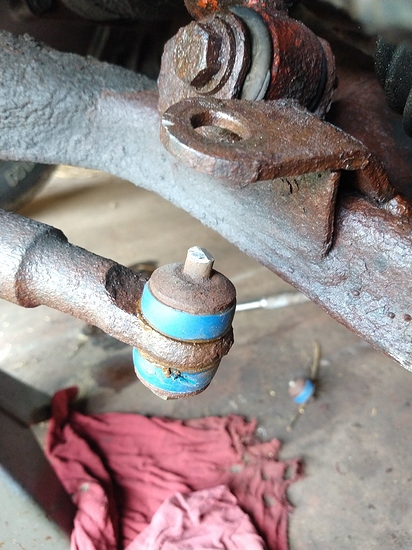 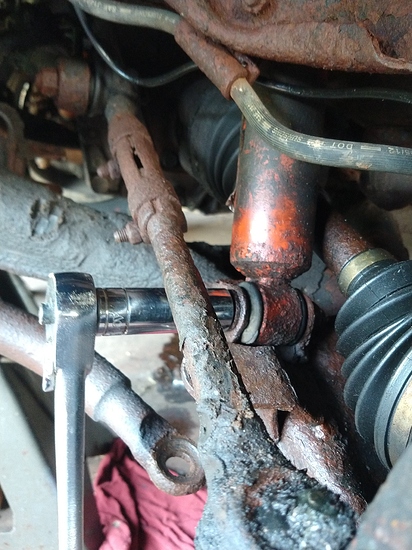 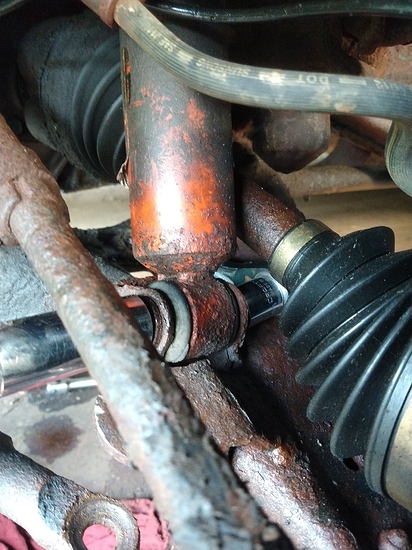 I didn’t have a wrench the right size on hand. 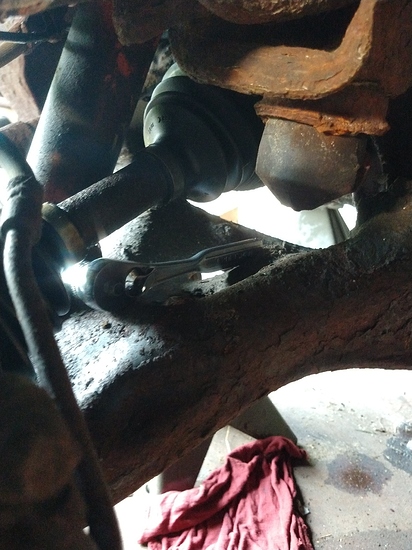 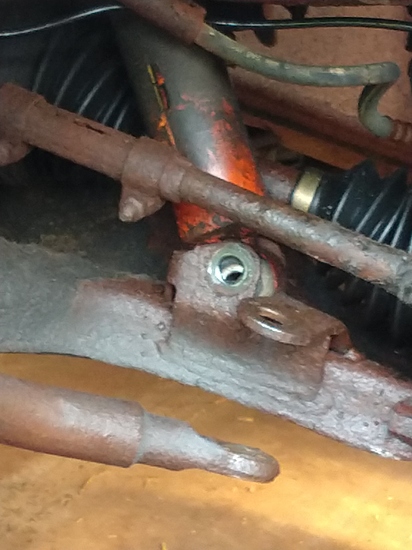 Next loosen up the tortion bar (always count your threads) 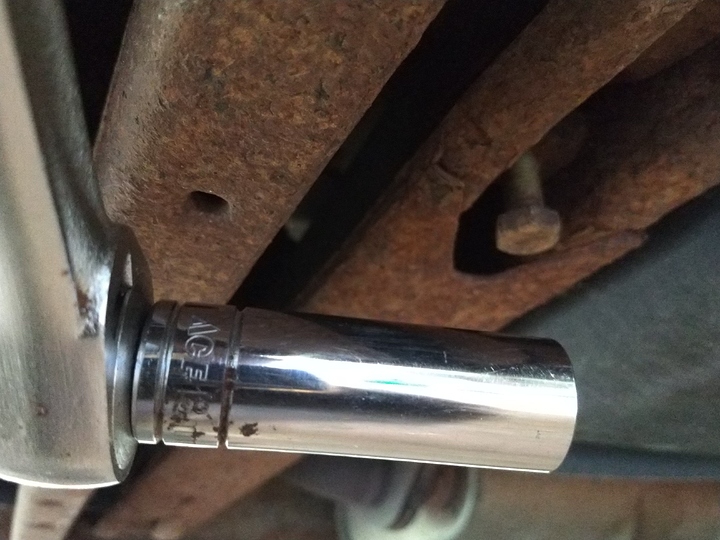 VS everything else, this is the bolt that took the most work. I don’t know why.

Then trying to get the bottom of the knuckle loose enough that I know I could MAYBE pop it off? 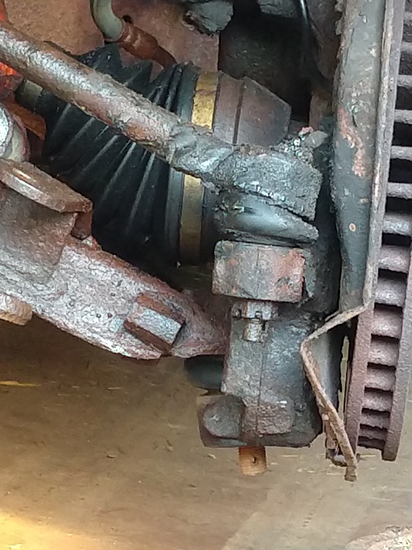 smacked it with a hammer a couple times after that cotter pit nut was loose, and I’ve hit it with Kroil a few times, nothing indicates its broken free yet though.

Last thing I did was the pivot bolts. Well, the rear one anyways. 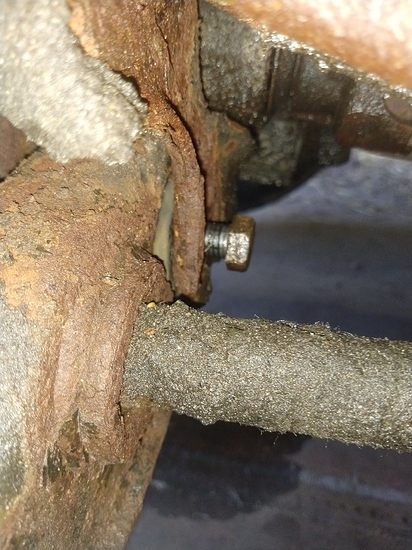 The front one was annoying because it was behind the stablizer bar up front. Had to wriggle a socket in there and basically just kept shaking shit around till it lined up. 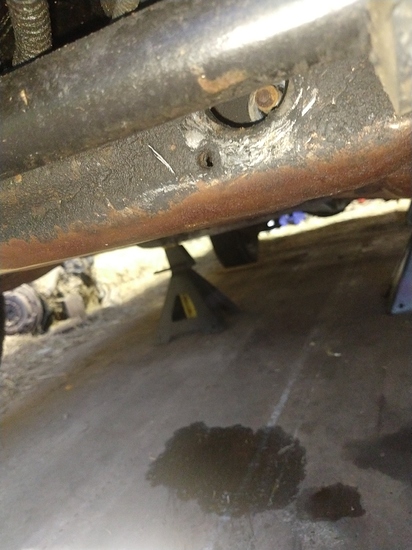 Yes I know theres an oil leak the oil pan gaskets need to be replaced.

So the over all goal here is to basically just have the thing fall out. According to things my dad has read, you really don’t need to rip the knuckle all apart, but just… loosen it. And thats the goal. However theres still stuff that I can’t quite see how it goes together, and our repair manuals don’t show bullshit.

SRSLY need to teach car people how to properly document shit. Its like teaching BSD people that the build directory could be stored on another drive.

If anyone could answer: do I need to pull the short axel out to do this all the way? Or should I take apart the hub and just deal with it? (I’d rather not)

The SA has some leeway in its placement and I can push it in quite a good deal and I think I might get the wiggle room I need, but I’ve still yet to work that front pivot bolt out yet. And its more than possible that with the weight of the A Arm itself the SA will just get shoved back anyways.

IDK yet I’ve been researching 4WD systems to make sure I can’t fuck anything up.

All I can say is ChrisFix and good luck!

I mean I almost have it out. Thank you though.

You just have to clean up your hard drive and everything will be OK.

So I have to take it all apart. Sigh. Oh well no biggie. 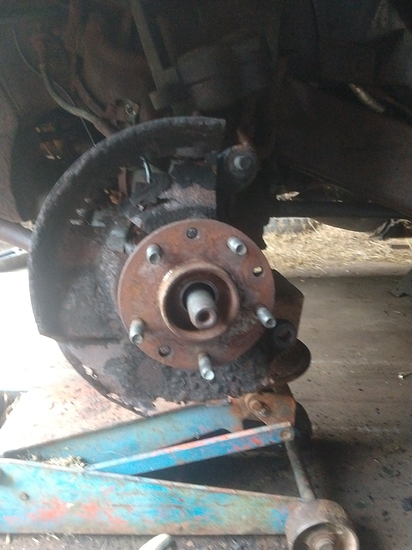 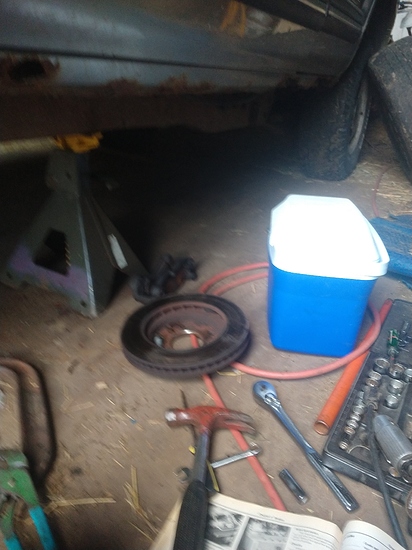 However the other end of the tie rod is stugk, my dad isn’t home, and idk where the air chisel is, nor pickle fork.

The most annoying thing is no matter what I do I cannot get the knuckle off, even though its completely loose and free. So I have to get the tie rod off to reach the bolts to undo the short axel to take preassure off of the ktuckle and pretty much everything will fall off after that.

Where in the fuck is my father.

SRSLY need to teach car people how to properly document shit. Its like teaching BSD people that the build directory could be stored on another drive.

Uhmm its cuz you own a chevy LOL… anyways man get under there and clean that all up… sand the rust off coat the undersides man you live in the north… you live where they salt roads… rubberized coatings out of spray cans can help a ton… clean things up get that oil pan replaced. Just cuz somethings old doesnt mean it cant be awesome

I’ve got some pointers for the "already done part… I hope this comes off constructively.

First thing’s first, if you don’t have Liquid Wrench or WD40, get a couple cans. You’ve got a fair amount of rust, so having a chemical anti-seize will help.

First thing was disconnecting the stabilizer (sway bar?) from the front.

Yep, sway bar. That bolt on the bottom have been able to come lose.

Sometimes you need to douse it with WD40 and wait 24 hours.

Then trying to get the bottom of the knuckle loose enough that I know I could MAYBE pop it off?

In the picture right below here, it seems like your tie bar is still attached. I’d have unbolted that.

However the other end of the tie rod is stugk, my dad isn’t home, and idk where the air chisel is, nor pickle fork.

Tie rod should typically come off right after sway bar.

rubberized coatings out of spray cans can help a ton

Please no. Unless prepped perfect and applied perfect (AKA by a professional) all you are doing with that stuff is creating spots for dirt and debris to work into and stay pressed against the metal.

Regular applications of fluid film or similar every three to six months is an okay stopgap until something better than a rattle can job can be done.

Please no. Unless prepped perfect and applied perfect (AKA by a professional) all you are doing with that stuff is creating spots for dirt and debris to work into and stay pressed against the metal.

Honestly he could get a tub after clean it very well… you can do it yourself Ive seen it done ive done it right… Ive stopped rust in its tracks and it hasnt chipped off. Yes a lot of people suck at doing it but if he does it right it will be just as good as a pro

Sometimes you need to douse it with WD40 and wait 24 hours.

Kroil is WAY better. I recommend it highly.

In the picture right below here, it seems like your tie bar is still attached. I’d have unbolted that.

The goal was to not have to take anything more apart than just the A Arm.

Tie rod should typically come off right after sway bar.

Its loose, just stuck on goop.

Oh I have him ignored I don’t even see it lol.

Turns out I may have broken a rubber bushing. Oops.

Eieher use a sacrificial nut threaded on enough to protect the threads and hit it with a hammer
or
Leave the nut on the tie rod but loosen it a little. Put a smaller socket over the tie rod bolt and flush against the nut and give the socket a bang.

Those tapered bolts can be a bitch to get out. It just needs to break loose, will fall out afterwards.

Yeah I know probably obvious but if you are replacing one bushing do the lot. May as well any what while you are there.

All the bushings were new. lol

I was taught to hit the side of one of those with a big hammer instead of trying to pull the pieces apart. The conical shape bends slightly under extreme force and the connection just pops apart (also why they have cotter pins). They often have a thicker flat spot specifically for hitting.

Also, I found they ways of the Lenox Metalmax diamond wheel for my angle grinder and it is amazing! ~$12 cuts like crazy and doesn’t break.