Anyone still play with a PSP?

I might be one of few that like console gaming, but I love my PSP. Back in the day its what I had because my PS2 blew up and when I got my PSP my world was flipped. After finding CFW, running linux, you can run any game on it, theres quake on it for fucks sake.... I have always loved these things.

Now, yeah, MIPS Dragon series 3000 CPU's are pretty limited, but looking at what I can do on my PSP I'm just happy that it can run Spyro or persona 3...

So does anyone still fiddle? The hack scene has been dead since around 2011 but even so, still some fans I bet?

I still own a pandora battery I made myself. Although I only play PSP games themselves on emulators now.

I still have a PSP GO laying around. Played persona 3, monster hunter, and dissidia. The hacking scene was amazing until the vita came out.

I bought PSP and installed some special software on it. Forgot what it's called, but it lets me run other emulators and cracked games too. I have Dante's Inferno, Final Fantasy ...eeee VII Crisis Core and Pokemon Fire-red. The emulator for pokemon is amazing. I could save the game at any moment even during battle. And when I run out of battery and forgot to save. I re-charged it turned it back on and the game would continues exactly where it stopped.

However I haven't touched it for more then 2 years now.

I still have a PSP, although I don't use it anymore. I had custom firmware on mine as well, it was a ton of fun. The worst part was how fragile those UMDs were, I think just about every one of them fell apart on me.

The GO was cool because it had a HUGE jump in CPU power. In the hack scene GO's are great to emulate Sega Saturn and Dreamcast but they don't do much else sadly...

You would think they would've figured out by now.

I don't play many games, but I like to have my PSP for some emulation, and some PSP games like Persona and Dragon 2020. I have custom firmware and a 32GB mSD card in there, so a lot of games.

Here is a picture! My camera is not so good 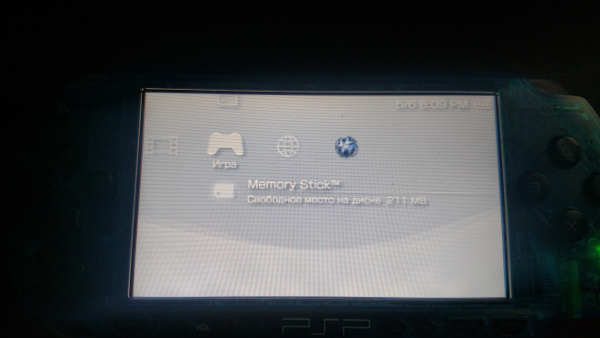 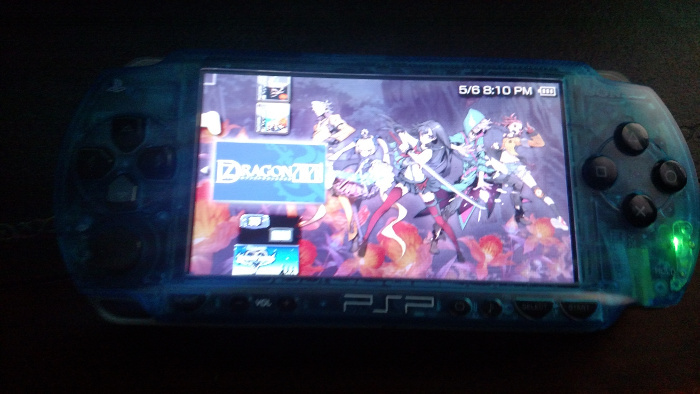 Although, there were adapter kits to turn a microsd card into the shape of the sony card. those were my heaven

If anyone in this thread is not aware, there is a FOSS program called PPSSPP that works really well to emulate PSP games, and can do so on relatively slow hardware as well, which is impressive because I would expect the ARM-x86 translation layer would have some pretty large overhead.

There are some very good PSP games that are really only available on that platform, so if you can't find the hardware it might be worth checking out.

Some great PSP exclusives that I can think of off the top of my head are:

Actually the stuff that made magic gate good they sold to SanDisk and SD cards have it now. When the system would allow for it, in the PSP's case I only know from emulating a PS1, the frequency of the bus the memory card is on changes from a base clock to a higher clock to help with load times.

On my PSP if I play spyro 2 in the built-in emulator it has options for "Disk Load Speed". If you set that to high instead of normal, the cardbus will stay overclocked to have it load instantly. Since the PSP only has like 64 MB of dram, 16 MB of operations ram, and 128 of VRAM, a lot of a game will be loaded into VRAM, like spyro, and distributed to where ever else. Operations ram is normally used for addressing where shit is and the PS button and the OS. I think theres a plash chip in line with it too where BSD is installed but I couldn't be certain. Then dram is what you would expect.

Nah, magic gate was cool. The whole PSP was amazing, but no one liked them that much.

This thread made me pull my PSP out of mothballs and start using it again. Still rocking the PSP-1001. I was amazed the battery not only took a charge, but is holding one after having been left uncharged for several years.

Oh yeah, pretty much did it all at one stage.

Started reading, made my own Pandora battery by severing a pin on the battery controller board. Flashed early lite CFW and then making it permenant later on. Went through a few different propels CFWs for a while.

Ended up with basically a media player thanks to the hold.prx to turn the processor down super low, just enough to play music and killed the screen when you clicked the power switch to hold.

Had a file system app to pack and unpack zip and so on and move files around so it was self contained in the end. Down load mods through the browser, move them with the file system app and installed them tomplay if they were games or updates.

Long singe lost the PSP. had replaced the face plate with rubberised yellow one and black buttons, and the battery is dead when I last saw it. Was an original 100 series so it doid nearly everything, the 2/3000s were the best, for having every connection option, but 1000s were tanks and I liked the feel of the chunkier ones, more comfortable.

I had a PSP and I used to be into it when that hack involvling the GTA Liberty City exploit was available which was back in '06. Mainly used it to emulate SNES, Reg Nintendo, Sega Gens. Then I grew tired of it and gave it to my little cousins back '11.
S/N: I'm way more into the Gameboy/NDS/3DS ecosystem and been collecting those since the 90's.

A bit of necrophilia... I mean necromancy, but if my psp hasn't been stolen by my previous roommate, I would have still be playing Patapon series on it.
On the other hand my pc and even my phone can deal with emulating psp pretty well, so may be not...

I loved my PSP (and still do) with all my black little heart. Played FF1 and FF7 on it, Burnout series, Patapon, Disidia, Crisis Core, all great games...

I was thinking of it converting into a portable SNES emulator by whacking a Micro SD Card into a Micro SD to Pro Duo adapter(Wish I knew about it 5+ years ago) and then I realized that my smartphone does it better now. Now its sitting inside of a junk box, dead and have to deal with Chinese batteries since its been a long time since i played on it. Mostly played Dissidia and 012 with a few guys at school at the time.

There are dual slot adapters. You can get 512gb of space in one of these things if you REALLY wanted to.