AMD Threadripper 3970X under heavy AVX2 load: Defective design? (No, but there is an issue)

I’m writing this thread as a kind of followup/answer to @DerAlbi’s post here (“3970X - Prime95 stability?”) and to my own thread over at Reddit (“Prime95 errors with AMD Threadripper 3970X build”). Sorry, I’m new here and I can’t use links in my post yet…

It appears that several (many?) 3970X parts —and possibly 3960X and 3990X parts too— are unable to perform correct AVX2 computations under heavy load (presumably heavy current, certainly not heavy temperature) when the data set fit in L2 cache. We need to start a conversation with actual engineers at AMD and/or GIGABYTE, and we need to get precise answers: Is there a systemic issue with the Threadripper 3000 CPU series? Or a high rate of defective products?**

Let’s ask the question: Is anyone able to run Prime95 with min and max FFT sizes set to 16K, in-place FFTs, 64 threads, with AVX2 on an AMD Threadripper 3970X? If so, what motherboard are you using? What settings (frequency and voltage)?

I ordered the 3970X a few days after it was announced back in November and I built my rig in January. Full current specs of the system below [1].

I immediately had a host of issues, including errors in Prime95 and even blue screens under Windows. I reported my experience over at Reddit [2]. Long story short: I determined by trial and error that one core seemed to be defective (!?). The system became stable again when I disabled core #32 in Windows, and I was then also able to pass Prime95. I ended up RMA’ing the CPU and, in order to avoid too long of a downtime, bought a second CPU while waiting for the first one to be reimbursed…

At the time I wrote in the Reddit thread (in a post titled “Update #5”) that with the new 3970X part, my system was fully stable and that I was able to pass Prime95…

I recently found out that’s not entirely true. The system is fully stable, but I still can’t pass Prime95. Here’s a quick summary of all the tests I’ve done so far:

I’m also using this system fairly heavily on a daily basis, and at times even punishingly so (I’m a rendering software engineer doing large C++ builds and heavy CPU, GPU or CPU+GPU renders) and as far as I can tell, it’s completely stable: I never had a blue screen or any kind of hard lockup, no weird errors in Event Viewer, no application crashes.

What’s interesting is that Prime95 passes when min and max FFTs sizes are set to 4K or 8K, but it fails instantly (in less than a second) when they’re set to 16K.

At this point my conclusion is the following:

At soon as 128 KB or more of L2 cache are accessed under heavy, all-core AVX2 load, one or several of the compute units of the 3970X (AVX2? AVX? probably not ALU) produce incorrect numerical results.

It’s not a thermal issue since it fails within a second. It seems likely to be a power delivery issue. Something Vdroop something something? This is where my hardware knowledge currently stops, sadly.

A note power consumption: My system draws around 195-240 W at idle (as measured by my PSU) with the CPU alone drawing about 70-80 W [3]. I’ve configured Windows’ power plan for maximum performance but I’ve set the minimum processor state to 70 % in an attempt to reduce power draw at idle. It’s possible that there are better settings for maximum performance under full load with best power economy at idle: I’m all ears!

Finally, a note on CPU temperatures: At idle the CPU hovers around 39-50 °C and tops around 72-78 °C under full load. I’m using the best air cooling setup I could think of and get my hands on, but it’s still air cooling, and my system is installed in a closed case (but with extreme attention to airflow). 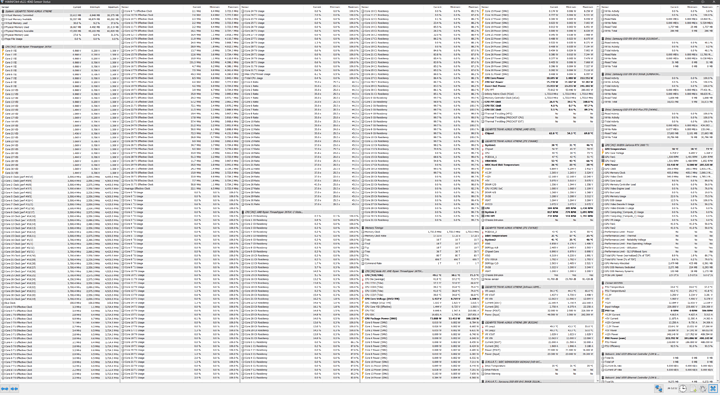 Which Prime 95 version are you using ?

Assuming you are stock clocks?

I know it’s not quite the same setup as you, but I’ve been finding that my 3950X is completely stable with Precision Boost Overdrive and 3600CL16 XMP, with the sole exception of Prime95 Small FFT. If I run P95 with any more than 24 threads, the machine instantly black-screen crashes. If I run with a larger FFT size, it’ll do the full 32 threads all day.

I’m on an Asus Crosshair VIII Hero board, but I too suspect some kind of power delivery problem, but I haven’t been able to narrow it down with any of the VRM settings.

I’ve had stability issues with a 3960X under similar conditions. Haven’t tried the AVX2 tests you did, but symptoms include USB devices stuttering or disconnecting, lower than expected performance, audio dropouts and on one particular benchmark an instant hard lock – the reset button didn’t work.

I also found a solution. It’s Vdroop, yep. Here’s some ideas that might help you:

Already tried playing around with XFR limit settings?
I doubt that this is a vrm issue.

I haven’t. What do you suggest I play with exactly?

i’m just reading trough a reddit topic, on which people seem to have similar issues,
then you are encountering.
It might actually be an issue with the cpu itself or just prime95.

Please post your findings in this thread at Mersenne Forums, where the author of Prime95, George, hangs out. Prime95 has had similar bugs in the past, and there’s a good chance you’ve found one.

Maybe @wendell could do a quick run to test if he might be able to re-produce,
this as well.
I mean if more people encountering this problem, then it might indeed be an issue,
with prime95 itself.

Please post your findings in [this thread] at Mersenne Forums, where the author of Prime95, George, hangs out. Prime95 has has had similar bugs in the past, and there’s a good chance you’ve found one.

Great idea, will do now!

Seemingly no issues on my 3970x + ASRock TRX40 Creator. This board does have “SRC Spread Spectrum” disabled by default claiming enabling it reduces stability. 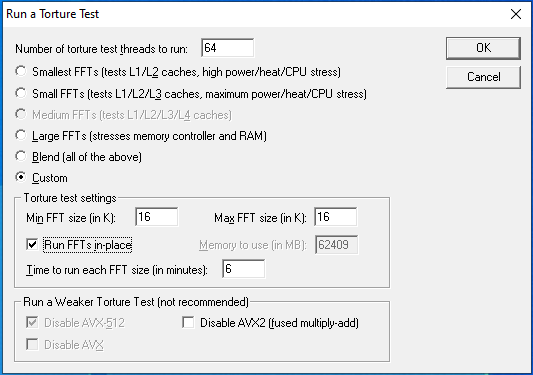 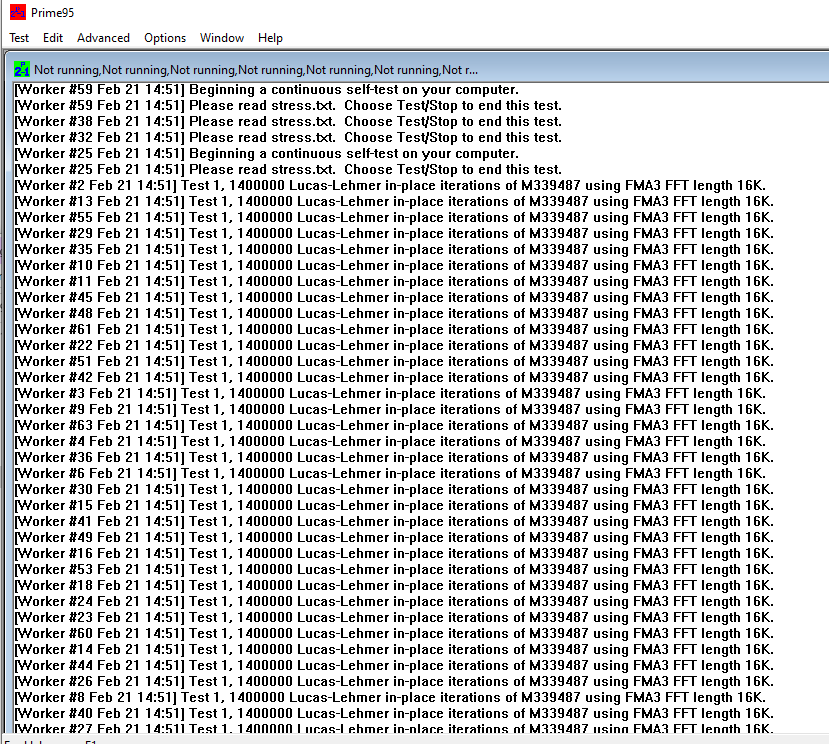 These are the correct settings indeed.

This board does have “SRC Spread Spectrum” disabled by default claiming enabling it reduces stability.

I think it’s also disabled by default on my motherboard but I’ll need to check next time I reboot.

Be aware that some spread spectrum settings can be hidden behind other options. For example, on the Asus motherboard I’m using, I couldn’t disable VRM spread spectrum without first disabling VRM power-saving – but disabling spread-spectrum is what stopped the instability.

Thanks for posting. Please have a look at my thread, i posted an update: the VRM is missing a switching cycle every 4ms actively discharging Vcore so a voltage dip occurs. Oscilloscope screenshot here:
https://forum.level1techs.com/uploads/default/original/4X/e/9/8/e98317514c2e8f565a8c6c76ce078779581b98bb.png
My comments on it in this post:

Hi, i have not read the post (in detail) yet, but this is getting very interesting. Last night (night for me) I had a session with Wendell who was kind enough to spend time with me probing his board, testing Prime95 and so on. He does not have issues. However i am willing to share another screenshot with you of my oscilloscope findings: [DS1Z_QuickPrint2] What you see is the voltage Vcore-dip on the bottomg. On top i probed 3 of the 16 phases. Only the waveform counts, the ways i probed to phases does not give me absolute values, just an indication of what waveform! THE VRM IS INDEED MISSING A CYCLE. And its worse: it is not only a missing cycle due to a protective feature. I can distiguish this, because the low-side mosfet of the stepdown is turned intentionally ON by the multiphase-controller causing the dip. All phases at once. The CPU does not have a chance. Now, i have had 2 boards with the exact same issue. I have to change the CPU first to really double check that it is not the CPU, but it makes absolutely no sense that the CPU would cause that issue. PMBus-Communication is far to slow to misconfigure the VRM for only one cylce. My current guess is that the XDPE132G5C has some sort of configuration issue (which can be fixed by bios update) or it is actually a hardware fault inside the chips - as if there is a bad badge or something from Infineon. PLEASE tell me that Franz is a German name? Where do you live? Send PM. In your post people suggest it is a Vdrop issue. Trust me, the boards copper layout is solid. Those boards do NOT generate excessive drop with huge variations (meaning the Load line calibration in bios stock settings should be fine). If someone hints at a drop, i honestly think it is the VRM fucking up. We need more oscilloscopes among the people. It is very unfortunate that Gigabyte is not taking me serious. I have no power to get through to someone where a technical discussion about intricate details about the VRM is actually fruitfu…

Well I think the fix can be done via BIOS update. I am running a 3960x with a Aorus Master. On the F4h bios I could run the test for about 10 minutes before failure. When I upgraded to the F5a BIOS, the test fails immediately with spread spectrum enabled or disabled.

I am running Prime on Linux (Siduction (debian sid)) v29.8. The F4h bios was missing the spread spectrum settings.

Well i can remember that Gigabyte actually had some,
bug with i believe the F4 bios on the master.
It caused the vrm to run a bit abnormaly warm,
even when it actually has a active cooling fan.
The weird thing is that the Extreme did not seem to have the said issue.
Even though the vrm’s are physically the same.
I believe Gigabyte fixed the problem with the F5 bios on the master.
But did not really state what the actual issue might have been.

But still i kinda doubt that vrm is cullprit when it comes to avx2 heavy load failure.
I kinda wonder if this issue might not be related to the cpu,
actually hitting its powerlimit.

Sorry you are having issues…can you reach out to me @ [email protected] and we can get you connected with some folks over here to help.

Hey everyone, we (mods) are in the process of confirming @dprairie_AMD’s identity. We advise holding off on reaching out to him in the meantime.

Assuming you’re legit, welcome @dprairie_AMD. We’re happy to have an AMD rep among us.