The fans inside the orange carriers are also dogshit. I swapped them for the same Noctua Industrial 3000rpm 120mm as on the heat sink.

How is the noise level now compared to when you had orange dogshit fans? I see that those INdustrial 3000 are a bit on the expensive side

The Noctua Industrial fans ARE noisier than their consumers fans. But certainly much quieter than the typical 8000 rpm screamer server fan.

The Noctua fans are bullet proof. I have some that have been running non-stop for 10-15 years now. As long as you can get past the “could care less what you think of the brown-tan color” scheme and just concentrate on the performance, noise characteristic and the longevity, they are a good choice for fans.

Plus the IPPC fans often come in a black frame with only the mounting corner dampers being a dark brown. So a lot less objectionable if you care about looks.

The Noctua fans are bullet proof. I have some that have been running non-stop for 10-15 years now. As long as you can get past the “could care less what you think of the brown-tan color” scheme and just concentrate on the performance, noise characteristic and the longevity, they are a good choice for fans.

Noise depends entirely on which RPM you run them at, as with all fans.

As I’ve mentioned before, the Noctua fans are the best out there in terms of airflow & static pressure/noise.

I run the 3000rpm IPPC versions as my machines are often operated in hot environments, sometimes requiring extra RPM to keep the 1KW of heat output in check. I use the BMC to manage fan speed curves.

Noise depends entirely on which RPM you run them at, as with all fans.

Often overlooked but basic knowledge. Many “silent” fans out there are just silent because they are capped at 1200rpm. Noise per rpm bracket and static pressure are the only metrics that count for me. I don’t mind 3000rpm fans or radial blowers if they are good and not located in my living room. You just know if you’re dealing with proper engineering.

Any idea how many amps I can draw from an (each) individual fan header?

Sorry for being late to the party, work has been crazy lately. Just wanted to contribute that the kind of header (the connector, not what feeds it) mounted on the board is rated for 3A continuous, per pin, with 5A peak. HOWEVER this vastly depends on the quality of the female contacts in the connector you plug onto them.

On a semi-related news, my ROMED8-2T is still rock solid and I’m still very happy with it.

Yes I understand this. My question was if you can compare the stock orange fans with those as far as noise if they both run at max speed. Just to know what I am getting into because this is allready on the limits for me as this is a workstation that is 3 m from me

The fans inside those orange carriers are sat in a box full of other junk, never to be turned on.

Don’t waste your time with them.

Like I said, you can create your own fan speed curves via the onboard BMC, and make the Noctua fans as quiet/loud as you want.

Anyone already updated and what method did you use?

Bit late to the party but I’ve recently acquired a ROMED8-2T with a 7551. And as some in this topic I’ve encountered some issues with fan control. I’ve seen a post of @Nefastor with BMC version 1.11 in May 2021. Would you be willing to provide me with a link to that firmware?

The link is (understandably) dead. I’ve tried the other firmware from Asrock’s website but 1.10 is the highest I can flash it to. I think because it’s a Napels CPU?
Also, regarding tweaking the fans in the orange cases. Check out this blog from cavelab / Thomas. He’s worked out how they are connected. I’ve used his guide to get the fans to quiet down. But the idea should work in more Inter-Tech cases. 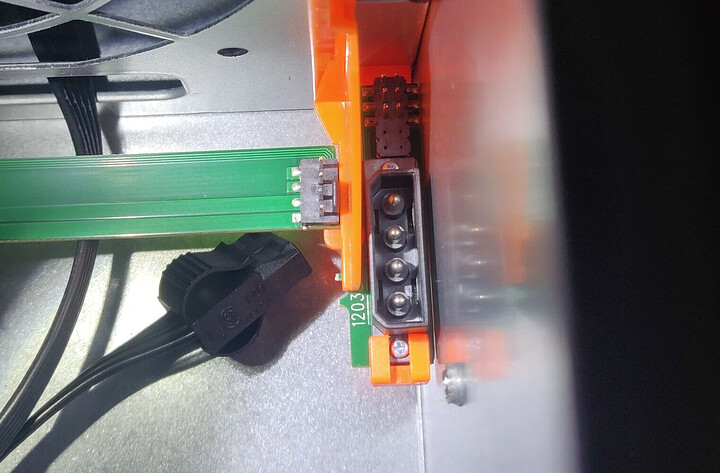 I get emails from readers every now and then — but no topic has caused more interest than the 6-pin fan header on my two Inter-Tech server cases, 4U-4416 and 4U-4129-N. Perhaps for good reason, it allows for the internal 120 mm fans to be PWM...

PS. Made an account just to ask this. Wendell finally convinced me after a year of catching up on the L1 channel.