I'm getting ready for my new system build. Due to being low on funds, I am building a low end system. I have an AMD A4 4000 which I am paring up with the Gigabyte F2A88XM-DS2 mobo. Question I have is, can the A4 4000 be used in conjunction with an Nvidia card?
Cheers!

Simple answer yes. But bro why don't you get Intel g3258 or fx6300. And do you have a microcenter near by? The cpus are always cheaper over there and I'd you bundle it with a mobo they give you 40 bucks off.

It should work. The a4 4000 might potentially be a bit of a bottleneck.

And do you have a microcenter near by?

Hello ChunkyMilk.
I live in England. However, I use OCUK which is a fantastic site! :O) This is a low end build that I 'might' upgrade down the road?!? I'll be using it for a Linux system. I have plans on building a [shall we say] powerful system based on the g3258 or fx6300 later in the year that I'll be using for gaming and video editing. :O)

It should work. The a4 4000 might potentially be a bit of a bottleneck.

Cheers bigfil. :O)
I thought about the bottleneck, but maybe, just maybe IF I decide to add the Nvida, I'll upgrade the APU as well.

Yeah I think the g3258 or the fx6300 would be good ones to go for in the future like you said eariler. Scan.co.uk is a pretty good website as well, they tend to have some good deals sometimes. Getting the 750ti and upgrading the cpu/mobo later down the line seems like a good way to go. Good luck mate :O)

@desmondbirch, If you are planning to use a separate GPU you don't have to use an APU. You could just use an FM2 Athlon, that might mean you can get something with a little more power for similar cost.

Oh, and yes, dual core Athlons definitely are a bottleneck for gaming, but they are better than nothing and the majority of games will be playable, you just won't be maxing out the settings or running multiple screens; I benched an Athlon X2 I had to use to patch my FM2+ mobo so I could use my X4 860k. (I still have it if you want an X2 340X cheap, PM me, I am in the UK). 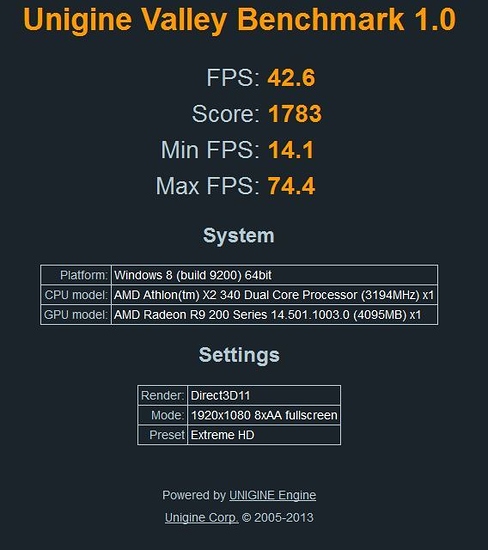 Many thanks for the info.
I have the APU and mobo already. Being a low end system (for Linux) I'll just get it up and running and take it from there. In the future I'll be going for a more powerful system.
Cheers.

No probs mate! :O) One thing I tend to do is impulse buy and then (often several months later) try to work out the best system to build. LOL! I first bought the F2A88XM-DS2 without thinking about what CPU I wanted to use it with[?] Heck! I even find myself looking at hardware for my future build before I have got all the parts for this one!!! :O) I just wish money grew on trees?!!! :O)

I live in England. However, I use OCUK

Had a look on SCAN? It's where I get my components.

Usually, with an APU, it would be better to get an amd card because of the APUs' dual graphics capabilities. However, I would never suggest a Dual core APU for this (or ANY dual core for that matter) because of low prefromance. If you want to get the 750Ti, get the Athlon X4 when you upgrade the processor. If you upgrade the APU, get an amd card, preferably a R7 260x for their great P:P.

Had a look on SCAN? It's where I get my components.

I've looked at SCAN, yes but have not bought anything from them. I trust they are good? I've been using Over Clockers (OCUK) for 8 years.

I bought all my components for my build last year from them. Great delivery, on time, and good packaging.

I bought all my components for my build last year from them. Great delivery, on time, and good packaging.

To answer your specific question yes an AMD CPU(or even APU) can be used with Nvidia components not a problem.

But if you are on a budget I would possibly suggest getting an AMD GPU because of the crossfire capabilities with APU. The only reason I suggest this is bang for buck and it will help with system performance. For more info check out AMD's page on this (link is right here).

Cheers GameOfDrones for the info! :O)

not a problem :) enjoy the build mate