AMD 390X unboxing what the hell

he repacked his xfx and printed new box.

@anon5205053 it's actually real. it got taken down immediately as soon as it got put up. people are now starting to repost the video all over YouTube. apparently this guy just picked this card up at a Best buy lol which is surprising considering all the Best buys I've gone to only carry Nvidia and low-end AMD cards.

lets wait for his benchmarks,hope he posts it

that guy probably doesn't pay attention to tech that often. he did say where are the Crossfire Fingers. which hasn't been around for about a year and a half on these cards.

yeah since 200 series went out.

Really doesnt mean anything. If it was one of the Fury's, it would of meant more. We already have a understanding of how the 390x is going to perform. 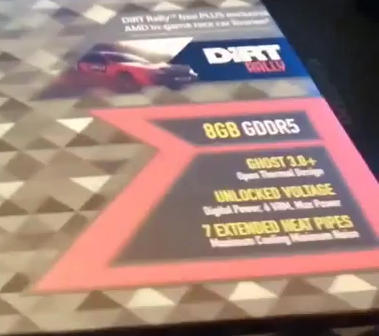 my question why didn't he show specs sheet or side... I have doubts that its the re-brand of 290x with 8GB, but stated 4096bits

Something doesn't add up about this, since if it was Fiji XT, he would be limited to 4gb's of memory. If its a re-brand, a 4096 bit memory bus wouldn't be a thing.

here is 1 more on ebay