AM4 MOBO's a Sh*tshow

Looking at doing a AM4 build and there are alot of Mobo Complaints in the reviews. Ive been Gigabyte the whole way and ya even they have an iffy record.

Whats up with that?

Hard to please everyone, and typically you only hear from a tiny few with problems vs thousands with no issues.

Personally I’ve done two Ryzen build, both B450 itx, and I’ve got no problem. I just regret having gone with the Gigabyte mobo for my mom’s build has the bios is kinda shit and the one fan header that was missing made me bought a fan splitter.

Well not sure what this topic´s real goal is?

But not every issue that people complaining about,
can be blamed to the product.
Because allot of the complaints people are ranting about,
are often issues that are caused by human error.
Or lack of proper knowledge.
Sure electronics can fail, and firmware has bugs.
That will generally be ironed out over time.
But still there are plenty of great boards out there.

Pretty much every brand has great and crap boards.
It’s just a matter of knowing what to look out for.
And what you use case scenario is.
A bit of research asking questions around, can help allot.

Stating that am4 mobo´s are a shit show, is just rubbish.
People should just do proper research first.
Same counts for certain tech tubers as well.

Don´t cheap out on a motherboard is my advice.

Because it´s the most important part of the system afterall.

Don´t cheap out on a motherboard is my advice.

agreed
Find out what features you want. After your 2nd motherboard you kinda know what you need

Look around all the techtubers, some catch things others don’t. IE: Paul’s hardware, bitwitt, tech deals for features; Gamers Nexus and Buildzoid for power delivery with deeper dives in the hardwared; L1 for virtualization and general features.

Although it is also true that MSI effed up their budget X570 offerings, so that might weigh down X570 boards’ “standing”.

Or those who complain that their 3900X,
system is causing allot of issues.
Because they put that on one of the cheapest pieces of trash,
boards out there.

Such kind of things…

X570 isn’t worth it. The only reason to get it is for PCI 4.0 and not needing to flash a bios. The active cooling is a huge turn off as it adds an extra point of failure.

I recommend B450 to everyone, and only suggest x570 to people who actually need pci 4.0. AMD annouced B550 coming soon, so I will be recommending b550 soon (assuming there’s good boards)

I wouldn’t go so far. X570 supporting PCIe 4.0 will soon come to fruition when the good 4.0 ssds and Nvidia’s Turing successors hit the market. I recommend B450 to people who don’t plan to upgrade their major components very much., ie. gpu and cpu.

X570 isn’t worth it. The only reason to get it is for PCI 4.0 and not needing to flash a bios. The active cooling is a huge turn off as it adds an extra point of failure.

Well this is a statement i read allot.
And that is something i totally disagree with it.

Because when it comes to B450 boards in general.
The choice of the boards to pair with Ryzen 3000 series cpu´s,
are pretty limited.
Because only certain msi models support bios flash back.
So that is one negative point.

Another issue is that non of the B-series chipset boards really,
have a decent vrm implementation.
There is of course a reason why those boards are generally cheap.
Still most B450 boards will be fine for Ryzen 5 cpu´s.

But i also see people recommending 3900X / 3950X cpu´s,
with a B450 board.
Which is just a very stupid thing to do.
Because the vrm’s of those cheap boards are simply not,
up for the job.

But the only matx board on newegg is out of stock

This list of boards are boards that i would generally avoid,
Because the vrm on those are just not great really.
Those boards will be fine for something like a Ryzen 5 3600X or Ryzen 7 3700X.

But that’s about it.

In general they just kinda suck.

But the only matx board on newegg is out of stock

Well matx and AMD Ryzen is not really a thing unfortunatelly.
I mean there are some m-atx boards out there.
But non of them are really great.

I would say if desk space is an issue for you.
Then itx will give you a better more decent board options.
M-atx unfortunately does not really get allot of love on the amd side of things.
On intel there is a bit more choice.

So if it really has to be m-atx.
Then intel is your best bet.

Because when it comes to B450 boards in general.
The choice of the boards to pair with Ryzen 3000 series cpu´s,
are pretty limited.

I think that now pretty much the majority of B450 for sale has bios compatible with Ryzen 3000 right out of the box. Was the case with both that I bought.

Well yeah still a gamble.
You don´t really know how long the board,
they send you has been sit on their shelfs.

You can ask for the shop to pre flash the bios.
Most shops offer that as a service which they,
ask a fee for.
But of course you could also be lucky as well. 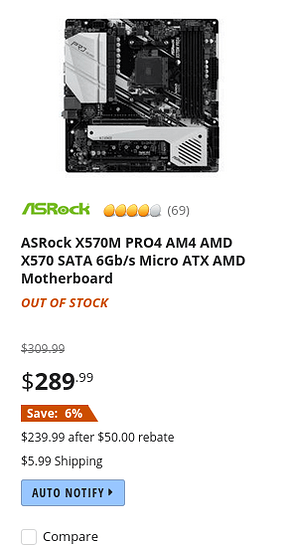 PCIe 4.0 will soon come to fruition when

I will concede there, good 4.0 ssds are coming soon. The launch of X570 and pci 4.0 ssds really soured my perception of gen 4

maybe, it’s going to take a good time, amd’s gpu division isn’t kind of a mess right now. The 5600 and 5700 is good, but plagued with bad drivers

I recommend B450 to people who don’t plan to upgrade their major components very much., ie. gpu and cpu.

Up until the leaks of the new amd/nvidia gpus. The logic for me is that by the time we see good implementation of pci 4.0 (and will take advantage of the full bandwidth, it would be worth a full system upgrade. If someone needed a system today just to game and do light content creation, I would suggest from the 400 series boards.

You might be right and I will need to eat my words if Nvidia and AMD make good pci 4.0 GPUs this generation. AMD’s handling of 5500, drivers, and lack of stream encoders innovation has really disappointed me it really feels bad to suggest nvidia when anyone tells me they want to stream at a good resolution and bitrate. AMD is making some big bets that cpu encoding of livestreams is the future so the gpu encoders are no where near the level of nvidia’s. I think I am a bit disillusioned with the lack of competition in the gpu space.

Still most B450 boards will be fine for Ryzen 5 cpu´s.

yeah those people are bonkers

But for Ryzen 7 i would recommend a decent X570 board.

if we are talking about someone running stock, a good B450 board with a ryzen 7 can work.