Totally new to the forum and this is my first post, I hope I get it right.

I’m am a budding game and game engine designer. I of course follow Level1Tech on YouTube and finally made the move to join the forums here after Wendell’s call for ‘Linux’ game dev’s. So here I am. By way of introduction I thought I would post what I do and what game software I create.

I have been working on a game engine for Monkey2 (programming language) for the last several years called Alien Phoenix. It offers lots unique features like an omnipresent window based GUI designed to work on any device or web browser, 2D mapping system, physics, collision system, 2D and 3D support including lighting and more and is mega-super-efficient. Alien Phoenix is in development but will be soon available in an early alpha state. The best way to see what Alien Phoenix can do is to checkout my work on my game Phoenix USC here or on the Phoenix USC YouTube channel. I also have an Emscripten based (runs in web browser) demo for Alien Phoenix featuring it’s window based GUI.

Phoenix USC is a MMO action game inspired by SubSpace and Continuum. I will be releasing an early pre-alpha demo very soon. It, like Alien Phoenix are all developed on Linux and will be supporting Linux natively.

I’d also like to share with other developers Monkey2. I have been working with Mark Sibly (designer of Blitz3D, BlitzMAX and Monkey programming languages) designing and building a very capable, friendly and awesome ‘Open Source’ programming language available to Linux, Mac and Windows users. The community there and I have put together a wonderful programming language that is worth a look.

I look forward to meeting everyone here on the forum.

Totally new to the forum and this is my first post, I hope I get it right.

Welcome.
Um… The lounge is to the left, don’t mind the weebs. They ate all the waffle…

I look forward to meeting everyone here on the forum.

Now on topic…
What made you try and develop an entire game engine? I mean there kinda are a lot of them. What is the thing, that makes you different than let’s say for argument’s sake, uh, I don’t know, maybe, Game Maker? They have pretty much all the features you said.

What made you try and develop an entire game engine?

Well. . .
Firstly Monkey2 is a relatively new programming language. The Monkey2 API has everything you need to design a game but lacks a focused game engine. So I took on the task of writing one in native Monkey2 code which goes a long way to promote the language and gives coders a familiar bed of code to work from.

Secondly, Phoenix USC (my game) is an MMO and the server end of things needs to manage literally thousands of collision objects every frame. Monkey2 until just recently was non-threading (threading just added but very new) so an application needed to operate on a single CPU core . Nothing I looked at as far as third party libraries was upto the task as it relates to efficiency. In addition I wanted a mapping system that could hold the entire world map in memory, manage hundreds of thousands map objects and their collision and do so on a single CPU core with plenty of headroom to spare.

Last, I have some unique features that make it my own. For one I have never seen a ‘window based’ GUI running in a web browser or on an Android tablet. Alien Phoenix does both. I would suggest checking out my little 2D / 3D demo for Alien Phoenix. It has both a 2D lighted example and a 3D one as well running in two fully functioning windows (movable, resizeable and so on). It runs in a web browser and is I think pretty cool.

There is a lot to what I have done with Alien Phoenix and it’s arrival is welcome in the Monkey2 community.

This project is really neat.

I have started to rework my website. I’m currently using my Alien Phoenix gaming framework to develop my website. Experimental, but perhaps the only website based on local GUI windows. Also has a starfield effect. 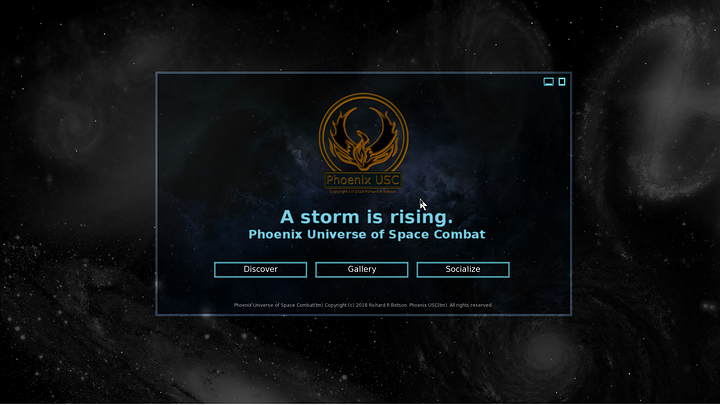 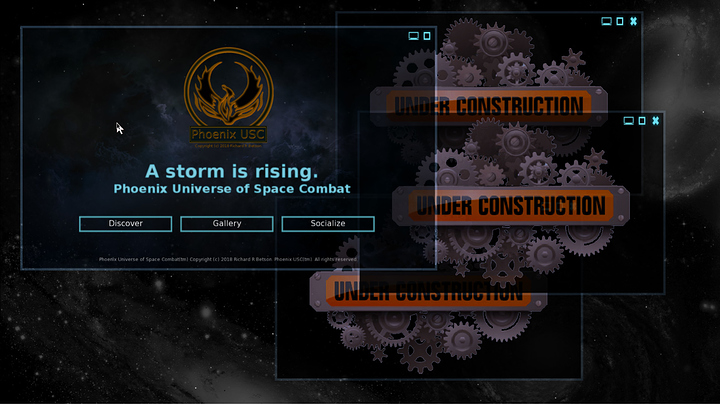 I have updated the site and added a resolution selection window. Now you can go from 720p to 4K resolutions. All every experimental. The image is the site at 3K on Chromium (Linux Mint).
http://www.phoenixusc.com

*** Important *** Do a shift+reload button on your browser if you have previously visited the site. Especially if it gives an error. It should work fine after that.

All of this really serves two fold. Developing my website using my game engine helps to work out the kinks for the Phoenix USC pre-alpha demo. It will also be web based for the pre-alpha and then compiled for OS’s and kernels natively in later releases.

I removed the header bar and added a settings icon to the main window (brings up resolution selection). Added a title bar to settings.

*** Important *** Do a shift+reload button on your browser if you have previously visited the site. Especially if it gives an error. It should work fine after that. 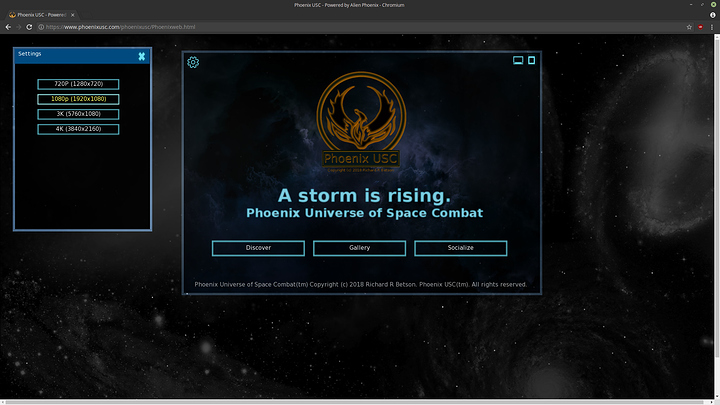 What do the two button in the top right do, both just seem to enter the same full screen mode?

What do the two button in the top right do, both just seem to enter the same full screen mode?

The one that looks like a monitor (the one furthest to the left) will cast a window as the background screen. All other windows will be above it but you can still interact with the cast window. It’s an easy way to manage windows for the user. Try clicking on the ‘discover’ button in the main window and then click screen cast (looks like a monitor button) in the main window (the one with the logo). Once you do the main window will become the background screen and all other windows will be above it. Try it out.

The other button (furthest right) just maximize a window. All windows are movable and resizeable, just FYI.

Oh okay that pretty cool. Thanks.

The other button (furthest right) just maximize a window. All windows are movable and resizeable, just FYI.

I was having a bit of fun with that all right.

Wow. #2 image on #IndieDB. Just posted it (above)… fast. I’ve never seen one of my images on the image ‘top 4’ headline.

Lightened up the space background which gives better depth.

Things are getting interesting… Checkout my website with scale-to-fit Emscripten + #Monkey2 canvas. Try changing the resolutions for fun.>
http://www.phoenixusc.com/

Be sure to do a shift+reload button if you’ve visited before. After that it shouldn’t be a problem when I update.

The Phoenix USC website use the Alien Phoenix game engine that powers my game project Phoenix USC. Much of the work here translates to the demo directly. 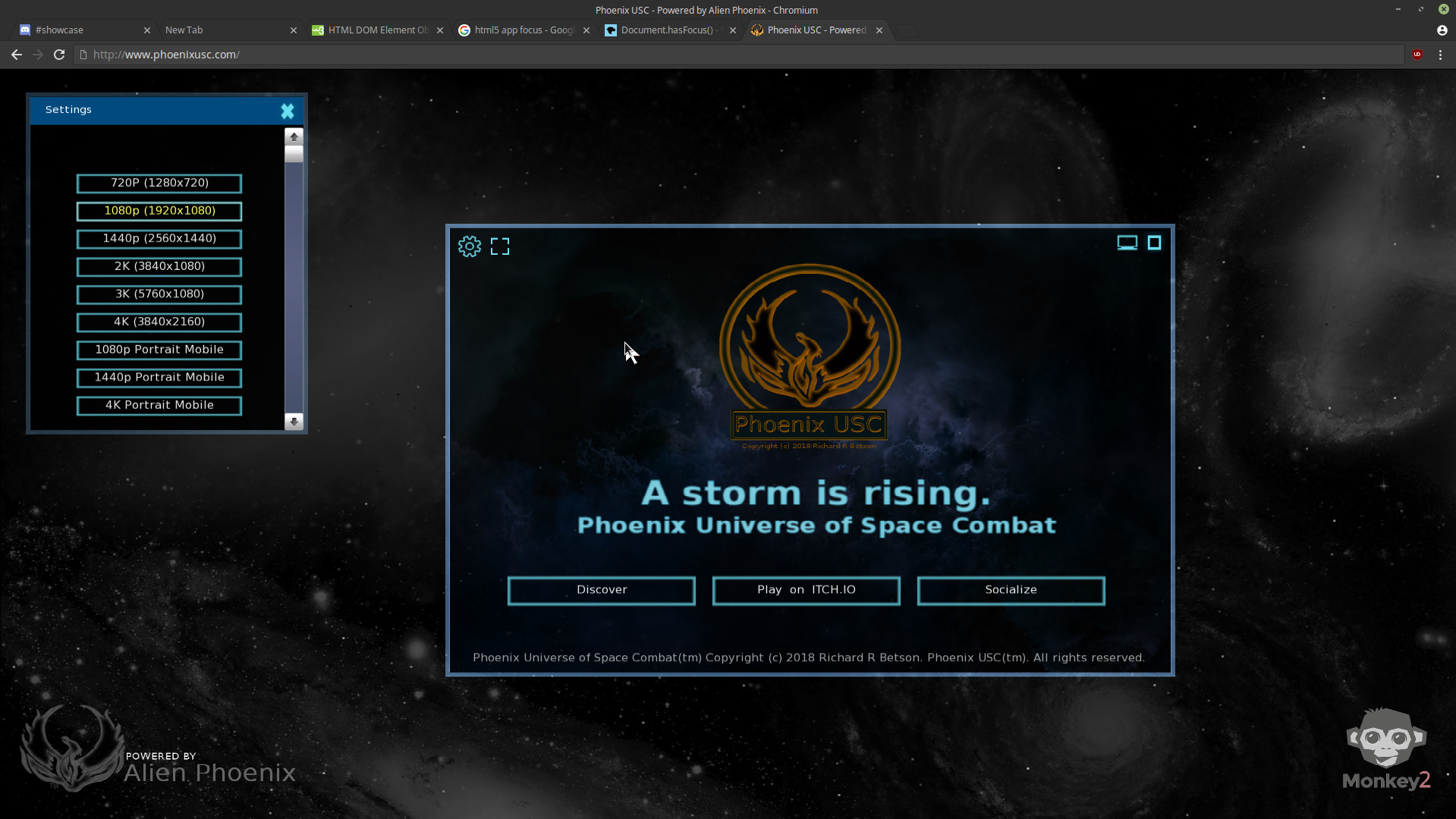 Oh! If you have a 1080p monitor, try the 4K resolution. The auto scaling will be great for larger monitors (and of course 4K monitors) and with the plus of a larger game field of view.

Phoenix USC is nearing it’s first ‘hello world’ pre-alpha demo. Some of the new bot ships in the demo.

All dev’ed on Linux Mint. 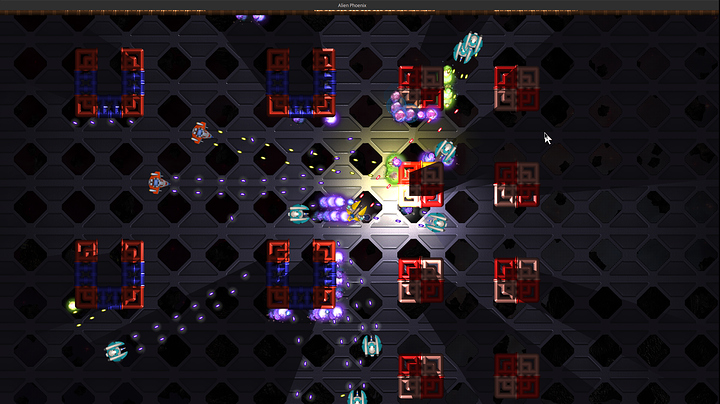 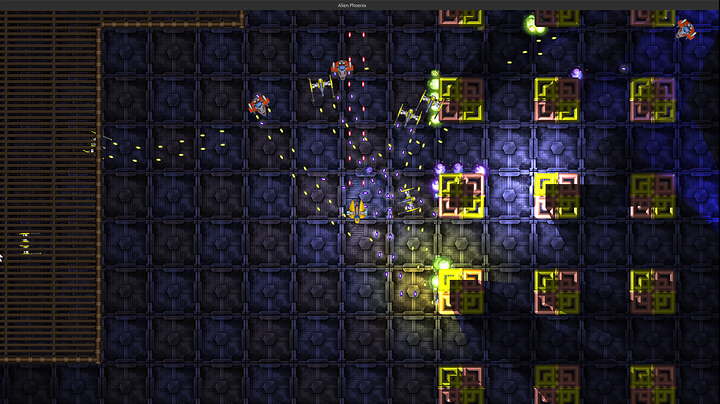 I have a test HTML / webassembly game front-end going on ITCH.io. It’s sort of a place holder and allows me to test things. Check it out.
https://vidiot-x.itch.io/phoenix-universe-of-space-combat

Putting finishing touches on the pre-alpha demo. This will all run 60 FPS, 1080p in your web browser,

Shout out to @SapphireEd. You’re not the only guy over 50 still rocking on. 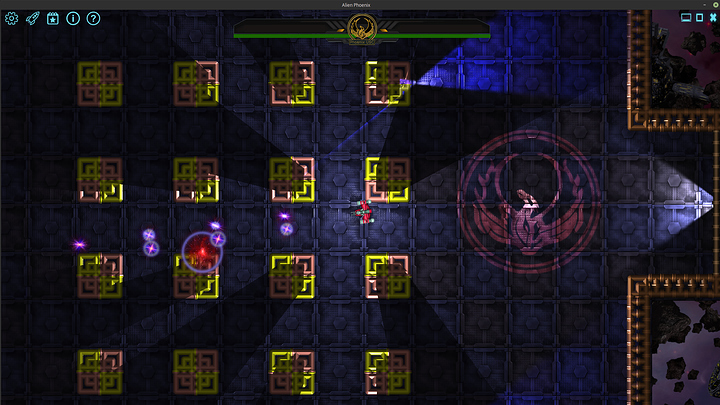 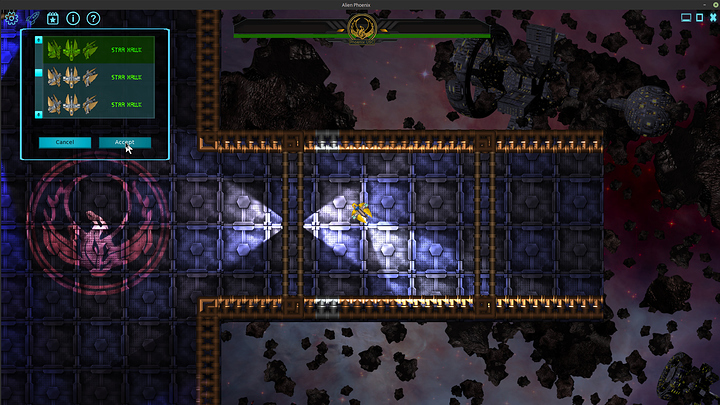 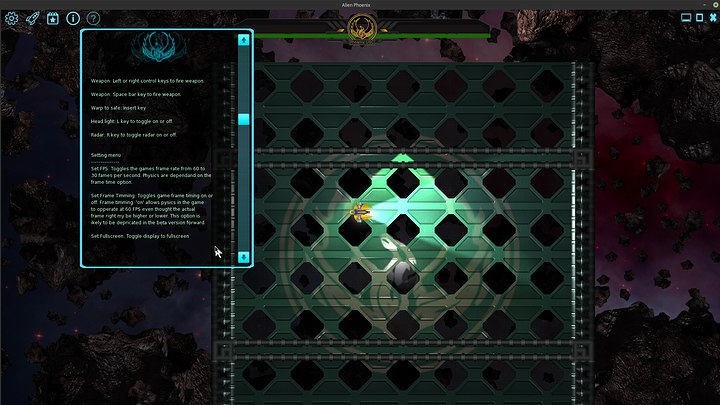 So very close to pre-alpha release. Shown here in a fully functional internal window (resize, move, maximize and more). The decision to build my own gaming framework with it’s own custom window based GUI is really paying off. 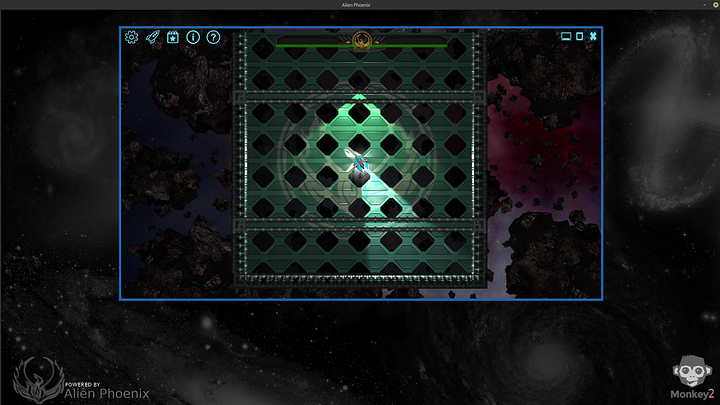