Advice for an EPYC workstation build for a DAW

Hi all, new PC builder coming from Mac here. Ex-computer-retail guy (ages ago) and not unfamiliar with building regular PCs, but need some advice for a higher-end Windows workstation build that approximates the new Mac Pro.

Please note, I’m NOT looking for advice or recommendations to use Ryzen / TR. There are architectural limitations to that platform, and a lack of mobo hardware that meets my needs. I need all the bandwidth and all the memory and more slots than usual.

My use case is to run a DAW for audio editing / mastering, and also for MIDI composition, with the desire to run very large orchestral sample libraries like the Vienna Symphonic Library (VSL).

When I say they’re large, let’s say that the brass section alone takes up 36GB, and instruments that include alternate articulations (i.e. variations on how it’s played, many different volume responses, etc) can be bigger. So having lots of throughput in terms of PCIe lanes and memory channels is important here.

The other limitation is PCIe expansion. In addition to a video card, USB 3.2 cards and M.2 SSD carrier cards, I’d like to have at least 1-2 slots free for Universal Audio UAD-2 DSP cards for audio effect processing, presuming they are compatible with EPYC / the Gigabyte motherboard.

I will be building this in a Dune Pro case.

What I’d like to know, from people with EPYC experience:

From people with DAW experience:

thanks in advance everyone!!

May I ask, where are you buying your MZ32 from?

For that particular motherboard (Gigabyte MZ32-AR0) it’s a little unclear how to hook up the case fans? The documentation isn’t really helpful in terms of what goes where - aside from the CPU fan header.

I’d look at an add-in fan controller, let the mobo manage the cpu fan, and an external controller manage the rest.

This jumps out at me as a “yellow flag”. EPYC has eight ram channels. It would be a shame to populate all slots with only 8gb DIMMS (8x8=64). Can you scrape a bit more budget for an 8x16 kit, or are you going to take a hit on bandwidth and only populate four slots to start? 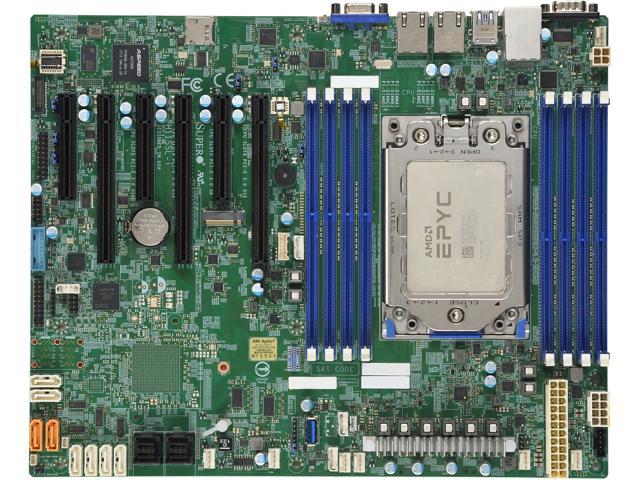 Hi! Was going to purchase from CDW Canada and likely get the rest from Newegg or Amazon.

Actually, to edit my post, it’s not the fan control headers I couldn’t figure out, it was the case front panel headers. The Dune case has a single power button at top (presumably connects here, but not sure what pins I need to use?) and two USB 3.2 ports which connect with a separate cable, which I was going to connect to the Silverstone internal header card. (Would be nice if the board had USB 3.1 Gen 2 onboard, or if there were cards with 4x external ports + an internal header so I can save a slot)

But that said, i’m still not exactly sure how to set the fan controls in the BIOS, or if I even need to change anything here from the system defaults? The manual mentions a “Fan control table” subscreen (page 90 in the manual) but doesn’t show it or explain what to do there.

Given the number of BIOS options I’m wondering what I’d probably need to edit there, or if I can pretty much leave it as is? Presuming it’s set to UEFI… (Yes, sorry, I really am new to this).

Yes, in retrospect that’s not a lot of RAM. I think I’ll aim for at least 128GB to start and progressively upgrade it.

No worries. Thanks, yeah, that would be my alternate selection. The Gigabyte board has both PCIe 4.0 plus two M.2 slots on the board vs. just one on the Supermicro, plus it seems to have more BIOS options you can directly access, vs. over the management controller.

Do you think Threadripper can satisfy your needs?

No. As noted in the original post, I’m not looking for TR-related advice.

Threadripper / Ryzen has half the memory bandwidth / PCIe lanes compared to EPYC. There are no Ryzen / TR boards with the number of PCIe slots I need. It also doesn’t support the amount of memory I need. Yes, on a raw clock speed basis, it beats EPYC, but my use case depends on fast throughput, not just CPU.

Lots of people who use Vienna Symphonic Library actually use a second computer to serve up the samples from a custom host application, to your DAW running on another computer. It really does require a LOT of bandwidth

Was going to purchase from CDW Canada

CDW in the States doesn’t carry the board. I wonder if Gigabyte is being held up by tariffs, or some sort of certification.

Yeah, they list it as special order, so I’m not sure they hold them in stock.

Have you looked into ASRock Rack EpycD8-2T? My workstation is built around it and it works great with a 7302p.

EDIT: Oh! I forgot that ASRock has a Rome version of that board with PCIe 4.0 support, the ROMED8-2T. Not sure what the general availability of that is but it looks like a solid alternative to the Gigabyte MZ32. PLUS it supports USB 3.1 Gen 2 on one internal header, which saves me a slot.

EDIT 2: answering my own question, some retailers overseas seem to have this, or are at least taking orders, but not in North America yet.

The EPYCD8-2T is a good option, in that it has 2x M.2 slots, but like the Supermicro H11SSL it only supports PCI 3.0. If I can get more bandwidth/speed with PCI 4.0 I would rather future-proof it.

Are you using Windows on it? What I’d really like to know is how to properly install and set up the system - does it Just Work™ out of the box, or does it boot into some basic mode until you install drivers (presumably for the motherboard as well as any add-in cards?) and then reboot?

Coming from Mac we don’t really have BIOS setup to deal with… there’s stuff you can tweak via system preferences and via 3rd-party apps. It’s been a while since I built a PC from scratch, so noob patience is welcomed

Well if they eventually release such a supposed ‘TRX80’ platform… that would then be better than EPYC wouldn’t it? As cannot overclock EPYC, and also it’s boards… the vrm is always at most only 6 phases. In respect to the mythical TRX80: well if they ever want to release it then it would make the most sense alongside the (already known / announced) release of the 64-core TR cpu. Which is next month. Unless they have canned the whole idea of TRX80 in which case nothing will change there. Not heard any recent rumors about it so heh probably not very likely at this point.

Not heard any recent rumors about it so heh probably not very likely at this point.

I don’t think AMD ever said anything about TRX80. It is all just echoes of unlikely rumors.

Yeah according to Dr. Ian Cutress, TRX80 is not a thing.

Yeah, that is a completely unsubstantiated rumor based on one, possibly mistaken post at the USB Implementers’ Forum. The credible reporting with sourcing says that TRX/WRX-80 is fake.

At least until Zen 3 comes out, I don’t think we’ll see major changes. 64-core TR is very cool, for sure, but if it still sits on 4-channel memory with a 256GB upper limit, and has fewer PCIe lanes, it’s not as interesting for my needs.

What I’d really like to see, but isn’t a dealbreaker, is EPYC get a 7nm+ revision and faster core clock speed. Not that having a stable 3 to 3.5GHz across all cores isn’t bad (as shown in Wendell’s tests) but having the extra headroom / IPC of 3.8-4.0 GHz would be nice.

FWIW, I talked to Peter, the guy who puts together the tests for Scan Computers in the UK - they are the custom audio PC builders attached to Scan, a very large music/AV retailer.

He said they had done some initial tests with EPYC for music and audio, but scrapped them as they had to revise how their test suite worked - but they’ll be doing a fresh set of them soon - looking forward to seeing that.

Off-topic.
I really don’t know what AMD will do. I might be imagining this, but I thought Zen 3 was landing in 2020.
So no Zen 2 refresh at all? And will Zen 3 Epyc support SP3? Because I can’t imagine them making a new socket for Zen 3 based TR 4, since moving to TRX40 for TR 3 angered TR1 & 2 customers.

Back on topic:
Epyc 7H12 could be something you could look at (if one can find it at all). I expect it to cost as much as the Intel Xeon 8280 or a bit more. There was a not insignificant performance difference between the 7702 and 7742, so maybe the binned chiplets in the 7H12 could raise the bar even further, considering the 280W tdp.

Wendell, for me the TR / Epyc line comes down to the number of available PCIe lanes and memory bandwidth. For large sample-based instruments and streaming large multitrack music projects from disk, it’s essential, plus the ability to add lots of fast PCIe storage (extra slots…) and DSP cards. Most TR motherboards only have 4 slots.

Are there any DAW choices which make better use of multi-core CPUs?

The AAE is very good with multicore and will scale to whatever you have. Memory bandwidth helps a lot, as well.

What do you use that needs a lot of threads? Hardware

Two cases come to mind, one for me, one for a friend.

You can also adjust the cache size in PT if you need to, so just go big on RAM capacity if you are worried about lagging while streaming all that shit from the disk or overspending on SS storage.

Also consider moving the machine to another room and blast the fans. You’ll get further than trying to spin them slow all day and still keep it cool. it’s a nice bonus when you can track in your control room.