A note to new linux users / new AMD users in linux, about drivers

So! You just set up your linux box, slotted in your new RX580 or some shit, 5700 IDK, and now you install your system of choice. But what about drivers?

The last few weeks I have seen multiple posts from users who were confused on if they needed the pro driver or not and the issues that stem from using it (while compatible with all the cards normal amdgpu is built for, the proprietary drivers are more for the pro cards like the firepro’s or the RX Vega pro cards. You get the deal.).

Well, friend, let me introduce you to the wonderful thing in linux called

What are the benefits?

Well, for one, you don’t have to do anything after install. Just up and go. Install steam and OBS and start streaming right on your first boot if you want. The system has been planned to be this easy for a reason.

But windows needs drivers! Where are they?

Well, drivers, kernel modules, are built into the kernel, or are immediately accessible. Many drivers are also deactivated for many types of hardware for many reasons. So if you wanted to use… oh I dunno, an ati radeon 7500, you’d have a bit of a difficult time. Not because of age, but rather because it just plain causes problems.

A better example is a wifi card I got recently. A Linksys WUSB6300. Its chipset has drivers made, they are compatible with the latest kernel, the chip should work just fine, so why is it disabled?

Well, if I ran kernel 4.4 or equally aged (I think it was disabled in 4.12 or something) it’d work great, but later on kernels ran into so many conflicts with the chipset causing problems for other hardware and drivers that they disabled the driver. This happens more often than you think.

Wellll, not exactly. Companies like Nvidia, some of the stuff from realtek, 3DConnexion, etc, have drivers made for linux that you still have to install. If you get a new samsung carbon printer, for example, there is still no driver built in and you need to download and install it.

Nvidia is a mixed bag anyways when it comes to driver quality, as we know from past drivers being horribly broken. So, rather than have you go online, download the driver that may or may not work from nvidias site (some report positively, some negatively, etc), then go follow some silly TTY guide, I’ll do you a solid right now.

Install pop_os, ubuntu, or manjaro (or deepin, @THEkitchenSINK is the only deepin user I know though and I’ve never used it so I can’t recommend it yet) if you’re going to use nvidia. At least if you’re starting out. If you aren’t a new linux user, I don’t give a fck what you do. They have installers built in for nvidia drivers (or in the case of pop, a version of the iso with the driver properly formatted for nvidia on desktops or laptops with switching).

Actually if you’re an old hat in the linux community install a Matrox G450 dual head and lemme know how many fps you get in urban terror.

So should I sell my nvidia card for an amd card?

I don’t care. If you want to update your kernel and you have a nvidia card you’ll either need a new install or to uninstall the driver before updating (manjaro handles this rather well, as its an arch based distro, and therefore a rolling release); unless, of course, your OS can handle it all on its own (listed suggestions as reference). Its up to you. Personally I like AMD based GPU’s, but thats just because I was a bugtester for the amdgpu module in its early days. I’m biased, but I won’t tell you what to use or not use. Tensorflow is on linux and I’m having a blast on my MSI GS63VR with elementary installed playing with AI stuff.

If I was doing a machine though, I would be looking at OpenGL performance on cards. If you found a 380X, hawaii based card, or an RX card for cheap, jump on it. Its a steal and will make your life easier over all with basic user stuff.

But again, if you need nvidia stuff (cuda, tensor, etc) thats your deal. Just choose an OS that’ll install the drivers for you. I can never be fucked to screw around in a terminal for 20 minutes trying to get it to work.

What if I have issues?

Start a thread, go to the small linux problems thread, or ask in lounge.

You have an encyclopedia of aspies on here, go hog wild.

So should I sell my nvidia card for an amd card?

If you do ditch Nvidia for AMD, consider donating your card to the Nouveau project.

Install pop_os, ubuntu, or manjaro (or deepin, […]) if you’re going to use nvidia.

Thanks for the input. 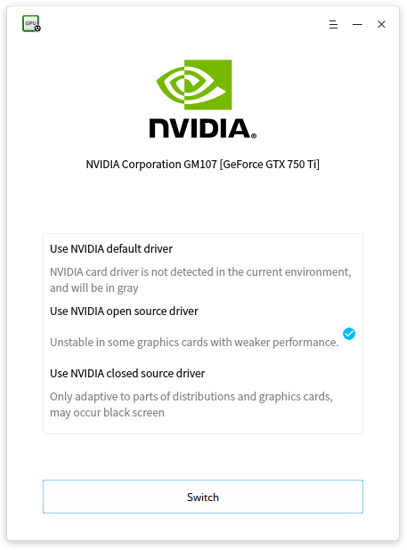 multiple reasons possibly. Depends on your compositor/DE. Screen tearing is a big issue regardless of what GPU or what DE you use. It tends to work for me on KDE, but your mileage may will vary. I think there’s an Xorg setting that fixes it in certain cases, theres compositor settings that fix it in other cases and so on.

Obviously your mileage may vary, but I believe they’ve cracked screen tearing with all kernels newer than 4.15.

Edit: Also, I believe the 580 is currently having problems in Linux irc. I’ve read quite a few things about problems with one of the RX 500 cards. Just don’t know which one it was.

Does the above apply to an older XFX 7950 card, I have a spare PC that I would like to install Ubuntu on to for gaming on Linux. Is there support out of the box for older cards?

PC Specs are as follows:-

I don’t expect to play anything high end on this one, just some casual gaming on a spare PC.

I’d try to shia lebouf it and see where it goes.

It’ll most likely work. I’d myself try to game on the default (open source) drivers first. I guess my card (r7 370) is the refreshed version so you should be ok.

About the post, @FaunCB that was awesome. Wish I had seen it when I jumped into the rabbit hole in the beginning of the year, would’ve saved me a couple pages read on the internet haha

Ha! Shia Labeouf it, love it

I’ve read the open source driver is the way to go with AMD cards these days, just wasnt sure if it would provide the same compatibility with older cards like the 7950.

Yeah, I’ve installed Pop OS as a VM on my works machine, I am really impressed with it.

On any amd or ati card there is no need to install drivers.

I’l be honest with you… I’m using mint atm with both the laptop and desktop, but don’t know why… haha

I distrohopped a lot to the point I lost an entire day booting three to four distros. At the end they’re pretty much the same, what differs the most is the initial setup, the DE (which you can change with a tad of work) and the package manager.

Pop is the most beautiful and readily available of the ones I went through. You just install it and voila, there it is, just some apt update and upgrade and you’re pretty much ready to go.

Ah Thanks @FaunCB, I will give it a go and see how things perform

Nvidia is the only modern gpu company you have to install drivers for. There shouldn’t be a “well what about this one” when it comes to red cards.

I think I was confusing myself with the AMDGPU-PRO thread I saw before about compatibility for red cards and couldn’t remember if that driver had to be installed and if it did, support for older cards etc.

Windows doesn’t work well on windows. I work on windows machines at work. It keeps me busy because of all the problems with Microsoft. Linux has such a huge set of resources.