A cheap gpu for a non-gamer, non-editer?

Yes I know a cheap gpu is a bit of an oxymoron right now. But I just upgraded to a ryzen 1700. I left my mobo, ram, and cpu behind. My dad is on this old all in one, and it’s laggy. My old cpu was still pretty snappy. It just didn’t cut it for the video editing I do. I figured I’d kick it down to my dad. But I need a good cheap discrete gpu to throw in there. It just has to be able to play videos pretty much.

TLDR: Need a cheap gpu, doesn’t have to be able to game or edit. Any suggestions?

What sort of outputs are you looking for?

Way too expensive for what it does.
The only positive for the 1030 is currently getting driver updates.

Although, if you’re video editing, that can be hardware accelerated by the GPU. So you might want to pick up a used 750ti on eBay or something.

So you might want to pick up a used 750ti on eBay or something.

Yes. Just vga/hdmi/dvi would be fine. The 730 or 710 seem exactly in the range i’m looking for. Shopping about now. But if anyone has brand, model, or sale suggestions i’m all ears.

No ruffalo I have a 290x for editing. He doesn’t do anything like that. Just has to be able to run word documents and videos.

I imagine the 1 gb model will be enough? 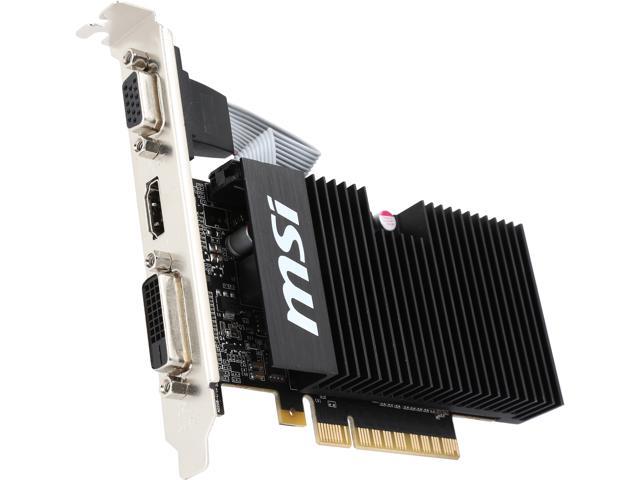 If the computer for your dad has an Intel CPU, it should have integrated graphics and you won’t need to buy a GPU at all.

If not, then just get the cheapest relatively recent GPU possible, which would be a 710 or 730.

It is an intel cpu. Erm. I thought it should have integrated graphics but my monitor is not picking it up.

You may need to enable it in the BIOS or something. Also make sure your PCI-e GPU isn’t in the computer as that would override it.

And yeah, clear the BIOS too, good idea.

Roger that. No discrete GPU in it. Just the mobo, ram, and a cpu.

It just didn’t cut it for the video editing I do.

doesn’t have to be able to game or edit.

So, which one now?

Yeah that confused me too, because you assume the Ryzen computer needs a GPU as it has no iGPU.

As I see it, his old intel computer is going to his dad (and may or may not need a discrete GPU) while he’s taking the new Ryzen one and putting his 290x in it.

Yeah you got it right rruffalo. The pc i’m on now is a ryzen with a 290x. This is what I game and edit on. The one that didn’t quite cut it is getting passed down to my dad as an upgrade.

The old one is a gigabyte ga b85m ds3h

It will turn on, but doesn’t beep. I couldn’t find the jumper, so I tried the battery trick. Still no luck.