Continuing the discussion from Automotive:

A few weeks ago I bought this: 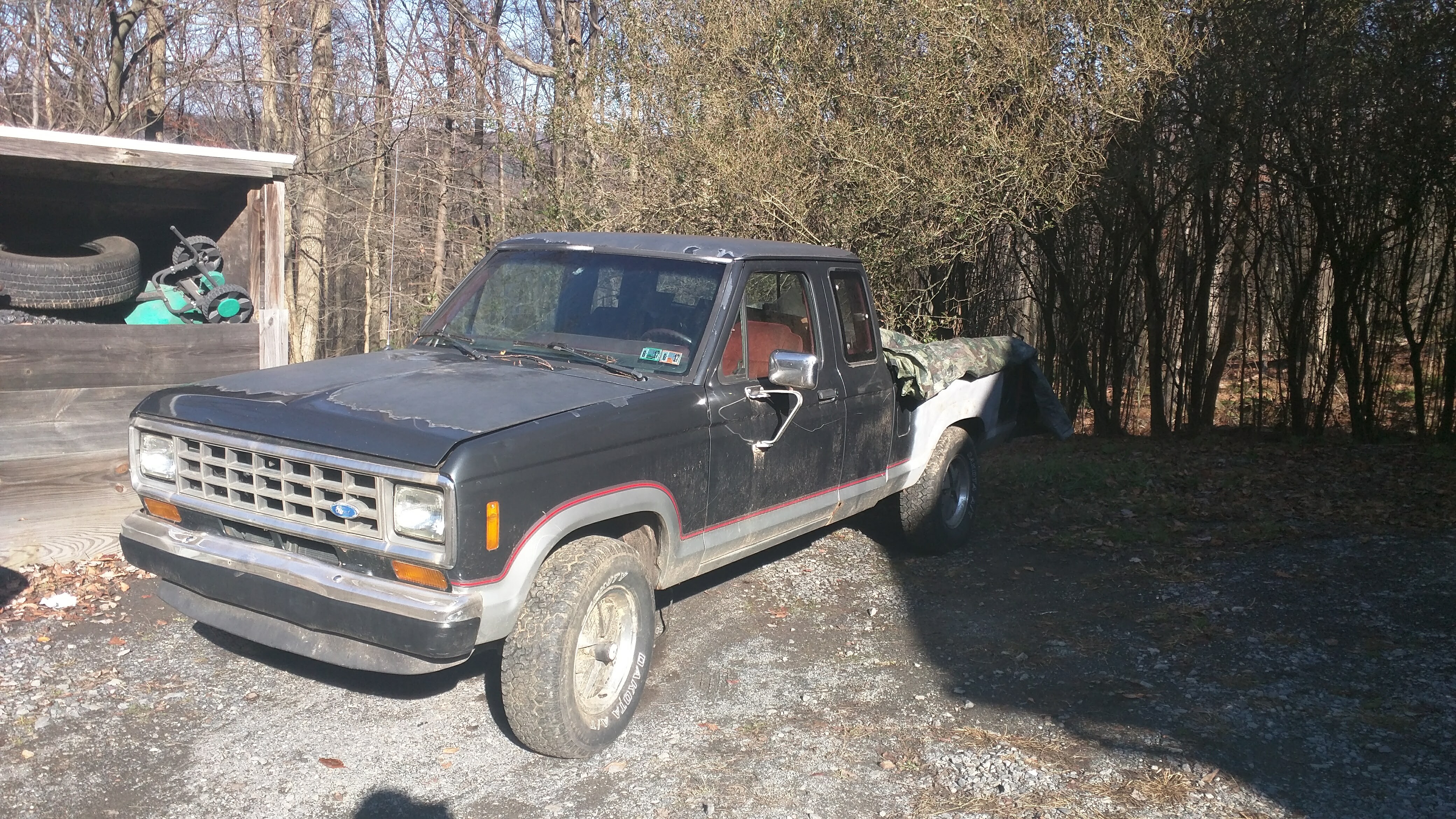 It’s 4wd, and about as stock/original as you can get. Oh, it’s a 4 speed manual with overdrive! I even got most if not all of the original upkeep documents from the first owner. Not sure if I’m the 3 or 4th owner. From the newest receipt (which is from 2008) I found in the stack of papers, it either has ~340000 or ~440000, since the odometer only has 5 digits and the receipt has the odometer listed as ~254000 it’s hard to say, guess we’ll see when I finally get time to meet with the guy I bought it from to get the title transferred. 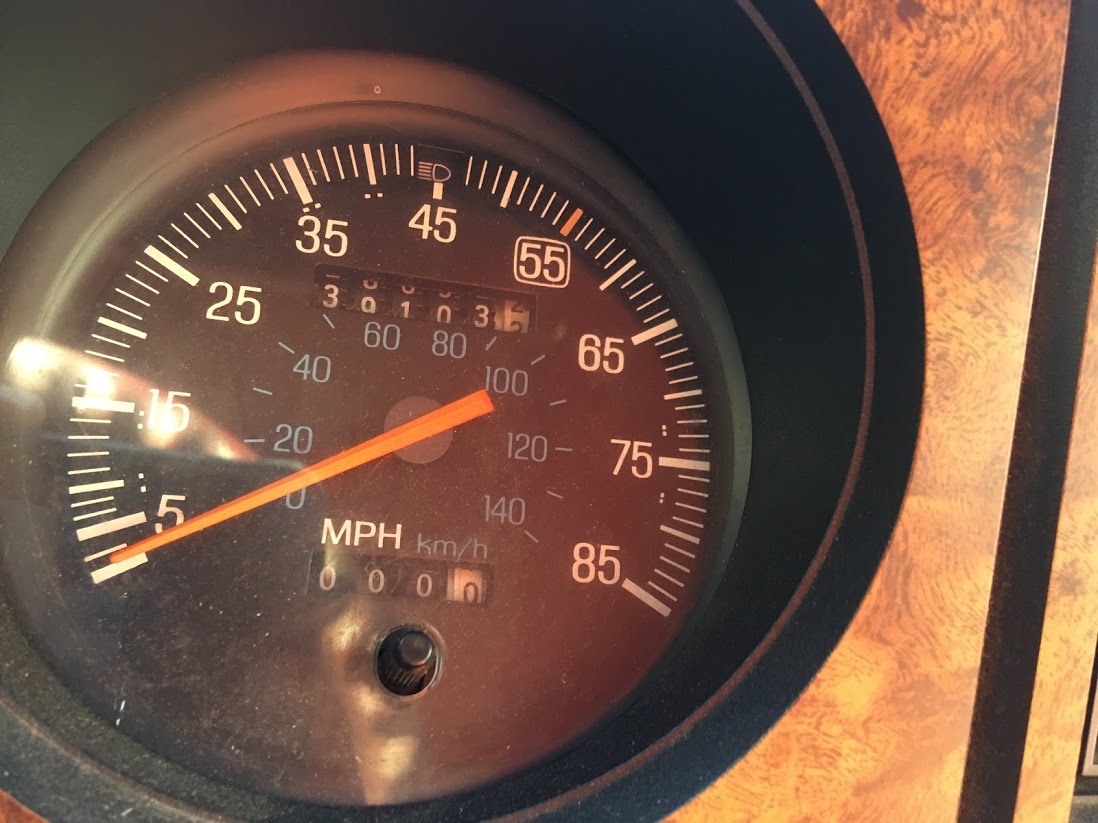 Most (if not all) mechanics will tell you that Ford Rangers are rust-buckets, and that’s for good reason. Most Rangers (especially the newer ones) get really rusty really fast. But not this one! The frame is solid, and the rockers are in pretty good shape. Even my dad who’s been a mechanic for about 40 years was amazed how good it is!

I got this truck for next to nothing… You might ask, what’s wrong with it? It doesn’t run. The guy that I bought it off of drove through a puddle, and water got in the engine… My brother is pretty good friends with him and knew he was going to scrap it if he didn’t find a buyer. So it made sense because I’m from a family of mechanics, and I’ve been wanting something that’s stick.

After talking it over with my brother, it’ll either be getting a different engine, or the one that’s in it just needs to be cleaned and replace a bent piece or two. We’re not sure if the block is cracked.

So far nothing was really done to it. The transmission had already been removed before I got it. And the engine was taken out one afternoon. And my brother spend an hour or so breaking wrenches trying to get the heads off. Things are looking promising at this point for the block just needing to be cleaned up! Just some rust spots that need some TLC. Still need to take it apart some more before the final decision. 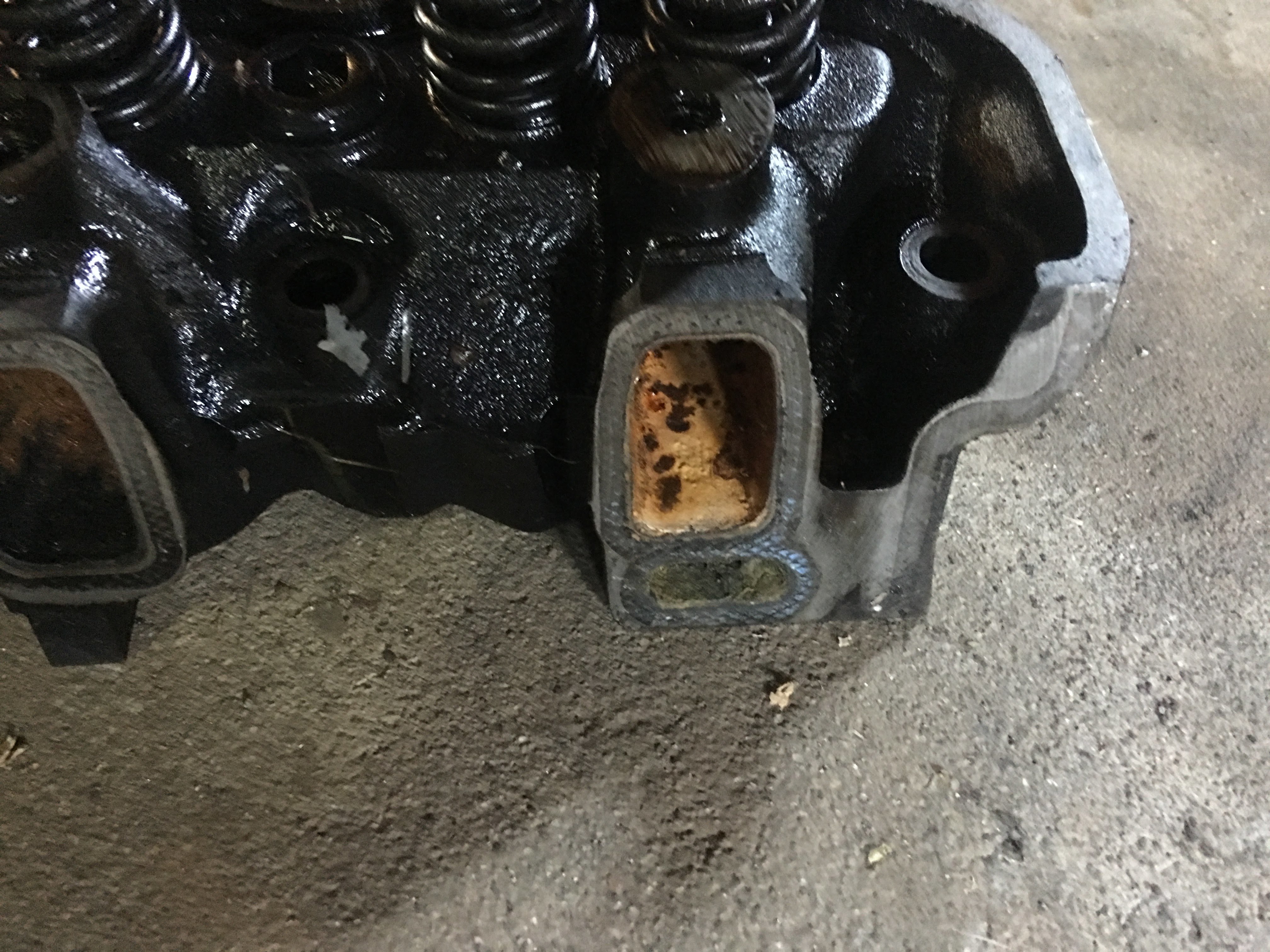 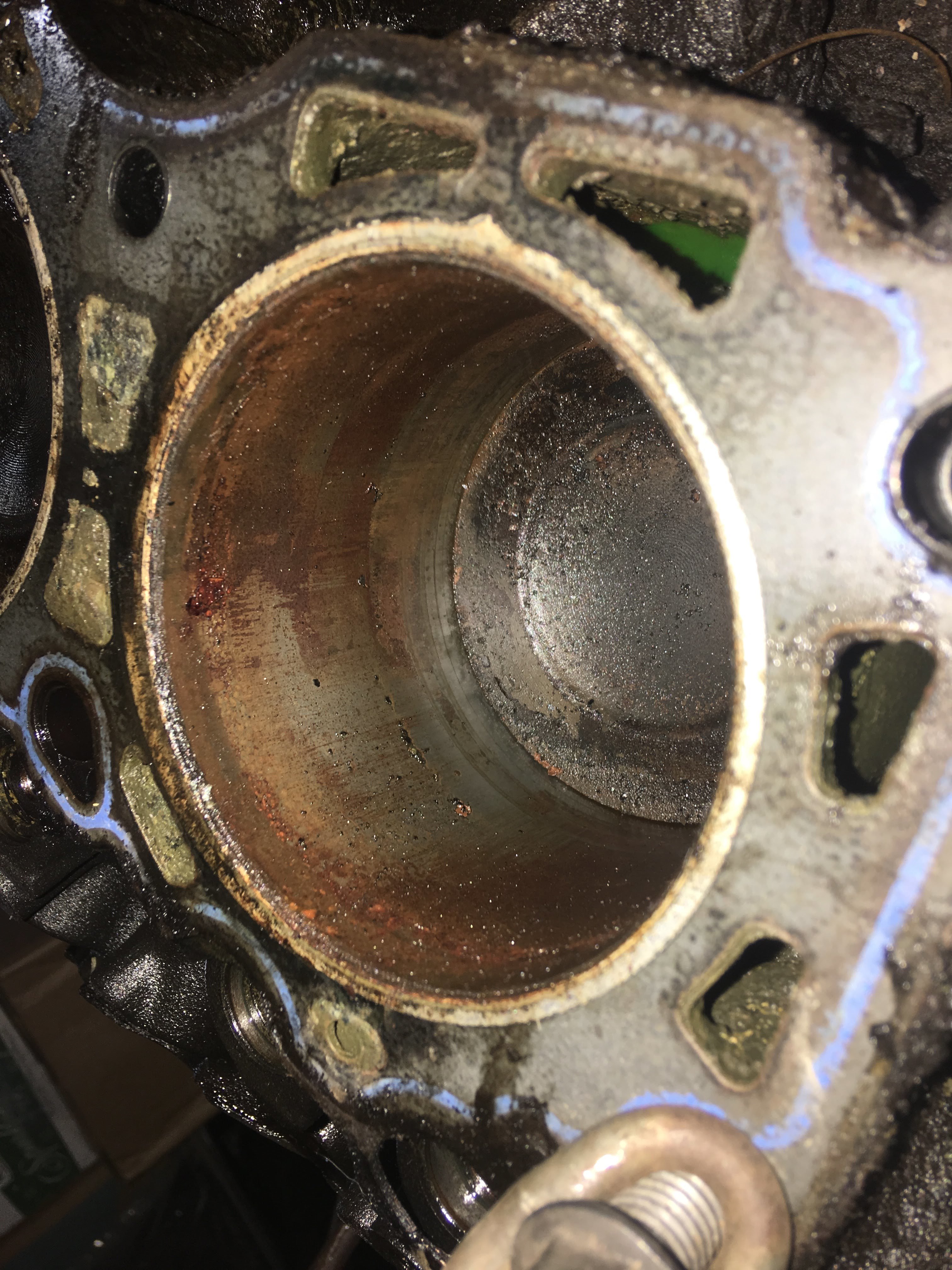 Things are looking good right now, the less money I need to put into getting it running the more I can put into other things to make the truck itself nicer.

More to come when more progress is made!

Nice score! I don’t know what it is like in your area, but by me used car parts have been having a race to the bottom with their prices. It’s cheaper for me now then it was when I first moved here 16 years ago! It simply isn’t worth my time and money to rebuild most engines since the gasket kits can often cost just as much as an entire engine from the junkyard w/ a 1 year warranty. It really depends on a lot of things, but there are a lot of great deals to be had if you have the tools and knowledge.

The puddle story is a bit worrisome. If it was just an electrical issue then it isn’t a big deal. If the engine hydrolocked, then there may be more damage than just what is visible. Hopefully it was just a head gasket. You might be able to get away with just redoing the top end gaskets. It certainly helps when the engine is kept relatively clean so you can see where something has failed, but that isn’t always possible dealing with someone else’s old vehicle.

Did you do a compression test before taking the heads off to narrow down the point of failure? Got any more pics?

Are the lifters functioning properly? You already got it apart, don’t put it back together just to have a lifter tap! I can’t seem to find the original article I used the first time I cleaned out lifters, but This WOT-Tech Article shows an exploded diagram. Doesn’t cost any money as long as you don’t lose the parts, and maybe 2 hours time to clean them. Anytime I remove a lower intake or valve cover on a pushrod engine I always check to see if the lifters are stuck and they usually are. Seen too many people forget that one and have to tear the engine back open.

Good luck with the rebuild!

LMC Truck has a bunch of parts in case you can’t find stuff local. (just a customer)
http://www.lmctruck.com/features/FR/FRYearsCovered.htm

It definitely got hydrolocked, plenty of small rust spots in the block. My brother is a lot better at rebuilding than I am, and he seems to think it’s not going to be that much effort to get it working.

Parts prices are weird in my area, it’s usually get a 2nd vehicle without bothering with a title or order a new part. For some reason scrap yards charge quite a bit around here, and most of them don’t allow pull-it-yourself, so going to one of them tends to drive the price even higher.

My dad has a pretty large collection of Ford parts, and I have a lead on a Bronco 2 that might be a decent source of parts. Between those, I’m hoping there isn’t much else that I’ll need to find or order.

You can buy working trucks for pretty cheap. By the time you start digging into that thing to fix problems, you can start to run up a serious tab, even on something as bog standard as an old Ford Ranger.

Here in SoCal I see cheap running trucks for sale all the time on craigslist, etc.

If this is a project to learn on, great, but try to do it as cheaply as possible. I hate to see people deplete their funds on a money pit.

Frankly, I’d see if you could part the bastard out. You might learn just as much and make money out of the deal.

This is a pretty well known site, and it has a great tech section.
Forum - http://www.therangerstation.com/forums/index.php
tech - http://www.therangerstation.com/tech_library/index.shtml
Yeah, I’m partial to the site…I’m a mod there. If you need help you can PM me. I’m not a geek but I do my own work and know most stuff about the late 80’s/ early 90’s trucks. I really miss my b-2. Currently running a 94 Ranger work truck and race a 91.

@NetBandit I wouldn’t say this is something I’m looking to learn on, but for me there’s more value in a truck with a solid frame and relatively rust free cab. Old cheap trucks on craigslist and such tend to be pretty rusty. Thanks for the concern, I am watching how much goes into it.

@alwaysFlOoReD Definitely going to keep that site in mind for trying to get more power out of the stock 2.9L, might end up deciding to put one of the 302’s my dad has lying around in it. Not sure if I want to put the money into something like that though.

I was a bit light on the details before, but basically the engine wouldn’t make a full rotation. Would just get stuck at the same spot turning it either way. After a taking it apart a little more, turned out a piston got completely f%^&ed. A few cracks and the stem bent. 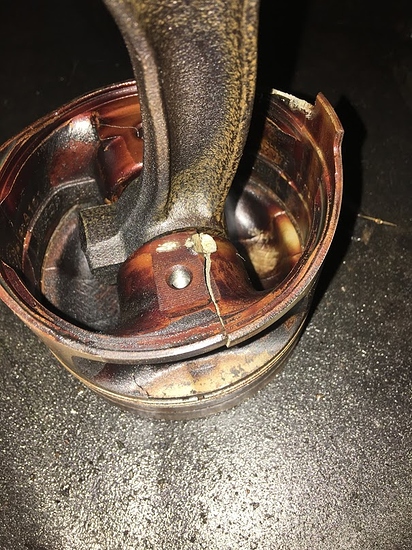 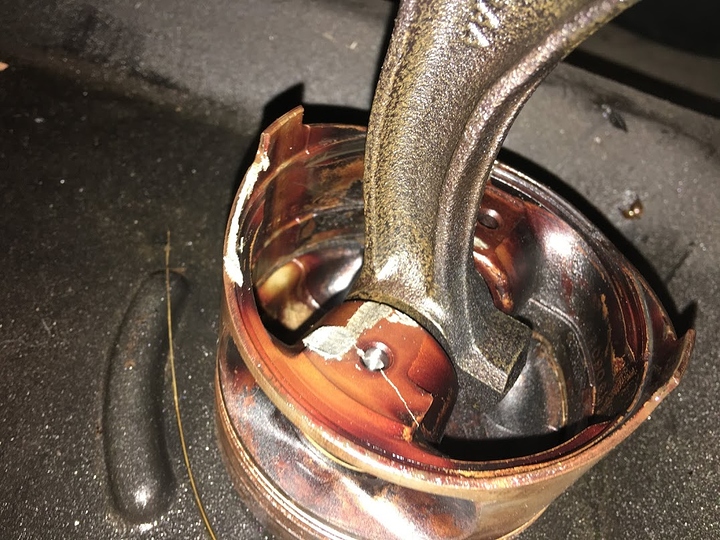 After this one got taken out, it turns freely. This is a good sign, but it’s still getting a complete teardown.

Complete teardown is probably a good idea. With that level of damage, check the cylinder head closely for flatness. May also have a bent crankshaft.

I still miss that car.

With that kind of carnage the crank is surely unusable. You would have to see if the main bearing bores (specifically around the bent connecting rod) are out of round or out of alignment with one another. I personally wouldn’t even consider rebuilding a block with that kind of mileage because numerous things are going to be out of flatness/square/alignment and would cost a mint to have machined back into a usable block, assuming it doesn’t have anything else wrong with it.

car-part.com has a huge list of junkyards that you can search to find things by condition, price, distance and such. I replaced an Eco-tec in an Olds Alero a number of years back and found an engine within 100 miles of me with around 60K on it for a reasonable price. I’ve also used that site to find places that would mail smaller parts like intake manifolds. If the junkyards local to you are really that bad then it might be cheaper to take a day and drive a long distance vs trying to rebuild.

I’ve seen too many rebuilds where people never got their money’s worth out of it which is why I usually implore people to explore alternatives. With a RWD vehicle you could stuff in nearly any engine/trans combo you want with a big enough shoehorn, but 4WD narrows that option. If you have a 302 long block laying around then it may or may not be cheaper to do a conversion. It would probably be worthwhile to price out all of your options in advance to see which path will give you the end result you want with a price you can live with.

Finally have time to get around to doing work on this truck again (wooh!)… Ended up having to let other stuff take priority, bla bla blah excuses…

Anywho, the block itself is in nice shape. To keep cost down, the engine is getting rebuilt basically stock (parts for that are going to be ordered within the next week or so). And most everything else is getting pulled from a Bronco II that my neighbor is parting-out.

Since it was nice out this week, stuff got pressure washed. 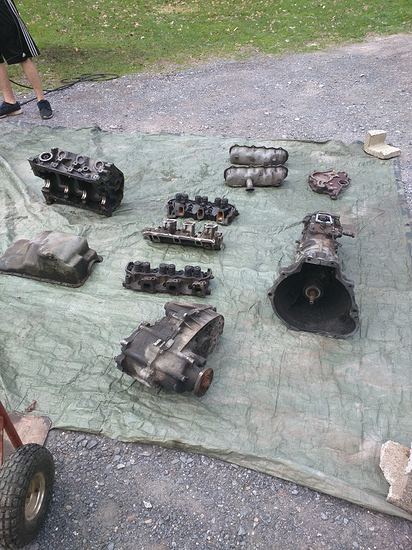 And the cab got gutted. The carpet was disgusting, and there’s a known leak so I expected mold/rust… 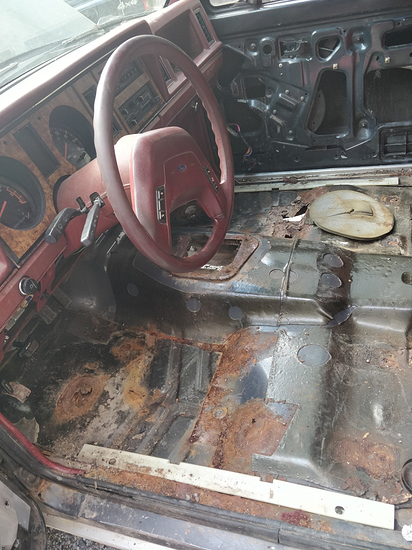 The floor from the aforementioned Bronco II is going to be transplanted (at least on the passenger side).

Yet again, this project was on hold… And it’s definitely getting annoying.

Well, rebuilding the stock 2.9L motor ended as a bust, every parts vehicle that I came across fell through. And 2.9L’s are really difficult to source the parts I need. But I managed to find a 4.0L! Which are significantly easier to source parts for. 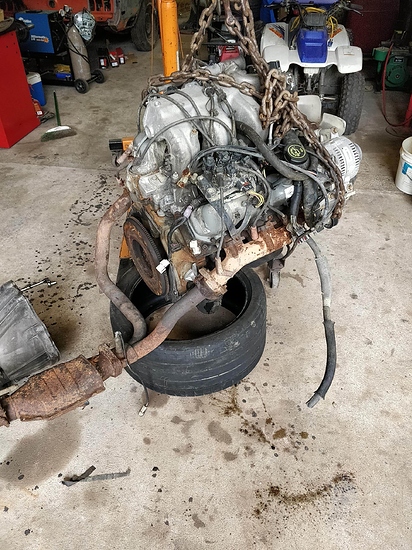 The guy I bought it from thinks it was out of a '94 Ranger and has ~160k on it.
This thing looks somewhat rough, but a LOT of stuff is still on it. And I got the whole thing for only $50 (which I will get back when I scrap the catalytic converters it came with).

It’s getting torn down for a quick rebuild, but it turns over as is! And the transmission for the 2.9L just bolts right on!

Hopefully there aren’t any other things that come up that stall this project, I really want to have the truck on the road before winter.