I had an idea for a community project. I could provide hosting, infrastructure, project management guidance and some development advice here and there (frontend/backend if the backend is python or php or possibly go) but that's about it.

Maybe something @Devon would want to work on? He was always asking after fun side projects to do ;)

The project, probably could be done in a few weekend hackathons, is a website that generates 3d printable models of I/O backplates. Project Code Name: Back plate-inator

The idea would be to make a pallett (like a painter's pallet) of cut outs for a back I/O shield and do a simple javascript UI to drag and drop cutouts and arrange them on backplates. It could ask the user for their motherboard brand and model and store the layout for someone to use in the future.

We don't have a backplate? Fine, make one. Once you make one in the web UI we remember the recipe.

Could probably break the project into a few major features -- the database, the front-end UI, and the 3d model(s) which is probably just a scriptable openscad model.

It would be a labor of love, but probably a good college student project. Maybe someone in the community already has openscad experience, or otherwise has experience with programmatically generating 3d models.

The end goal would really be to just plug the level1 community.

I don't know how useful this idea really is but if nothing else you could color-coordinate your I/O shield. Since RGB seems to be scary popular despite no one asking for that.

Could also be interesting as a "meta" project -- actually do a project about distributed software development, project management, how UI/UX evolves, planning this type of project, testing, automation and deployment. So we could get a video series out of it. But I don't know that its worth our time (dev time) to do it entirely on our own. With community members doing most of the development though, it could be a really interesting "case study" project. And somewhat actually useful stand-alone.

My worry would be 3d print thickness and strength. Back plates now are usually thin metal with a rolled lip to clip into place. The lip would be easy but the worry is it would have to be thick enough to stand clipping in without cracking and then would it be too thick to plug things in, like say a USB not making good connection ad it cannot go far enough into the port.

Make it thin enough and then strength is a worry. Not so much a problem for metal sintered 3d print but plastic might be a push.

Good idea though, people picking up older motherboards for dumpster dive builds or second hand stuff may not come with a plate and a database of readily printable/configurable ones would be nice.

Sounds fun! I have nowhere near the skills required to lead, but I'll follow closely and try to sort how I could be of use or at least learn from the project once I get back to campus in about a week.

My worry would be 3d print thickness and strength.

I wonder how much the production price difference would be with the implementation of laser cut or water-jet components. Maybe make the I/O sheet itself cut from metal, but have a 3D printed border? Then there's assembly costs and concerns. I reckon theres a way to make a totally 3D printed version that fits the bill. It just requires prototyping time and thoughtful design. I can sign up for some of that! Thank goodness for university provided 3D printers.

Back plates now are usually thin metal with a rolled lip to clip into place.

Secondary thought on this. Set up the 3D model generation so that the main point of support isn't the (previously rolled metal) lip on the edge of the plate. You could use the fact that some ports (video out, mainly?) are more robust as a way to sort of pin the I/O backplate between the mobo and the case cutout. If the 3D printed material can somehow clip onto or press-fit over these more robust ports, then you may be able to get away with a thicker plate.

Edit: Or somehow use the VGA port or other threaded holes to mount the I/O plate?

If people want some info (and basic dimensions) about I/O backplates read pages 13 through 15 here:

This could be super useful for buying ebay motherboards. So many boards that are in good working condition, but don't come with an I/O shield. I've been browsing a lot of dual socket server stuff where backplates are a rarity.

That didn't take as long as I thought it would: 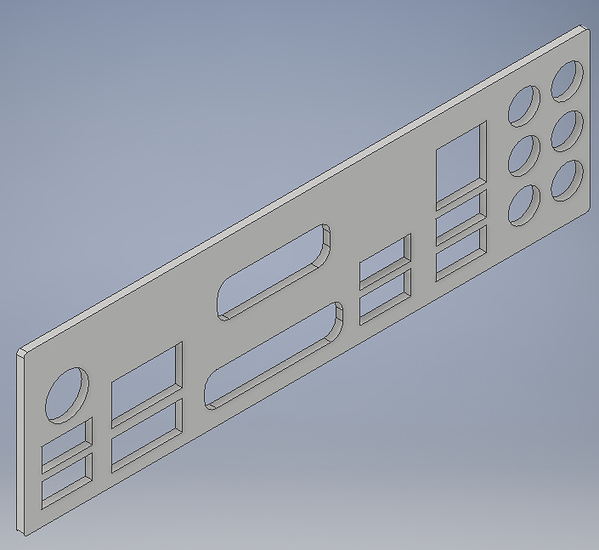 Copied from the rear I/O of an ASUS M4A785-M I happen to have sitting behind me. I'm doing a quick print for fit to see if the ports line up well. Or I should say a quick print of a section of it, my print bed is about 15mm too small for a full backplate :(

EDIT: I got the audio ports slightly off, but the other parts are looking fine so far.

@wendell just got the email. Maybe. I can hash out some things in the PM tonight and tomorrow.

All that I would be concerned with would be specific sizing of ports and where to find the specifications. It's really straightforward once I have the measurements considering most ports are of similar size.
Could possibly do a set series of known port sizes and allow the user to drag and drop them.
I'll throw up a repo in a few hours.

All that I would be concerned with would be specific sizing of ports and where to find the specifications.

I believe Foxconn and Lotes are common port OEMs. Looking at Foxconn's website I see all the dimensions for all of their ports, Lotes seems to be a bit skim on details, but Googling the part numbers works.

I don't have much experience in openscad but I do have lot's of experience with Autodesk Inventor, Fusion 360, and Trimble Sketchup. This sounds fun and I can already see RGB I/O shields on the horizon. Needless to say I can help with what I can.

I am pretty good with Blender 3D modeling and that's about it for this project i could contribute. So i imagine for the actual 3D print we should use CAD. But for visual feedback in the program there could be a nice FBX mesh.

I am actually doing CAD homework right now and we are building dozens of lego bricks from one brick using parameters and an excel spreadsheet. I think that could work for an I/O shield. I'll be make a few z270 mockups when I have spare time.

I can test these out in a few different materials and on different machines. My lab just got a new printer from objet that will print in way more materials than our old objet 30. I actually think one of the semi flexible materials might work well.

Can it print in diamond? Gotta bling out my system.

No but it will print in poly methyl methacrylate!

Print some in colorFabb bambooFill for shits and giggles.

At some point i would like to make a case from scratch because nothing fits what i want. they all compromise on layout, io, and aesthetics at some point.

That's awesome. I'm going to go ahead and assume I can't afford this printer, but I want one.

Those are all fairly standardized as far as I know, so I think something like that should be quite easy actually.

@wendell Maybe the 3D printed backplate idea could be expanded to just 3D printed computer parts in general in time? With things like adapters and covers and brackets and stuff?

I do a lot of front-end JavaScript if you need a developer there. Another project on the portfolio wouldn't hurt.