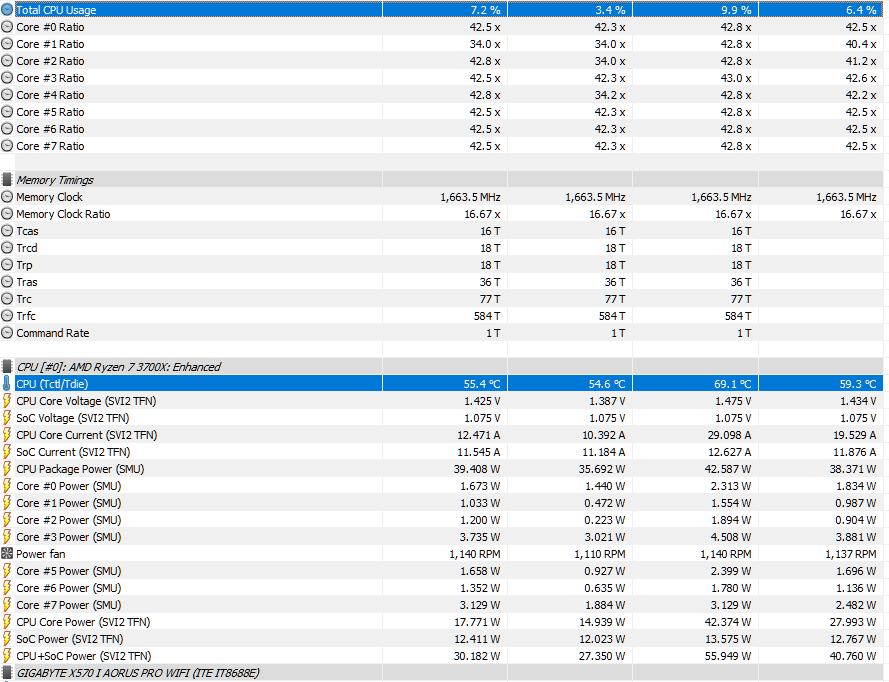 Did I mess up with putting on the stock cooler? My CPU sits at ~60c Idle and the stock wraith fan is pretty loud when it runs at 100% every time it goes over 70c (so any time I’m doing anything other than nothing). Is this normal for the 3700x or did I mess up and should I clean and reapply thermal paste? I did have to move the cooler a decent amount to get the clips on the mount, I’m afraid I somehow bonked the pre-applied thermal paste on the cooler in doing so.

Hard to say without knowing your ambient temps. If you live in a hot climate that could be fine.

That said Robert Hallock from AMD made a post over on Reddit talking about high idle voltages and temperatures for 3rd gen Ryzen.

It seems some monitoring software is waking up idle cores to poll their status and that’s causing them to boost unnecessarily. According to the link below, see if it idles cooler using only CPU-Z.

Those clocks are not idle. Something is going on.

Im realizing thaf I cant treat this Ryzen like my old 6600k… Stopped using high performance power profile (which forced 100% clocks all the time) and switched to Ryzen Balanced profile. I also set my CPU fan to not hit 100% until 80c and I wont use hwinfo to check temps, I’ll just use ryzen master for now. Ill leave it “idle” overnight while steam downloads some games for me and I’ll take a look in the morning where its sitting at. Thanks for the responses!

I usually enable high performance setting as well but I always set the minimum to 5%
You could also check what is using your CPU with task manager. Could just be some updates but I would not know for sure.

I checked it this morning, it seemed to be idling in the high 40s which is a significant improvement IMO. That high voltage is reported also by Ryzen master (1.435) and is actually the default setting for “Game Mode.” I’m using the Aorus X570 I Pro Wifi and everything related to CPU performance/OC is set to default. I might have to look into undervolting and just trying to get stock performance (4.4ghz boost) out of the chip while keeping temps cool. Its in my basement where its 75°F at the most, so I dont think ambient temps are the problem.

Honestly, its the noise that bothers me so much. I sold off my noctua u12 with my 6600k and I think I’ve been spoiled. As lame as it sounds the only reason I havent bought a new one is because I want to keep the RGB hahaha

I remember Jayz2Cents saying that his board came with similar voltages default, and that those where way overkill even for Overclocking. Maybe drop those voltages a bit?

Thanks for that video!! I think that is the problem. I do not intend to overclock on the Wraith Prism, so I’ll set up some sane voltages and see how much of a difference that makes.

I’m building out my 3700x tonight, will see what my temps are.

Edit: Mobo was dead on arrival

Should have replacement here today.

So I have an EXTREMELY similar issue with my 3600x. Except I tried 3 different coolers, and 2 motherboards with the same idles and load temps. I saw the JayzTwoCents video and tried setting the voltages to what he recommended and all it did was lower my performance.

My ambient temps is a little on the warm side considering it’s summer, however, my 1600X (OCed to 4.0GHz mind you) does not idle like that at all, and on the same motherboard. Idles at 35C to 38C; and it doesn’t even reach 70C at all, even when benching with Cinebench or 3D mark, while my 3600x reaches 76C on the drop of a hat.

@dontpokethebear3893, if you happen to find a solution, please let me know.

For what it’s worth I was running into the same problem with my 3700x. I was getting about 55-60 degrees just sitting doing nothing. Checking CPU utilization shows me that the Ryzen software is using like 15% at times so just having it open to check temps is increasing adding to the problem. That being said I couldn’t stand the CPU fan noise on the stock cooler so I got a 212 Evo and the temps are mid 40s now so my advice is get a better cooler and some decent thermal paste. My room is about 72 and have ample case fans.

@Nerodante87 @agrzesiak I did solve the problem: getting a better cooler and understanding how different programs affect PB. If I had steam, gog, etc closed and only CPU-Z open, I could see my voltage drop below 1v for true idle. Too many background programs are causing light threaded loads to boost with up to 1.5v out of the box. I went big and got the be quiet! Dark Rock Pro 4. It’s virtually silent now and keeps the CPU 10-15°C cooler. I’m in love.

Would you like me to close the ticket as the you seem to have resolved your questions?

Seems like the BIOS just need more time to iron out the bugs.

I saw that video in my subs. i think its the best one yet. It covers programs causing false loads/high voltages, AGESA, Ryzen power profiles, normal v auto voltage, RAM timings… Good job on their part.

Take your voltages down. They should NOT exceed 1.35 Volts

In fact a good rule of thumb is under 1.325 V… manual voltage control is not daunting… I suggest you try it. Current EFI is a bit strange… I also recommend manual overclock and disable CBS… Definitely if you having voltage surges avoid PBO

I dont want to be rude, but I’m not sure you know exactly what you’re talking about. It’s widely known that Ryzen 3000 can use over 1.4v on lightly threaded loads safely. 1.325v is the safe limit for ALL core. This is the default boost behavior.