Boost all core shouldn’t exceed 1.35 V AMD has said this. I think there is a ton of confusion around it and understandably so. I am talking about engineering wise. I’m an rf engineer not silicon but silicon has limitation … self heating . Electromigrstion. Perhaps it’s time for another engineering post

And don’t worry about being rude. You were not rude at all. I’m a frank person

OS based programs are also reading bad voltages vs EFI

I had the same issue with high temps and voltage of 1.4 to 1.5 in idle. Done everything as I should according to AMD but nothing worked until I switched back to the normal windows balanced power mode.
With that I have around 1.2V idle and the same during stuff like surfing. Temps decreased to around 34 to 45 C “Changes really quick”.
So it might just be that ryzen balance mode is kinda bugy. Oh and im running 1903 which should have been the windows version with the bad balance mode.

Yeah 1.45V is way too much for stock speeds.
Seems like a bios related issue.
I would likely start to set a fixed voltage of 1.30V / 1.32V,
and play around with some of the LLC options, to see what that brings.

Hey man, After a number of issues a parts exchanges I’m up and running. I have an R7 3700X, cooled by an 280mm Aio, on an Asus Prime X470 Pro (which doesn’t have the best vrms but it seems adequate for the lower tdp processor.) I applied the thermal paste and manually spread it over the cpu. I’ve left the OC mode on Default for now and just keeping an eye on temps/performance.

Idle temps seem to be around 45-50c. In the Cinebench, Division 2 and Metro Exodus I’m seeing around 57c most of the time and generally am in the 55-60c range for anything intensive. My voltage can reach 1.48 when idle but drops down to 1.25-1.26 during a heavy load. Compared to the i5-6600k I was using before this, the cpu really chugs and I’m very happy with it overall.

If you want me to test anything, let me know. I’m happy to poke around.

Thabks for the response! I posted later in the thread that replacing the cooler and understanding how to properly monitor Ryzen voltage was the solution for me. I also upgraded from a 6600k, and I am experiencing very similar temps/performance/voltage to you. I also use it to play Metro Exodus a ton! Would you mind letting me know what you can get in Cinebench r20, though? I can’t get over ~4700, but I saw that the average reviewer could get over 4900 in the reddit megathread. So far this is how I have everything setup:

Sure, I will update here tonight.

(post withdrawn by author, will be automatically deleted in 36 hours unless flagged)

Dying to know what this was

It was just to comment that the X570 Taichi’s SB fan design is no bigger issue than any of the other questionably laid out boards that put the fan inline with the first PCIe slot. (Not to mention the USB-C header being blocked, WTF)

I have a Powercolor Red Devil Vega 64 which was installed in that slot for my initial testing, before I moved back to my riser cable setup for my Tt Core P3 case. During that time, after I found the control in UEFI for the SB fan and set it to Silent, I never saw the SB go above 70-72C. This was with the Vega set to 1703 core and 1075 hbm running multiple runs of Time Spy and Firestrike as well as various games at 2560x1080.

Sorry, I deleted because I am not used to this forums weird thread/conversation/quote list and and thought I responded to the wrong post and just didn’t bother to retry… until I saw you replied to it.

(Not to mention the USB-C header being blocked, WTF)

My buddy has this board. Give ASRock call .

They are aware of the oversight and working on right angle connectors that will resolve the issue.

before I moved back to my riser cable setup for my Tt Core P3 case.

Check if your riser cable supports PCIE4, quiet a few reviewers had to stop using them due to issues with the Radeon cards and extension/riser cables.

My Agesa 1.0.02 version is. Asus has paid lip service to updates on anything but their x570 boards so I’m still waiting for them to get around to me. Until they give a bios update I’ve left the OC Mode on default and the my memory at xmp 3200mhz profile. I’m dying to tweak it but don’t expect the board to do great until its on a better AGESA version.

I’ve had more luck on the Ryzen Balanced Plan that on Ryzen High performance, maybe give that a go? Read somewher on Reddit (but can’t find it now) that Ryzen balanced for 3rd gen enables the 1ms clock ramp times.
The Ryzen Master software seems to be the only cpu monitor that shows when cores are in sleep mode so, I’ve been keeping on eye on that. 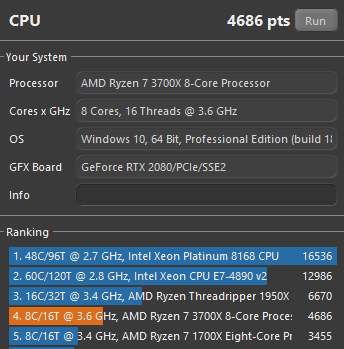 Temps stay at around 56/57 for the benchmark and voltage is around 1.25.
All core CPU seems to be around 3.9ghz( almost 4ish) the whole way through.

I think AMD has more bios work and tweaks to do, Zen 2 is going to be all about patience for now

Thanks, thats an awesome response. So it seems that with you on 1002 and me on 1003ab, we are getting the same clock speeds and cinebench scores.

Yeah, I don’t think we are going to see any real returns on until AMD really dials in the CPU settings in AGESA and the Motherboard vendors are able to take that and get better Bios setups.

Misery loves company though haha. The Zen 2 brotherhood of waiting.

Try setting memclk and if to be 3533 not 3600. Something weird happens around 3600 and it cobbers boosts and makes for crazy heat

just installed mine in the MSI B450 Gaming Pro Carbon AC and yes, compared to the 2600 before at 4.0 GHZ it runs hotter, but overall with XFR (which i can now use) it manages to stay quiet and coolish. Idle between 35 and 35 C (with 240 mm liquid cooler) and load never over 63 C . Tho i don’t get the full boost like you guys, max boost on 2 Cores is 4.325 GHZ with the other at 4.275 and with heavy load on all cores it goes to around 4.025 GHZ but also according to HWInfo the Voltage dials back to 1,2 V which seems a bit low, but I guess HWInfo also doesn’t read out all that well. Anyways I am happy with 35-45 Idle and max 64 C

I tested my 3700X with ryzen master and took these screen shots. one has ryzen power saver pp one has extreme performance one I overclocked some of my cores 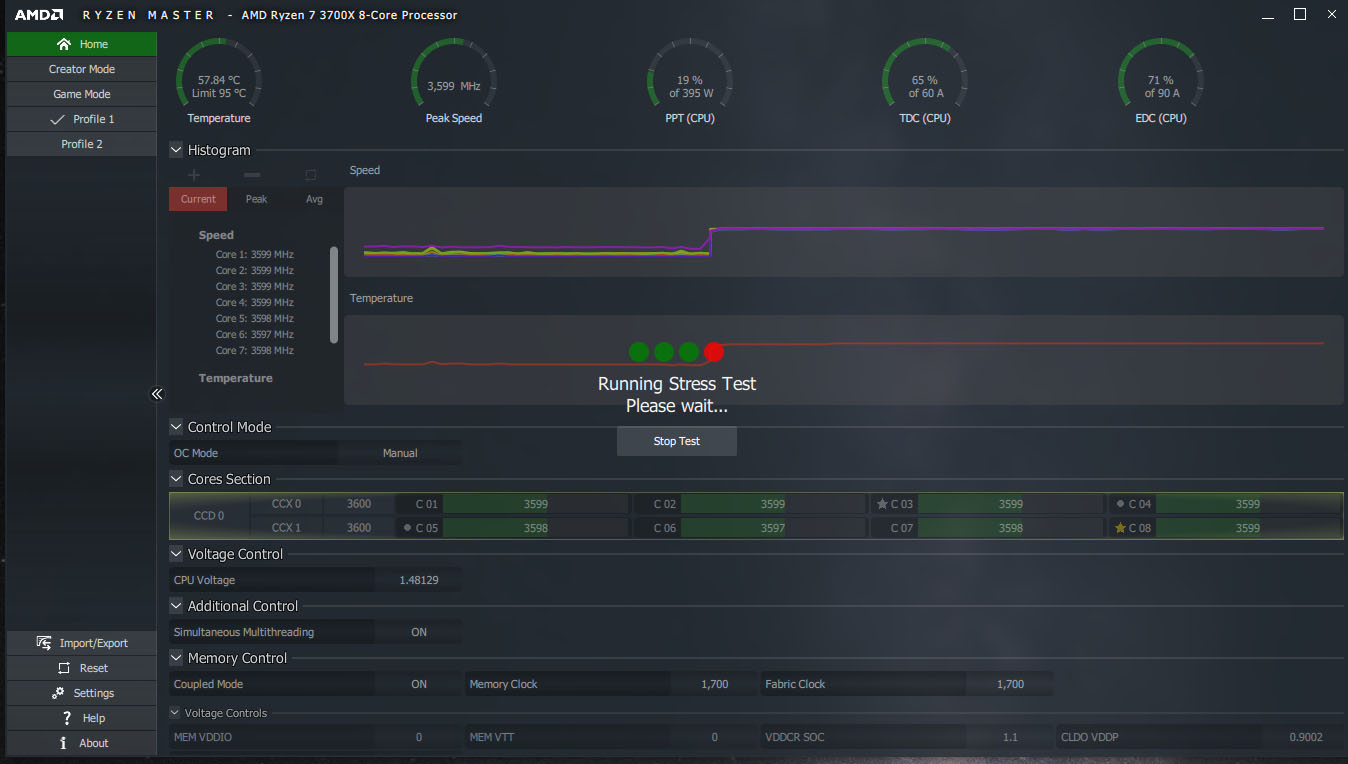 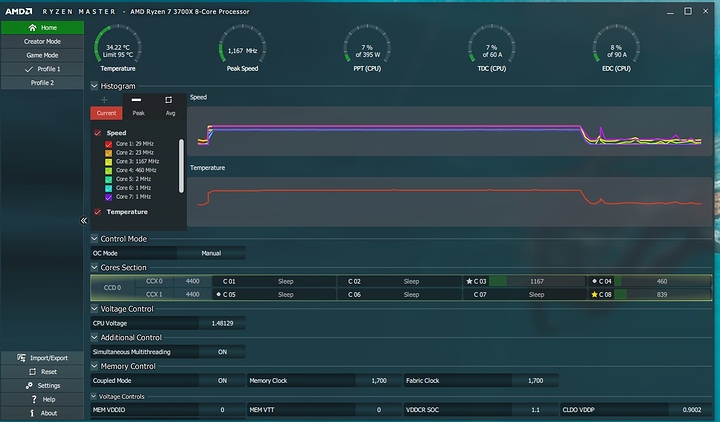 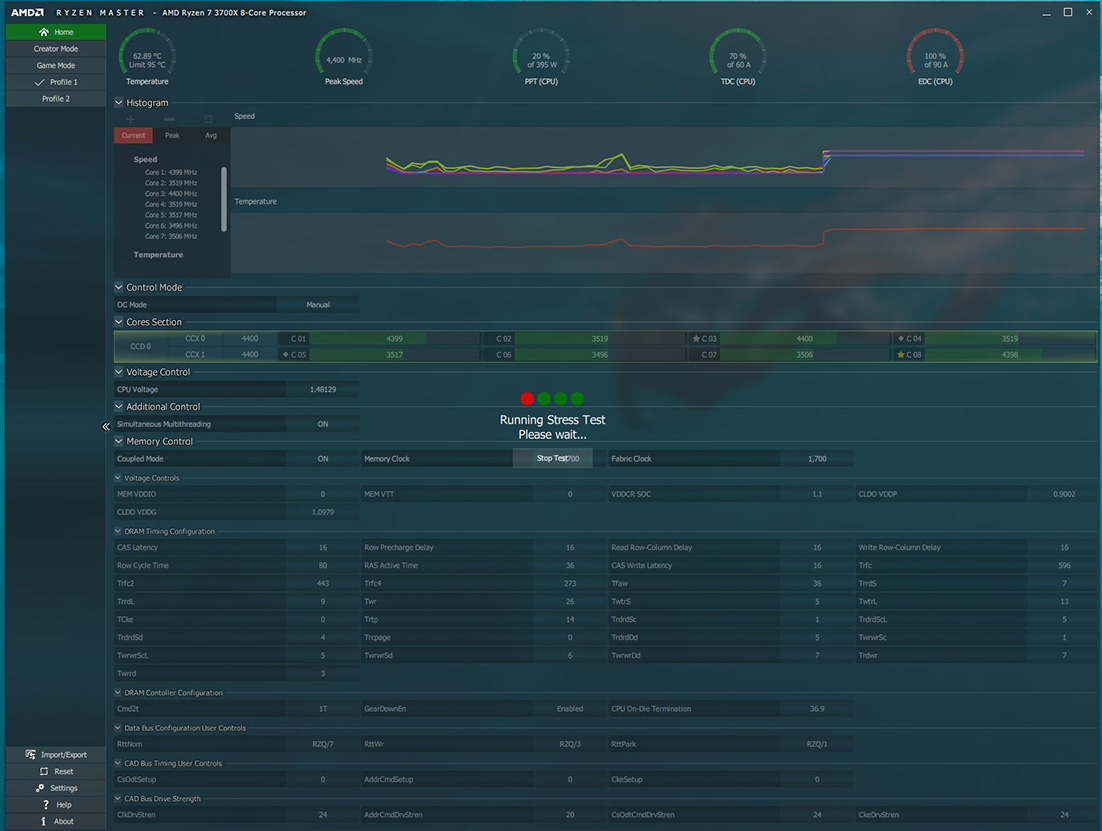 so as far as I get it, yours speeds up to 4.4 GHZ on single cores? thats nice man, I haven’t tried with ryzen master, it seems to heavy to run in the background all the time but for checking clocks etc i should compare it to HWInfo. what MB did you use

would you say manual OC is worth it? I have the feeling XFR and PBO are okay enough for now tho voltages seem high