So far I plan on keeping it, mostly because the battery life is awesome, it has good enough power, MagSafe, and it’s super quiet. It’s a great user experience. BUT I don’t really need it, so I’m still on the fence. I have until January 16th to return it thanks to holiday extended returns. So if there’s anything you’re curious about I might try it, as long as it doesn’t cost money or destroy my computer

The Missing Package Manager for macOS (or Linux).

Other software, instead of parallels perhaps crossover (The team behind WINE) Crossplatform support… Otherwise thanks for the review,

For now it says requires macOS 11 or older, so I’m not able to test it on the new computer because it comes with macOS 12. But if I end up keeping it, I’ll definitely give it a try.

Can you try video compression using handbrake and h265 codec? Both software compression and he accelerated (videotoolbox)?

I’ve been using pkgsrc from NetBSD on MacOS and its surprisingly good. I’m not a big fan of how Brew packages are installed as user writable.

Yea probably not so sane defaults for brew, but that can be changed with some terminal tinkering or some other way…

Would be nice to just have one and replace the other two with USB 3 ports since most peripherals still don’t use Thunderbolt. You really only need one for docking. And if you don’t have a dock, the only other thing it’s really useful for is external SSD’s. So you really don’t need three of them. Maybe two to be safe, and swap one with a USB 3 port.

Do you mean that you want to see a Type-A port? Because all of the Type-C ports support both TB4 and USB4 which in turn supports legacy USB.

None which where USB comes close…

Do you mean that you want to see a Type-A port?

The upsides to TB over USB are many…

True, but regardless it’s physically impossible to plug my mouse into a TB port and have it still work.

True, but regardless it’s physically impossible to plug my mouse into a TB port and have it still work.

Dongle life; C to A for your mouse. Not that you’d want to anyway, MacOS has atrocious mouse acceleration.

I don’t have a problem with docks at home, but I’m not carrying dongles with me everywhere. Luckily the Razer Naga Pro has bluetooth and it’s good enough for gaming on the go.

Can you try video compression using handbrake and h265 codec? Both software compression and he accelerated (videotoolbox)?

I’m not sure which metrics you’re looking for exactly, but this shows the speeds at least. This is with a 25-second clip of 4K 60fps HDR video from the iPhone 12 Pro. Fans kicked on during the first time, but I had to like actually listen for them. They’re very quiet. For the second time using VideoToolBox I didn’t hear the fans come on and it was super fast.

I should have recorded the exact times, but you can kind of get an idea with the fps and also how much time and % is remaining. 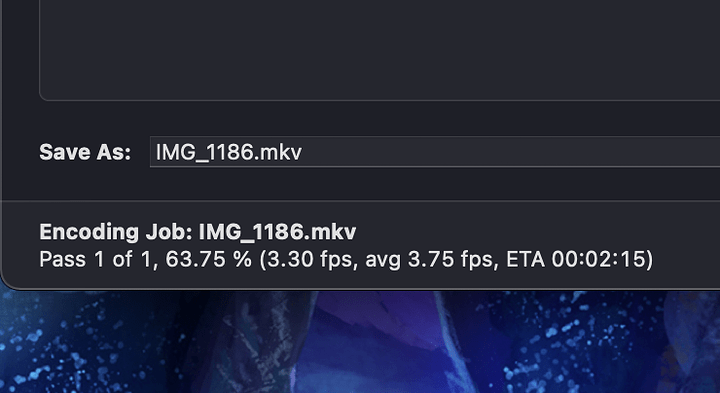 Linux is the place to be, but not available on M1 Macs.

Even though it’s a really nice computer, the idea that I practically can’t fix anything on it if something breaks is becoming a bigger turnoff the more I think about it. 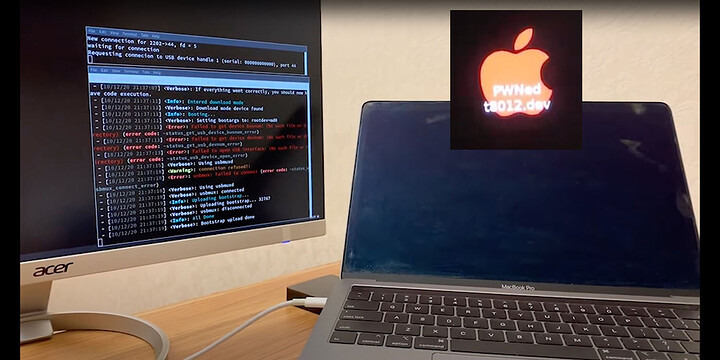 The T2 exploit team who found a way to takeover the security chip in modern Macs has demonstrated a way to do so without user intervention–using nothing...

I wasn’t aware that it was possible to really customize anything other than the wallpaper, light/dark theme, and the dock.

Ya I’m thinking I’m going to do the $99/year plan, once I decide whether or not I’m keeping it.

I wasn’t aware that it was possible to really customize anything other than the wallpaper, light/dark theme, and the dock.

i use garage band osmixer https://mixxx.org/ audacity and alot of analog stuff for my sound making
you dont need to suck apples tit for everything you are just paying the early adopter tax of waiting for devs to do their work

Ah, I’m not sure if there’s any point in even trying then tbh. I don’t like to wait on updates, except sometimes I’ll give the major OS upgrades a month or so to iron things out.

That I know of, I was just hoping the App Store would be a super neato place, but it feels more like it’s just a place for Apple to promote apps that are willing to give them a cut of the money.

I mean crossover specifically. It might work, I haven’t tried it, but it says macOS 11 or older.

installing cross over now on 12

any tests you want done?

Okay. Seems legit I’ll compare both to my 4500u laptop. My 5820k used to get around 17 on software. I am hoping video toolbox gets native support.

I’d be interested to see some comparisons with other laptops too. I think I’ll try it on my Xenia and desktop. I doubt it’ll beat my desktop though.