which means I’ll be going RAID-z2. I feel like this is a bad idea

It will be fine

I would go raidz2 up to maybe 12 disks. Then I would consider raidz3.
Just use SMART and scrubbing and make it auto-mail you if there’s a problem. 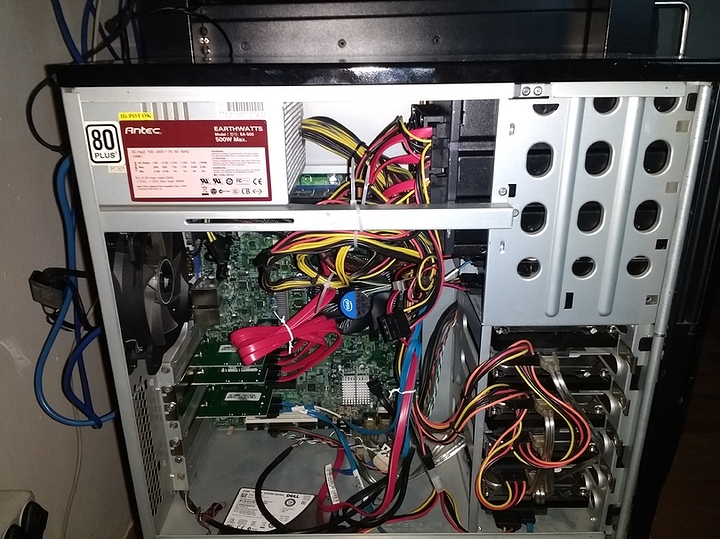 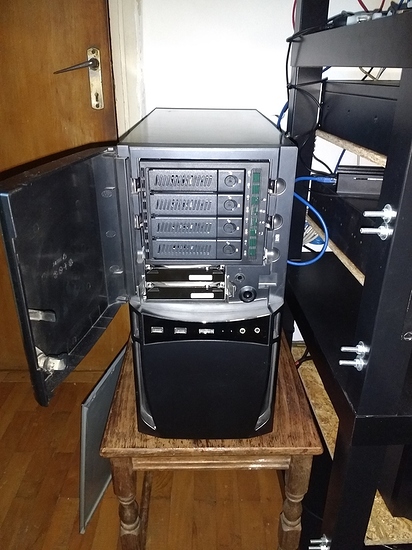 12 disks will have performance degradation

and I really can’t fit more HDDs in my case

That’s for the best imo. Because 10 disks on sata is my absolute maximum I would try to run. (Again, just my arbitrary numbers)

Back with other updates. I’m not sure what is happening and I can’t find any logs, but my server randomly restarts. I brought a Seasonic 430W (older) 80+ Bronze PSU, in the hopes that the PSU is the one that craps out, although the S3420GP does have a blinking Amber LED which doesn’t indicate anything (the manual says either that the RAM had too many corrected errors, the system may be too hot (doubt it), or the system may be failing, which could be possible. And ras-mc-ctl reports no errors.

Because the server keeps restarting, I can’t finish long SMART tests on the HDDs. I managed to find another defective one (which was crapping out a lot), but now I have 11x 2tb 7600rpm disks. And I got 4x 2tb 5900rpm disks on the side (will make a backup system out of them). And I got 2 defective disks laying around, will go throw them at an electronics recycle bin. I do have another similar, slightly weaker system at work which I could swap some components around (replace the motherboard and keep my RAM and CPU). I’ll keep you updated on what is to happen next (this has basically become an old HDD-related build log). 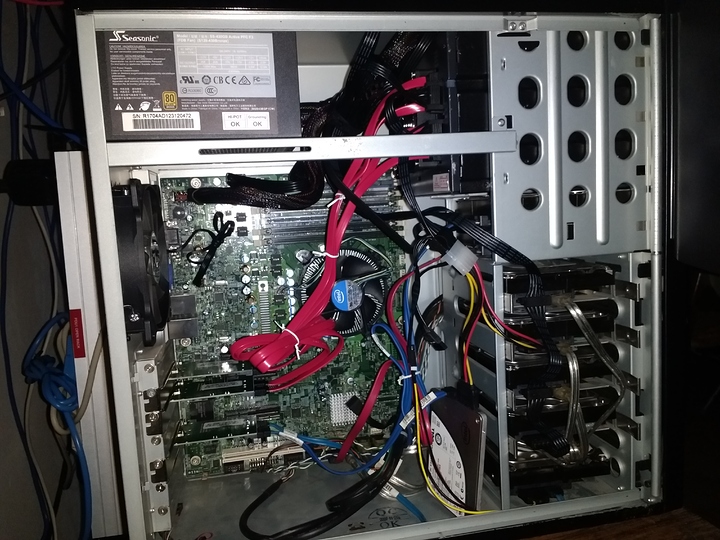 Just replaced the PSU. Let’s see how it fares. I had just the right size of cable length and just so happened that I had the exact number of adapters I needed. I wish I had some sata male to molex or sata male to sata female (I only have Berg to sata and molex to sata) to extend some, but whatever, as long as it works, I’m happy…

I’ve had a couple of molex to SATA extenders before, like the one in the pic. Till one literally caught fire while in use. Now I don’t use any. But it is hard to get cable sets for modular psu’s with the right connectors, let alone non-modular ones.
One benefit of old enterprise servers, is the power setup is pretty solid, even if they are loud.

That happened to me as well on a 5v cable (the red one) on those kind of connectors. Thankfully, I smelled the burnt plastic in time to prevent it from blowing up or catching on fire. But unfortunately, this PSU is non-modular.

I understand, and with all the drives, it’s a compromise that has to be made.

Ok, latest update. I had a bad stick of RAM, it wasn’t reporting any error, as mentioned, ras-mc-ctl didn’t see it as bad. I tried my RAM in another server at work, tested it with memtest86 and it also froze (reported no error). Lucky me that the Intel server that I tested this old RAM on had an amber LED light up, indicating the bad RAM while memtest86 was frozen. Took it out, found 2 other 8gb ECC DIMMs of the same model number (lucky me again), tested them. They work fine, no more freezes or random restarts. They work in single channel mode (duh) and at lower speed (800MHz) than they would if they were in dual channel (1067MHz), but i wanted capacity (sweet 24gb of RAM) over speed. Franken2 is now stable.

I went with RAIDz2 with 10 disks and 1 spare. I almost threw the system out when randomly 1 disk disappeared from the pool and from the system. Looking in logs at system messages, it appeared that the sata link was too slow and at the end, the port entered failed-state and disabled itself, lol. It was a bad sata cable, replaced it with an identical one and now it works. Removed and added the disk back in the zpool as I originally configured it and everything is fine. Cloning a 26gb VM, it appears to write with 1.01% / second, so that translates to around 260mbps. Notbad.jpg. I used ashift 9 when creating the pool. Pretty happy about it, hope it will last me for a while. 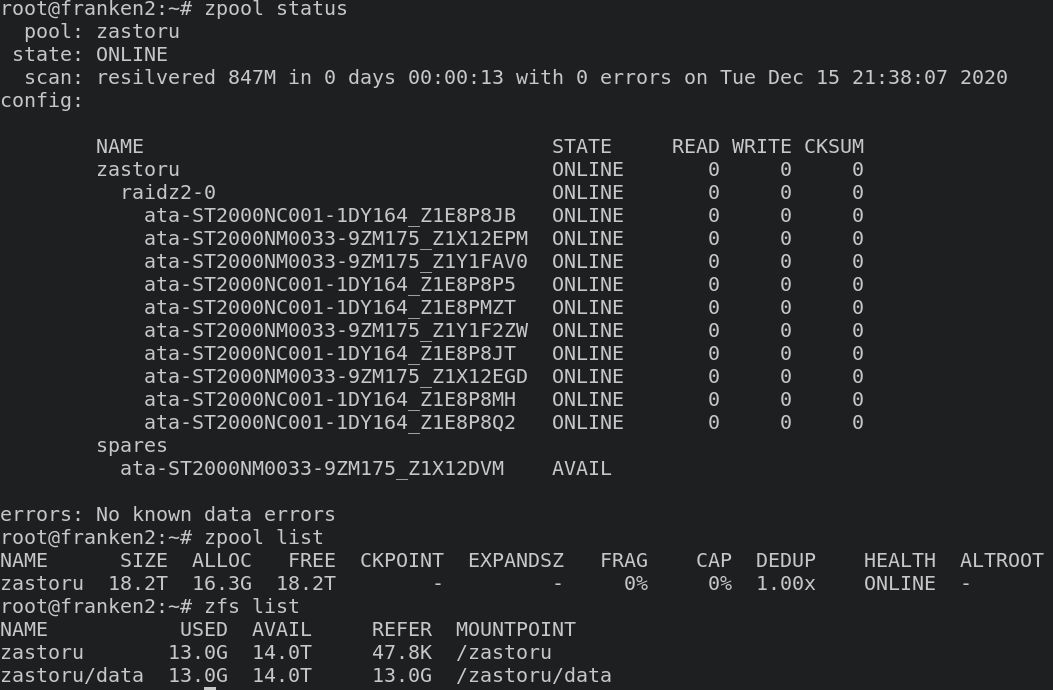 Now I need a distro that I can trust will work, that I know how to manage and that has packages / repos for some software I need, mainly Zabbix or Prometheus (I’d like to go with the later). CentOS used to be my go-to, but RedHat FML. I am too impatient to wait to see how Rocky Linux will evolve, so it’s either CentOS Stream (which I’m somewhat certain that it’s ok for home use), Oracle Linux (of which I kinda like UEK), or maintaining my own installation from source in Alpine (I really like Alpine and I don’t like docker)… oh, Void Linux has both Zabbix and Prometheus in its main repo. Brilliant, just found my distro for Prometheus and probably more stuff (mail and Matrix server). I just love Void (btw).

I will be monitoring the pool and the disks to catch any potential crashes, but given that they haven’t failed the second I started writing data on them, they should be fine (I still don’t count on them). This thread has become more of a blog post, so I will mark @misiektw’s comment as answer, because he really convinced me to go raidz2, despite me being VERY reluctant at the beginning. If anything changes and the spinning rust is too rusty for the job, I may be switching to a saner mirrored vdev from 6 disks and have 4 hot spares or something (6TB should still be plenty for what I need if I don’t host a peertube instance).

I initially wanted this to be a post for garbage collectors like myself, using very used HDDs at home, but as you can probably see, I’m too talkative to keep the topic straight. Again, I’ll update the situation of the RAID config if other disks are going to fail (they are reporting old age and pre-failures, so I am bracing myself for the worst).

I used ashift 9 when creating the pool

Just a question, are you aware of the thing you will have to check when replacing a drive?

But looking real good so far, with the trouble shooting and the investigation!

I have no idea how to scrub

Just put this line in your crontab:

That’s it. Of course preferably pick a time when you’re not using it. Interval anywhere between week and month should be fine.

Also remember to configure smartd to send you an email if disk is failing.

Doesn’t it set up a monthly scrub when you install the zfs tools? And one can trigge one at any time with just a scrub?

Maybe some distros. So far I had to do it manually. Cron I mean.

Might it be worth suggesting something like zfs-auto-snapshot or sanoid or something too? for regular snapshots, with rotation?

Or doing a recursive snapshot in the crontab?

Sure, if they’re available. I just use my own scripts for almost 8 years, so not really checking new projects in that regard. So can’t really comment what is useful.

I’m not sure I understand the question (other than serial number to see which one to take out). You mean the sector size and specs of the drive, or?.. I don’t want to invest in this build, this is just a junkyard build, mostly for testing and me having some fun. I won’t be buying new disks for it. This is why I’m testing to see what disks could potentially kick the bucket and redo the zpool accordingly to compensate.

Just put this line in your crontab:

Thanks, didn’t expect to be this easy. I also ran it manually and it repaired 0 errors (well, with almost no data, I didn’t expect anything much).

I don’t have a mail server yet and I won’t setup an external one. I’m just monitoring it manually for now. Just had 3 read and 127 write errors (zpool status) on the disk I thought had a bad cable yesterday. Log messages shows that between 23:31:11 and 23:31:39 I had the disk randomly get kicked out of the system and then back in:

I’m again thankful for all the support. You guys rock.

I was hoping to point out that ashif=9 ties you to 512 byte sector sizes, which may cause performance issues if you have to replace a drive, and get one which is “Advanced Format” or has 4K sectors.
But I guess you would probably just replace a dead drive with an older one off eBay, and older 2TB drives are mostly 512 bytes anyway…

Nevermind, looks like you are getting along well with it, so will leave you in peace

Just had 3 read and 127 write errors (zpool status) on the disk I thought had a bad cable yesterday.

Sure it looks like disconnecting cable. That’s why I said earlier that using sata for many disks is a headache. They are very unreliable.

But zfs handles those errors very gracefully, to the point that any “normal” raid controller would loose your data.
Here’s extreme case of sata links failing, but zfs recovering anyway:
https://forum.level1techs.com/t/storage-server-bugging-out

I appreciate all the information I can learn about ZFS, for future builds and hopefully future jobs. And oh sh*t, I didn’t even realize that I got some 4K sector size disks

I wanted more storage, but I guess what I have is a little excessive. Time to redo the zpool with ashift 12?

I’m all in your hands guys. I’m not sure how I forgot the sector size.

@misiektw Well, I technically have 4 SATA controllers (the on-board one and 3x PCI-E expansion cards, each with 2 SATA ports). But this is good to know. Thanks for the info.