Yt Video Idea That I Want Feedback On

So the last few months have been rather drab for me. I haven’t had the drive nor time to be creative, and now that I have time I find myself in a slump. I have loved making yt videos in the past, and want to in the future, but I’m not sure what I want to do exactly, but I have an idea of where to start.

So the other day I spotted this video. 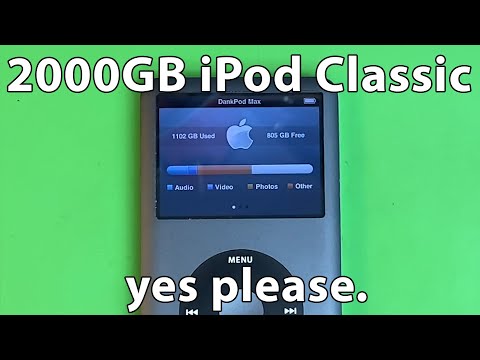 I didn’t know about mods for ipods and effectively forgot they existed altogether. Recently though, I’ve wanted an mp3/flac player for at work. Can’t call me on an ipod after all.

But I hadn’t considered an ipod. I had always wanted one, but have never ewen touched one. I had an iphone 5s for a while and that was cool and all, but it wasn’t the iphone 3g, you know? The one iphone I really wanted. Well, back in the day when the 5th gen ipod was on the way out and the 6 gen was coming in, I was gunna get an mp3 player. I ended up with a walkman nz series, 8gb, but it wasn’t that good shit you know?

So, I went on ebay, harrassed some refurbishers, and found a guy who rebuilds from recycled parts, throws in an msata ssd, whatever click wheel you want, bam, 75 bucks. Awesome. So that’ll be here on the 29th or before (hopefully tuesday tbh). So what if I did videos on stuff I’d always wanted but NEVER even TOUCHED. So that includes ipods, ipads, some game systems, some operating systems, probably some car stuff if I end up getting the twin turbo eclipse gt out of the crap lot at the local importer.

I think for a lot of people it would be interesting to see what someone does first time actually holding an ipod, let alone so many other things that are out there.

so what do you think? It kinda hits a few markets, being unboxing, reviews, reactions, and story telling. So I’d probably be able to grow pretty easy while basically doing video versions of what I do on here.

Troo, but I don’t exactly plan to have a schedule yet. Maybe one vid every 2 months or so. But that way I have time to research something before I really tackle it…

Idk. I don’t plan to be too technical.

Any SmartPhone Videos might have the problem that the web has changed a bit since they first released. Website size has exploded. Plus the built-in certificates will probably have expired. So the experience will be: meh

Audio gear in general will be somewhat resilient to age. I mean who did not want a 5 disk changer in his home stereo back in the day?

I mean that may be true for bigger channels, but I doubt I’ll really grow much. I jt don’t want an unseen channel is the thing lol. Otderwise I never get feedback.

I can go into more technical shuff if needed, but I’m not really thinking like a louis rossman sorta deal or anything. Basdcally my old format posts in wideo, one of which I’m working os rn but photo’s are being a pain in my ass.