Your Thoughts on Windows 10 LTSB

Hey guys, I know a lot of people here are like me and care about privacy in Windows 10. Along with finding ways to take out Cortana, and all the Modern Applications or at least most of them.

Some people care about having the latest and greatest updates and "features", some people don't. I am curious as to what everyone thinks of the Long Term Servicing Branch available to Windows 10 Enterprise. From what I can tell, it only updates when you download another Windows 10 ISO to actually upgrade the OS, it receives security updates for at least 10 years from its release through Windows Update but no feature updates whatsoever, and with it being Enterprise you can manage it however you would like to an extent.

Plus it doesn't have any Modern Applications, no Cortana , no Edge browser, no nothing except for the Settings application. It doesn't even have a Windows Store for Modern Applications. Anyways my question is what do you guys think of this, and would you choose LTSB if you were able to?

I can get a Windows 10 Enterprise LTSB from my work to install on my computers at home, though I am hesitant to do so as I am not sure what the downsides maybe.

I'm not sure if this is correct, but I'd be willing to bet it still has that pesky telemetry baked into it just like all the other versions of Windows 10.

However, not having Cortana or any other crap running in the background and sucking up resources sounds nice.

Being Windows Enterprise would require a Software Assurance subscription per year per machine if I'm not mistaken.

I've been using a W10 Education license and have been pretty satisfied with it so far. No Cortana out of the box, and was able to easily modify windows update to not automatically download and apply through group policy editor. Edge did come installed, with no easy way to remove it through PowerShell, from what I can tell.

Wasnt Education/Enterprise supposed to be on the same tier?

The only way to assure privacy while using windows 10 (as a user you agree to give up ALL royalties and rights according to eula) is to use an open source firewall like pFsense and mandate explicit denial of all traffic. Then allow only known good traffic.

The microsoft service agreement is the same for all versions to my understanding. Meaning you have no right to know what data is collected and/or stored regardless of options/settings/modification to the OS.

Get a good external firewall if you use windows.

Being Windows Enterprise would require a Software Assurance subscription per year per machine if I'm not mistaken.

This is correct.
Also depending on the agreement with Microsoft, it may also require that the company add on more CAL's and office to their agreement too. Although if the company has an enterprise agreement, they can likely afford to do that without noticing the difference anyway

edit: If they are buying a licence from the company and the licence was already paid for in full, it would not need the SA subscription.

Well i personally think that telemetry tracking in Windows10 LTSB is allot less then it would be in a regular version.
This is because the LTSB-N version does not come with any online services apps pre installed, like cortana, edge, store and that kind of crap.
However there probably still will be some telemetry tracking implemented in it.
I dont know if the active keylogger is also present or not.
But i assume it is, since MS seems to know whats good for you.
LTSB Enterprise versions are basicly not available to home users, unless you are a student.

Curious as to @wendell or @ryan thoughts on the LTSB branch of Windows 10 Enterprise updates with no Cortana, no Store, no Edge etc, and/or what branch of updates they are running themselves.

Also is it possible to please get a video showing how you setup Windows 10 after a new installation, and what you block and allow?

I am using Windows 10 LTSB and it runs pretty well, Its definitely faster and more snappy than a normal Windows 10 Pro install as it doesn't have all the bloat but it can be very limiting, such as, it doesn't have a picture viewer. Seriously, everything opens in paint (now GIMP after I installed it) and some features such as BASH for Windows won't work because its still Beta and likely won't be supported because of the upgrade path for LTSB.

I'm not sure to be honest, don't even think I have any DX12 games but I'll look into it.

EDIT: Actually I have Battlefield 1, I'll try and run it in DX12 mode and see what happens.

I tried Battlefield 1 in DX12 mode and for some reason it has issues on my ultrawide monitor, wouldn't recognize clicks unless I tabbed out of the game and back. I suspect this has something to do with the games poor implementation of DX12 than anything else, so I switched it to my 4K monitor in 1080p and it basically ran fine.

I also tried the Division and that also ran fine in DX12 mode. Those are the only two games I own that have DX12 support so it would seem that DX12 works fine in LTSB.

Hmm I use Ifranview since it will open just about anything, but are their any other applications that are left out? (besides Modern Apps of course)

I'm on Linux now and can't remember from the top of my head. I do have an LTSB installation in a VM but its playing up at the moment and won't boot, i'll reinstall it in the background and get back to you, this has the benefit of being an fresh install as I've added some of the apps manually on my bare metal installation.

Reinstallation was faster than expected, here is a screen capture of my VM with a list of all the default installed programs, as you can see there isn't many. 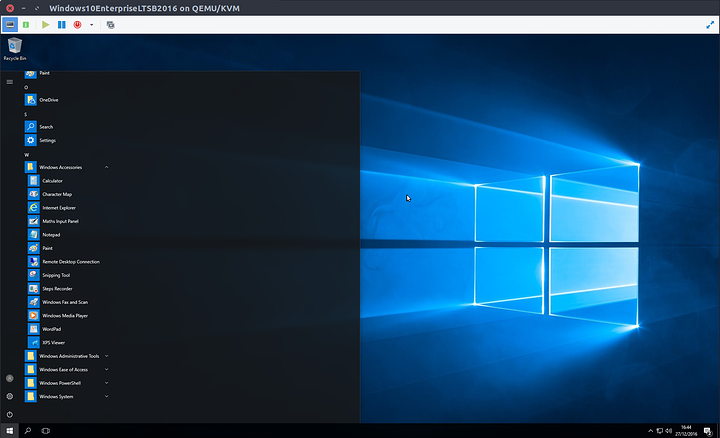 I dual boot LTSB when I need to get into windows and it's far and away the best distribution of windows 10. Everything that pissed me off about Win10 is gone. No stupid apps auto starting, no assumptions on how I like my settings, no ads everywhere. It's great and I highly recommend it

Only problem I have with LTSB is that OneDrive keeps popping up even when I disabled it on startup, it will randomly run for no reason and its really annoying. There is probably a way to remove it completely which I'll do soon.

Interesting, mine didn't come with OneDrive as far as I know

Nice to know thanks for testing it out.

Thanks man that is greatly appreciated, I will have to install this on my desktop now! Excited to use a Windows 10 without the bloat.

There is probably a way to remove it completely which I'll do soon.

Copy/Paste to notepad. save as .bat and run as admin↓↓