The compaq armada 1750 mod is coming along. I have decided to buy a fake apple keyboard because it is thin and has a steel chasis.

the laptops touchpad will be replaced with

I am still speculating on the screen which mmust be 14.1 in. Any suggestions?

Hhmmm. The keyboard may work OK, and the touchpas might be a bit clunk. The big question is whether or not you'd be able to fit the heatsink, slim ODD and battery to fit within, and whether or not you could replace the display cable and display itself in it. Might be very challenging, but interesting. Also, unless you could find an ITX motherboard that has slanted RAM slots (like slanted laptop RAM modules), you might run into clearance issues.

If that happens, you'd end up with more of a briefcase computer design, rather than a pure laptop design. And even if you make this design work, you'd still have to remember the big difference in power consumption between an ITX desktop and a true laptop, and how that *will* affect battery performance.

However, here's a suggestion that might be more interesting. Use an ITX motherboard and a PCIe 3.0 compatible riser cable to connection an MSI GTX 760 ITX video card, and make a desktop that uses a modded briefcase as it's case. So it looks like you're a serious businessman, until you plug your briefcase into the wall, and from the side pocket pull out a thin mouse, slim keyboard, and connect the GPU to a monitor. Now that'd be cool! =)

"Game like a pro, edit on the go!" Gamer or content creator, travel light and travel in style. =) A nice briefcase desktop could be a really cool thing, especially if you can figure out heat issues (low-powered Xeon using slim blower-style cooler, and low-profile low-voltage RAM?)... I'd love to see something like that instead. Putting a desktop motherboard and CPU inside a laptop case without proper ventillation or battery to power it just seems like a mod that's nifty, but not practical. But if you plan to run it as a desktop that's plugged into the wall, and you don't mind heat because you don't case about overclocking (and you wouldn't anyways on a laptop), this could be a really nifty thing! =)

Actually with my planned using of an athlon 5350 and low profile heat sink I will be able to fit up to 3 battery's that last 3 hrs each. This thing is a HUGE laptop. I have held a micro atx motherboard to the bottom and it was still bigger. it should have 55 or 60mm of clearance for the cooler. I have also confirmed the i/o shield will fit. The plan is to make it fit ANY micro atx or itx motherboard someone wants and still be portable. I may go with a low profile xeon heat sink held on with thermal glue. I would have to make a sealed tunnel for the heat to exit via old expansion card slots and take advantage of a few low profile 80mm fans as intake. They would all be  pwm for speed fan compatibility. Then I will rub this in logan and quains face for beating them to it and having a better design. If i want it to look professional I will put it in my briefcase. MWAHAHAHAHAHAHAHAHAHA

Maybe you might even be able to make this into a pet project, for hardware enthusiasts who want a desktop that looks vintage. Basically, PC hipsters. (Oh my Hephaestus, I just went there. And I want a refund! P-Chipsters? By the Nine Divides, it's multiplying! Kill it with fire!)

What I actually meant is that you could try to make something like the Colugo, but lower powered, use a PCIe 3.0 riser cable to angle sideways the MSI GTX 760 ITX GPU, and get a case that can fit inside a black leather briefcase. Use the leather on the outside to cover the IO shield in the back, and the intake fans in the front. Use a side pouch to hide cables and peripherals. And instead of using batteries, plug it into the wall, so you don't have to rely on batteries that'll drain when being used with a desktop-grade GPU.

it will still be able to host more powerful desktop components, they just cant be used on battery. The flex cable is a good idea and could be easily done but I want it to be a real laptop and use battery. The display will have an hdmi and dvi input in case you need a screen for another rig. Besides I do not need the power of a 750 ti as i have no intrest in many games other than far cry 3 and classice like gta 3. I am going to use the original display and just run games at 1024x768 which will be nice as it is alot easier on the system than 720 or 1080p I simply will need a $40 converter from e-bay

Well, sure. You can do that if you'd like. You could also get a very slim and flat HDMI cable, and bend it back from the rear IO into the monitor. =)

As for GTX 750 Ti, just because you have a dedicated GPU doesn't mean you have to push it to the extreme. Your GPU can run on idle if you need it to, and you don't have to push it past 60fps or even 30fps in your games. Limiting the framerate of your desktop GPU in a battery-limited situation is ideal in this case. Flexibility if you need it.

Moreover, you could also have it plugged in, but run your monitor off of the embedded display, simply by changing the default monitor and the default driver. =) You can have it all. You just have to moderate and not use it all at once.

As for having a power cable to go full-blast, you could get an i5 4670K, and rather than overclock it, you could underclock it. Lower it's clock for lower temps when you're not gaming and you want power savings, turn it up if you want power and you're connected to an outlet.

There's so much potential here. I'm interested in seeing what you build, how you mod it, and so forth. Make sure you take pictures and/or videos as you unbox it, build it, make it into a blog series, etc. It'd be nice. And maybe some glam pics at the end, just for bragging rights.

Maybe you could even start a blog series here on TekSyndicate, about modding everyday items or vintage technology into computers. Maybe that end table that's shaped like a wooden cube can be fitted with a matte, IPS monitor on stop, and a layer of glass added, while the bottom can house the IO shield, PSU, and more. You could use it as a dynamic board, in a board game. Or a dungeon that changes as you play, in your next D&D roleplaying session.

Add a couple of speakers, and plug it in, and you've got a conversation piece, an entertainment center, and you can add a few spacers (rubber circles) and a glass top, and you can still use it as a table and still see the display. Wireless keyboard with trackpad (like what Logitech just released), and you've got a great entertainment center with which to gather friends around, or maybe watch something while eating and drinking a beer. Maybe use it to show the score in your latest sports game, with the TV showing the game itself?

Basically, the idea of getting everyday items and putting technology in them to make them more useful, interesting and fun sounds like a great idea for a blog series. Heck, how about modding a desktop computer so it can power some tablet or smartphone displays (7" or smaller), to make a Star Trek captain's chair, or something like that? Or maybe set up several tablets together, and make a desktop arcade that resembles a Star Trek tactical console (TNG?), maybe playing a game that works well with touchscreen (FTL? or would that be an Inception of obscure and really nerdy tech references?).

Still, not that expensive. But overall, that was a great suggestion, @gigabusterEXE ! Those really are the perfect motherboards for the task. =) I didn't know they made them for desktops!

Also, if ya prefer more room for heatsink, you can also check out some of the other ITX motherboards on NewEgg. You can get wireless (with replaceable external antennas), such as the MSI Z87I Gaming motherboard, which includes wireless AC.

And for RAM, you could always go with low-latency, low-voltage, low-profile RAM. Like this:

The Crucial Ballistix Tactical low-profile RAM tends to be great for this kind of build. Not a lot of heat or power consumption, but the low-latency helps performance, if only by a bit. And the clearance in this case can really help.

Overall,trying to fit a desktop inside a laptop seems like an incredible challenge. If it works, though, it could be amazing. Nine hours of battery life with real desktop-grade CPU performance, and the upgradability and flexibility of a desktop with all the portability of a laptop? It could be a new era of computer modding, if it works out, or maybe a new industry. If it can be done in an affordable way, this might catch on with boutique system builders, and soon everyone will want a piece of the pie. Before bigger companies start to try it.

The challenge is... can the battery life really be that good? Can the system perform that well with the thermal and power limits? Can all the desired components fit within it, without being too heavy or clunky? Can it look the part and perform to match? There are several hurtles here. I don't see this being easy; but if it does work, it could be amazing. =)

this build is going to be a buy-as-you-go cheap build. I am even looking to building my own pico psu from a dead coolmax 550w psu, 90w laptop power brick, and some voltage regulators.

With that kind of hardware necromancy, you might as well call it the "Franken-mod Laptop Project" ! =P (Actually, that's not a bad name.) Perhaps with a motto of "Has Hardware Gone Too Far?" or "What has technology done?"

Has Hardware Gone Too Far?"

too far back in time, you mean, "Laptops" started out that way 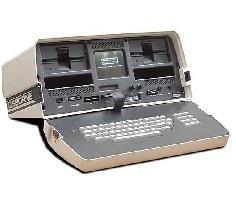 you are going to love my next blog rsilverblood