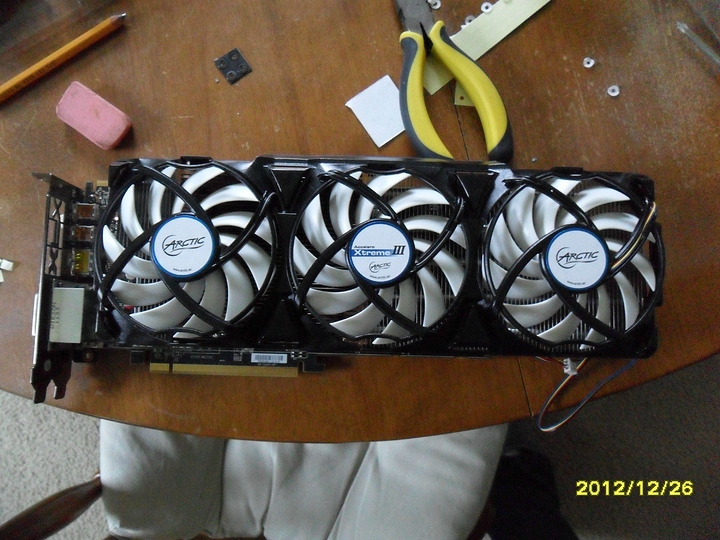 It had this garbage heatsink on it before. Although the shroud looks nice, the fan and heatsink just blew (wait pun? 0.o) 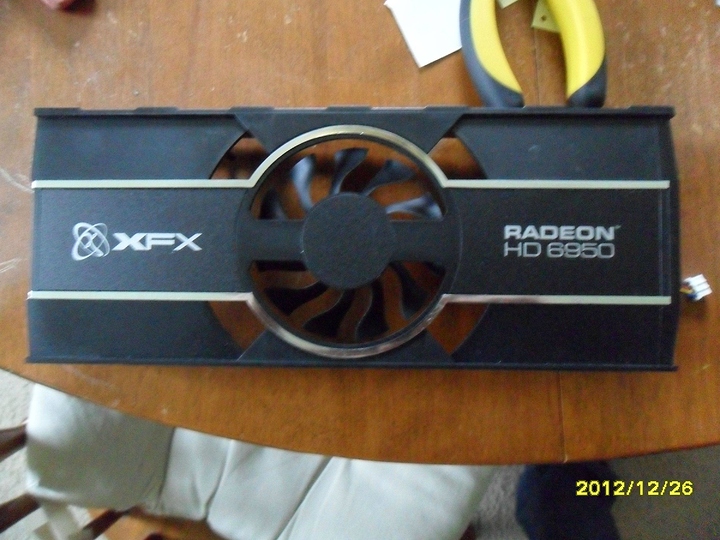 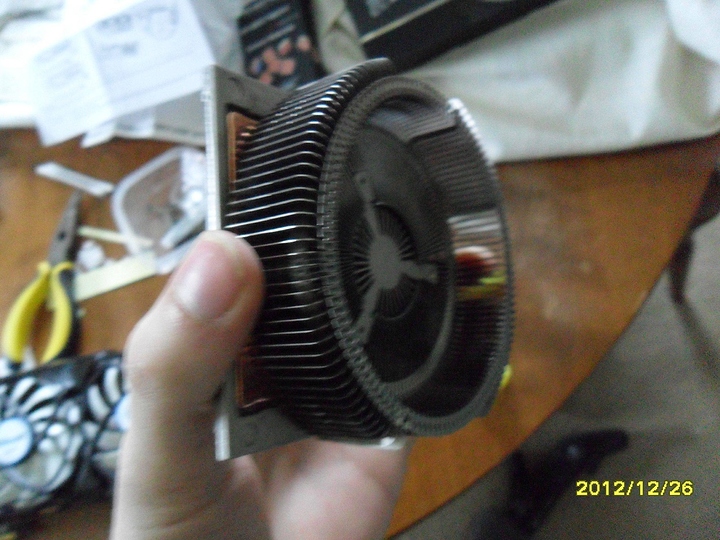 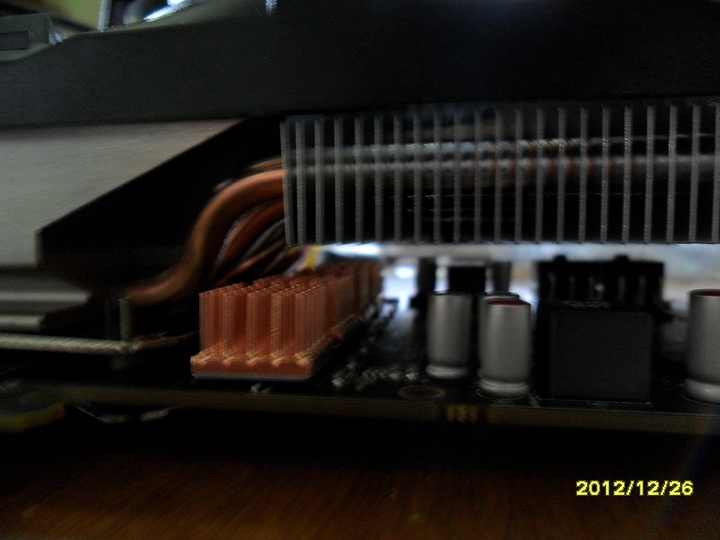 I would've liked to use something copper on the VRMs as well, but they are just in a bad spot. Thankfully the aluminum ones that come with the arctic cooling unit work great. I was happy with the quality in which the thermal glue worked too. Saw some bad reviews about the heatsinks falling off. It's quite possible those people just didn't clean the chips right. Here's the pic of the VRMS: 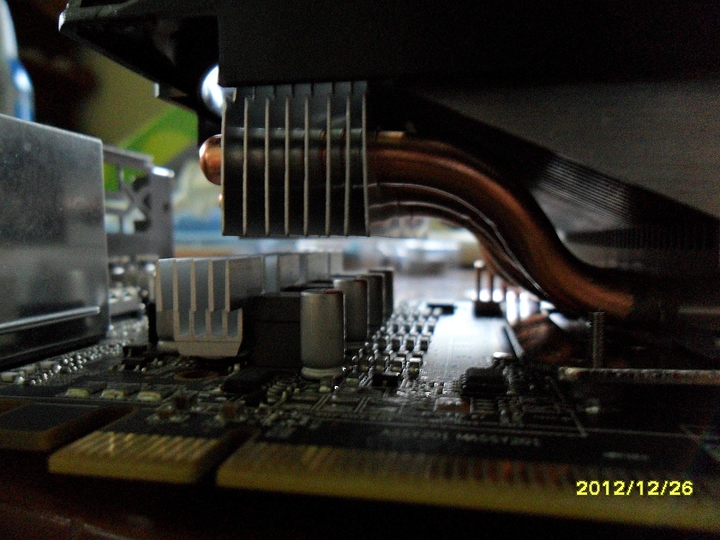 And here's two pictures of what the monster looks like in my Cooler Master HAF X Blue edition case. I really didn't think it would be THAT close of a fit. 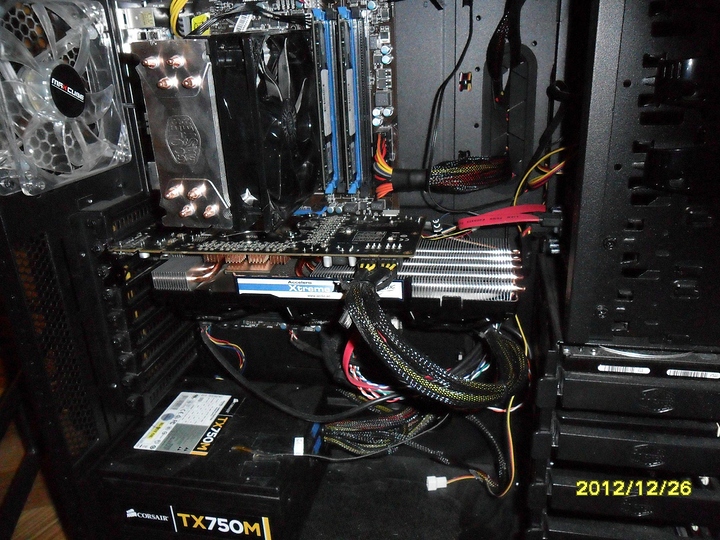 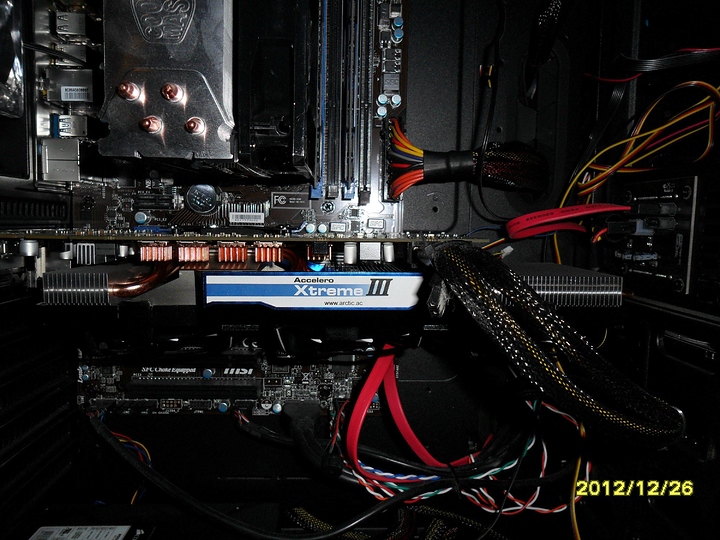 Installation wasn't really that hard. I was more nervous about doing something wrong than anything else. The only thing I had a problem with was the damn adhesive that kept the spacers in place while you mounted. I ruined about 3 out of 8 so I had to just set the back spacers on the card while mounting.

After all the fun of installing that bad boy, we got to the REAL fun. Overclocking it. I really have to say, I am extremely impressed with this aftermarket cooler. When I got my card stock forever ago, it idled at a pretty hot 40-45C and hit somewhere around 65-75C load on furmark. Right before installing the new cooler it was idling at 60C and hit 80-83C just in games, didn't bother furmark testing because it probably would've melted. Running stock settings with this cooler on, the card would idle at about 38C and furmark would take it to 55C with fans at 25%.

Once I got MSI afterburner to stop flipping out because of duel monitors and 2d/3d profiles I pushed the card to it's limits. I tested around in the 900-980MHz range and found I only needed a bit more voltage at the lower range, about 1.15v as apposed to 1.1v stock. Nearing the higher range around 980MHz I had to bump it upto  about 1.25V for general stability. Then after testing a bit at those setting I decided since I had so much thermal head way I'd go for the mile stone. 1Ghz.

My card is currently running at 1000MHz core clock with a core voltage of 1.274v. I settled with a 1450MHz (technically 5.8Ghz because GPU-Z and MSI AB divide the clock by 4) memory clock. In the earlier stages I bumped that up to 1550MHz and got instant instability. Seeing as how the memory stability is a bit harder to test I just stuck with the 1450MHz clock since it seems quite stable. I got a bit better scores at 1475 and 1500, but nothing worth keeping it there for.

The stability tests I used were Furmark for heat(15 minute 1080p burn in) 3Dmark11 on extreme(a few loops) Unigine Heaven with Tesselation set to extreme, x16 antistropic filtering, x8 MSAA. I benchmarked with those unigine settings as well. And since I'm talking about unigine heaven I'll tell you the scores I got:

I also played Operation swordbreaker on ultra setting and the intro to skyrim up to arriving at riverwood with settings maxed to further test stability. I know that's not that much testing, but the next few days should show any instabilities if there are any.

So! The results! Here are 2 pictures of GPU-Z. The first being the graphics card tab to prove to you my card and the clock speeds. The second being the sensor tab during a furmark test(after it leveled out of coarse) (and btw I put in my own custom fan curve on.)

As you can see I'm getting very good temps on this 200MHz overclock.

Also you might notice the BIOS version and the shader count. It saddens me to say with the XFX BIOS version I have flashing is disabled, even though I tried. No poor mans 6970 for me. But regardless, I am very happy with my card. And yes, to any of you out there looking for better cooling on your video card, I HIGHLY recommend the Arctic cooling Accelero extreme 3.

Let me know what you guys think!

Yep! Had this on my 6990 and got a 1ghz clock out of it at fantastic temps! Good to see you using such a nice cooler man :)

When I unlocked the bios on my old 6950's it made like.. 1fps difference in games. Not worth it, just focus on the overclock and stability WOOT!