A lot depends on the power supply, not just the mobo's VRM, but also the on-chip VRM.

The key is load calibration. In high frequency electronics, you don't just put in a bigger cap to compensate for steep variable current draw. It's a feedback system. If you run at a lower voltage, even though it's only very small incremental values, the difference in load calibration can get quite extreme.

Older chip designs depended much more on load calibration from the mobo than newer chips. Load calibration is a big unknown in Ryzen. Overclocking is just not exact science because you don't know what you're working with, you can't know, so you can't measure or calculate or even determine safe operating brackets. Even mobo manufacturers don't know the real inner workings of on-chip VRM's and what the capabilities of the load calibration are. In any case, on those mobos, the VRM's are pretty beefy, even for the lower tier mobos, so I don't think it's a walk in the park.

That is congruent with my experience, I think it is typical performance for the 1700. The 1700 is the chip I would recommend most residential users for the moment, in terms of price/performance ratio. I think the 1800X is expensive for the performance bonus compared to the 1700. I run the 1700 on a B350 and the 1800X on an X370, also a Taichi.

have you overclocked the 1800x? or the ram on that taichi? I am curious what your results were. I could use a crash course too lol.

Yes, constant overclock to 4.1 GHz. Not needing as much voltage as stated above by some people, but there are differences between chips and mobo settings, plus difference between measuring on the board and reading software values. So that can't really be discussed I feel.

I have no boost enabled on overclock, I didn't do that on any CPU. It messes up load calibration, and can make a system very unreliable. When overclocking, go for a constant set value, and set the value to the point just before the point where the temps went up with a larger increment in comparison to the steps before, and your chip will have a pretty normal lifespan and no instability during hot days in summer etc

I have ECC ram on the X370 system. I had some issues at first, but now it works. I haven't really looked into what I can do with the RAM yet. I will try to optimise it like in Wendell's video, but that'll have to wait until June or something, don't have time to get into that now.

I'm a proponent of practical overclocking.

So by no boost, you mean XFR is disabled? If so, what settings in the BIOS are you disabling?
As to the 1700, all the reviewers are saying likewise. But let me say again, I suspect many of these benchmarks are too good as they are from 1800X and 1700Xs that were Nerfed to fulfill inventories. I could be wrong, but time will tell very soon when we start seeing more folks with 1700s that simply won't OC that high.

@Sensai
Those are very nice results at stock. Do you mean to say that TWO cores had XFR Boost?

You can set the XFR clock in UEFI, just limit it. XFR will work, but not overshoot the overclock.

That's a shame, the whole point was to get just a little more above the manual OC at times.

Not a good idea. When overclocking and aiming for the highest performance or stable values, you want to keep your system's load line calibration on top of the situation.

The current draw when an overclocked CPU ramps up, is quite more spectacular than when a stock clocked CPU ramps up. Voltage is not the only factor in the equation. XFR is not about spiking the voltage and hoping for the best lol. XFR will still work at your set speed, to keep the performance up with variable workloads. A process that requires a lot of performance, will switch cores, cores will independently ramp up and wind down. You could set the XFR clock higher, but when you overclock your system just under the value where the thermals go nuts, you would probably not really want that. It's another thing if it's your goal to just set benchmarks and get the highest scores possible, but that's not real life performance, and it will not guarantee the lifespan of your CPU.

I was hoping that XFR above OC would be safe as at least two reviewers stated that they had left the LLC on Auto. This might indicate that the AM4 mainboards are able to automatically manage the voltages with an accuracy that was heretofore unknown.

@Sensai
Now that is really exciting if you look at the potential of this as the process improves.

@Ungari
Ya I agree totally. I tried to take some screen shots earlier, but had to head to work...(currently working), however when I get home I will do some more weight tests as is, and see some performance .

By the way about reliable monitors is Hw monitor fairly reliable software? Or is there something better to use?

I like to always have other free sensor reading software to compare with.
NZXT CAM is only a Beta, but I still Iike it.

OK here is a screen shot of hwmonitor the low value on cpu is 1422, and the high value is 3749. It is obviously doing what it has to when it needs it, and it looks like when it doesn't need any boost, it drops real low. 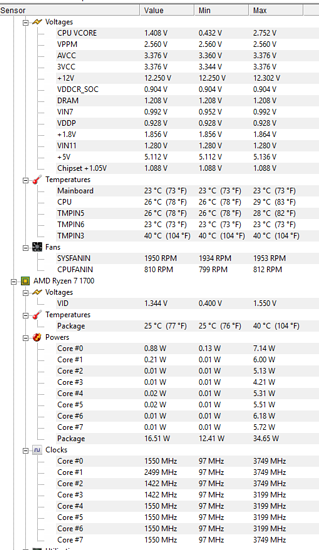 The Min Values there though are certainly a reporting issue. Ryzen cannot run with a 1x multiplier. So somewhere it's just reading the reference clock. Other than that it pretty much aligns with my tests. HWInfo is a better tool though as of right now.

Thanks much better Here is one with hwinfo... 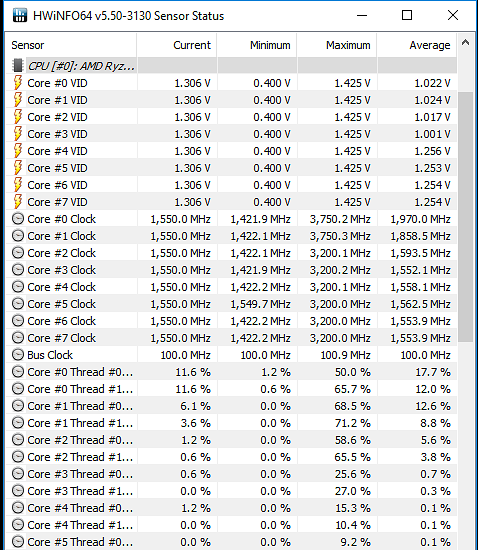 It would be interesting to see the difference between my 1700 and maybe an 1800x on the same board, at default settings. I am curious if there is any difference.

Since you own an 1800X, I would be very interested to see you monitor 8 cores set to 4000Mhz with the Core Boost ON to record any XFR activity on top of your manual OC.
I intend to try a similar test albeit with a 1600X, but if the 1600X was downgraded due to silicon quality, the 1800X would be a better platform for this.

It sits at 4ghz.
For both of them.