The GOG and Steam store pages for Baldur's Gate: Siege of Dragonspear are littered with negative reviews, with gamers trashing the game largely as a result of an encounter that takes place between the player and a transgender character.

What is wrong with nerds... is everyone seriously this backwards?

Because people now take the mere presence of a trans or whatever type of character as that being "crammed down your throat" or some such just like the backlash to the civil rights movement in the 1970, people react to every little thing as if it personally affects them.

I dare to assume that those that freak out now are both backwards, but further more feeling challenged in their fragile masculinity. They most likely thought in the first moment "wow.. sexy pixels" and now they are threatened by the thought they could be gay? - which to them must be the worst? - maybe they are not sure of what they actually are?

Without understanding the whole issue myself and not knowing any of those that bad-talk like that... those above are of course just wild assumptions.

P.s. the uploaded video referenced in the article itselve I dont care, but the title makes me s(m)ad.

Heaven forbid that gamers are actually given CHOICE in a game - blasphemy! 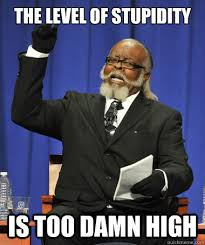 People are mad that a character tells you that they are transgender in a game set in a fictional universe. That's not even something to get mad about. In the real world if someone tells you they are transgender you should respect them for admitting it to you. lawd have mercy, I bet the people complaining are the types of people who rage when they see homosexual person. "I'm mad because he's not living his life how I was taught to live and how the opposite sex are supposed to live." This is why we can't have nice things. people are too easily offended in this era of Political Correctness.

Oh but a dude who thinks his hamster is a person is fine.

Holy crap guys some of us really need to climb further out of the primordial ooze.

Up until now I've deliberately voiced no opinion on issues like this at all. I have observed the amount of dissent towards 'politically correct' individuals or 'social jusitce warriors' overtake the volume of opposing arguments from the aforementioned groups.

To me the group flaming people for supporting transgenerism, equal rights, feminism etc. are becoming the entity they despise by behaving in the same manner they accuse the opposing side of.

My conclusion: I see the two groups becoming interchangable. Both are capable of becoming extremely riled over the presense of something they do not like. The scenario I see the most: someone shares a post or aticle on on social media resulting in a massive argument or a flock of like minded people sharing some very hair raising statements.

Take this and see how it stacks up against say... religion.

To someone as cynical as I am, it's the same thing.

I have to agree with you on that. I did not want to participate on that debate simply because everybody seemed to be a contradiction of themselves.

I dunno man, are those real reviews? No one complained about poison in Street fighter IV. or the one trans character in the recent shadow run game.

Personally i would get mad too if Baldur's Gate was my top 10 games of all time.That's like putting Jar Jar Binks in a remake of the Star Wars or Imagine if they remade Diablo 1 and re-reference every bit about Diablo as a girl.
There is so much SJW ruinning games. From enforcing female assasin creed characters, reducing butt physics on characters to forcibly adding LGBT into games as norms.

from my understanding this characters gender identify isnt part of the plot but part of a dialogue tree, you ask you get an answer, nothing changes you don't get an achievement for "accepting trans mage" If you don't lke thats fine that is your right but I doubt this instance would make anyone suddenly hate the game.

towards anyone they disagree with and label people sexist virgins living in their parents basement even harmless things like a trans character receive a disproportionate backlash and the bigger this story gets the more the vocal minorities will gather on either side slinging shit at each other.

is everyone seriously this backwards?

No... Oh god no... It's worse...
To answer your question what is wrong with nerds, a lot of things...
I like Yahtzee's explanation. People demand something different, but when they get something different they buy the same sh*t they always buy. But they keep buying new and new things, so there must be some tiny part in their brain, that actually is looking for something different.
So yeah.. Their brain is wrong. And brain does everything...

I encountered this in game when playing the expansion (currently re-playing the entire baldurs gate series).

Thing is, given that Faerûn is like FULL of shape changing stuff (its as easy is buying a spell)...

...I thought nothing of it.

The only real complaint I have with that expansion is the amount of crashes to desktop I am encountering... other than that its a fantastic addition to the series.