Hey guys, anyone have a Deneb or Thuban CPU laying around?

I was looking to upgrade my family's PC. They are currently running a Phenom II X2 521 which is just an Athlon X2 rebrand

The motherboard will only support up to a 95W CPU supposedly. LINK to HP's page of the PC

EDIT: Forgot to mention I changed out the stock PSU with a CX430M 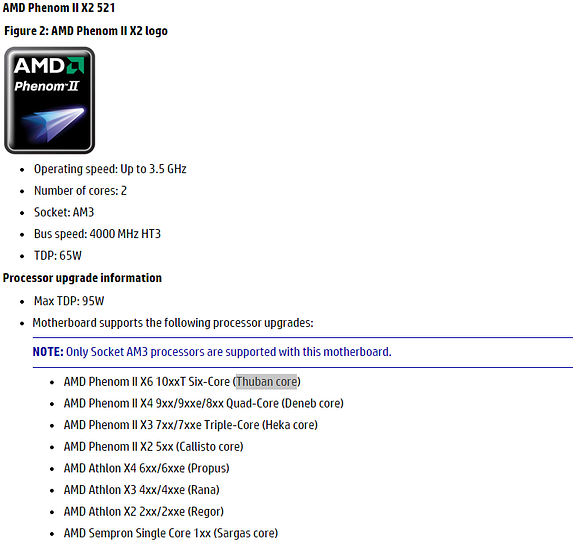 Damn, I just gave away my last AM3 CPU (Phenom II X2 555 BE) in a Christmas gift! Sorry about that, normally I'm drowning in AMD chips...

Somebody's got to have one.

That's no problem at all. They are not not in need of an upgrade, I would just like to give them a little speed boost. Occasionally my niece play games off of that CPU and the ATI 4200 graphics.

I haven't heard that name in a very long time. Last board I had with 4200 was an 880G+ from Biostar. Good board, but even Windows 7 refused to enable the Aero Glass interface by default...

Well its the onboard graphics. perhaps it was a rebrand of a mobile chip or something.

You think it would be possible to work in that motherboard even though that cpu uses quite a lot of power?

Link to CPU boss. It says peak wattage is at 189W. I would assume it's more like a pipe dream to use that CPU in the motherboard.

if you cant kill the cores then under volt and down clock if possible. even with it not being full speed the extra cache will speed things up.

It would be nice to do so but its a pretty locked down BIOS being OEM.

Yeah i looked at the specs 250W power supply yeah i wouldn't even risk it if your not running a PCI-E card lol.

Whoops forgot to mention I pulled that out and put my old CX 430M in there. I was wondering if you think it would be possible for the motherboard to handle the CPU?

PM'd you by the way.

i have a AMD Phenom II X4 965 that i just replaced, it would be sold with a brand new cooler from my FX 8120 with the pre applied thermal compound ready for instalation

sorry its been so long ive been busy at school, but i would sell it for $70 + shipping, im willing to take offers too.