WTF! Yes, I do have more than 10, I didn’t realize there was a limit?! Is there a work around? I’m coming from VROC, there’s no limit there. I thought Wendell had like 15+ in his? 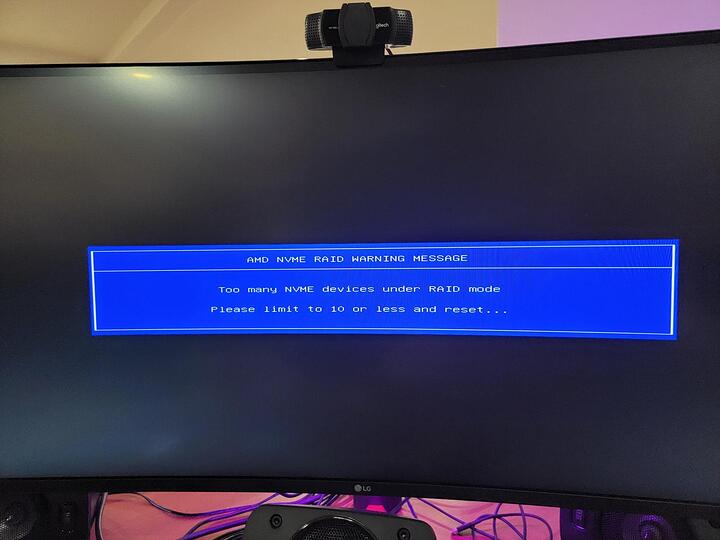 Since the pcie bandwidth is still there, a work around might be to use OS raid - but then it won’t be bootable. Another option is a raid controller card such as those from Highpoint.

I couldn’t find anything on the WRX80 board from Gigabyte but the wording from Asus suggests it might a limitation of the platform:

“With included ASUS Hyper M.2 x16 Gen 4 card. RAID is limited to a maximum of 10 NVMe SSDs on the AMD WRX80 platform”

That’s the trouble with being a trailblazer…

To be able to raid it, I have to set the PCIe slot x16->x4x4x4x4; this is when it presents an error; before you even add it to a raid. So I’m not sure I could do an OS based raid either yikes. I thought Wendell made it past this step, can someone get him in here? Shrug ("m running the ASUS WRX80-Sage)

I don’t believe @wendell did - he just talked about the maximum NvME devices; made no mention of RAID from my recollection.

yeah so I don’t use AMD raid. You don’t need it anyway unless you want bootable raid.

If you aren’t using AMD Raid the sky is the limit.

It doesn’t need to be bootable. with ASUS Hyper? OS didn’t seem to see it in 16x mode, any trick to that? I was just going to run windows server. Should I run unraid or something instead? In the WRX80, when I just set it from x16->x4x4x4x4 it triggers “10 limit”.

Make sure bios is latest and then disable nvme raid. It’s on an other screen

You can use soft raid all day long

Hmm, I did have an idea of 3 in a raid to boot and the others in a soft raid. oh well, no boot raid; not the end of the world. THANKS