Windows BSOD almost daily. where can i find the crash log i would be looking for/ how might i fix this?

hey all. so for about a while now, not up to saying for just how long, windows has BSODd on me almost daily. 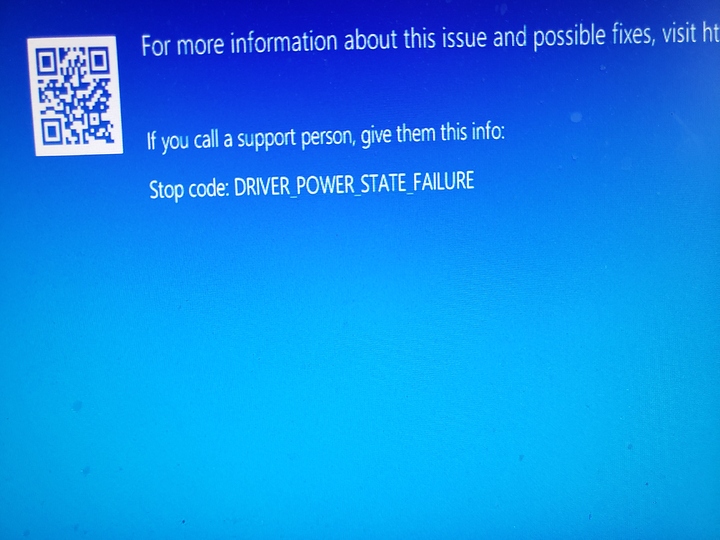 this is what pops up, ive tried searching for it, but im coming up empty handed.

im running a 1950x, on a designair, on what should be a pretty up-to-date bios.

has anyone else run into this issue?

I had a similar issue several years ago in Linux. Different hardware. But it turned out to be PCIe Link State Power Management.

See if turning that off helps. It’s in the Windows Power Management settings. This link looked helpful: https://www.tenforums.com/tutorials/100629-remove-link-state-power-management-power-options-windows-10-a.html

i found that, but its already off

Other ideas would be to see if you can read that QR code or get some data from the crash dump file, to see which exact driver had the failure. It might be a problem with that piece of hardware or its driver or firmware. Once you found out you could make sure it was all up to date.

Download BlueScreenViewer, it will tell you exactly which driver is causing the issue.

You’ll view those logs in the event viewer. press Windows+R to open the Run dialog, enter “eventvwr” or “eventvwr.msc” and hit OK. You can also right click on “This PC” and go to manage.

The issue your having most likely stems from an Intel driver or a Realtek audio driver. Id check the logs to find out which and update the offending driver. You can also download a driver updater if you want to save yourself the trouble of having to hunt down each driver. The rare occasion I use one Ive used Driver Booster. I think its up to Driver Booster 6 now if you want to check it out

This is extremely common on Ryzen if chipset drivers are not/improperly installed and if a OS other than Windows freezes if C6 is active.

I know that this thread is a few months old now, but I have started getting the same error message. BlueScreenView show:

The weird thing is that my computer starts without problems. It crashes after a few minutes, restarts and then works without problems until I turn it off. The next time that I start the computer, the cycle repeat’s itself…

My computer is unfortunately 8 years old, and AMD, Realtech etc. have not updated the drivers for a couple of years. The only problem that I have had up till now, is with the AMD graphics driver. They dropped the graphics card (AMD Radeon HD 6670) support, for like 5 years ago.
I don’t use the built in graphics card (Radeon HD 7660D) in my AMD A10-5800K, because of the problems that I mentioned.

Since the problem seems to be with the Windows kernel itself, I have tried SFC and DISM, and they found a couple of problems, that it fixed, but I still get BSOD.

Any ideas on what to try next? I do believe that the problems came with an Windows update (don’t remember which one) and because of that, I am not certain that it would go away, even if I made a clean install. It isn’t fixed in newer versions either. I tried to join the insider program, to get newer versions of Win10 that isn’t released yet. And that didn’t help either.

It seems like my fears were true. I tried to reinstall Windows and as soon as all updates where applied, it started crashing again… I did a second re-installation and applied “Windows Update Blocker 1.5” before Windows had time to do any updates and now the problem seems to be gone. However never updating Windows isn’t such a good idea.

I remember back in the Windows 7 days, there was a piece of software, that would query the Windows update servers and make a list of every single update that existed. And then you could pick and choose, which ones you wanted to apply. Is there something similar for Windows 10? That way, I will at-least be able to apply the updates for the most critical security problems and/or bugs.

Looking in to it further, it might be a bug in Windows regarding SSD’s. I always change the power settings (never turn of, never sleep, “high performance” and to never turn of hard disks. Others have reported, that the last setting (regarding the HDD) makes their computers crash.
Windows 10 version 1909, is the last one that works for me.

Any ideas on how to fix this? Sure I could let the setting stay on “turn of hard disk after 20 minutes”, but there shouldn’t be a need to… Anyway, wasn’t there a report of another bug regarding SSD’s? I believe Microsoft messed up and accidentally changed something that turned up lowering the life expectancy of SSD’s (writing to them to many times). Is that even fixed yet?

Update:
I was thinking of this problem in 2004 “https://www.bleepingcomputer.com/news/microsoft/windows-10-alert-defragger-bug-defrags-ssd-drives-too-often/”. Not really related to my specific problem. Just highlighting the fact that Microsoft have messed up SSD’s.

Did you tried System Restore, do check to settings Windows might have set the auto Restore Point in the past. Jus try it once, later you can undo it too.