I've been using W8 on my laptop for a while and I dig it.

Installed it on my desktop computer at work today, and wow, it's pretty damn effective for multi monitor use, AND pretty.

( i raised the 2 side monitors 90pixels because it will be easier for me to grab those bottom corners on the middle screen. :) )

Looks good but i think am still going to wait for service pack 1. Or next year when the next windows come out.

When two monitors are virtually at the same level on the bottom did you find it hard to hit the corners? I have dual monitors but I haven't run into this issue myself since my primary monitor is 1080 pixels tall and my secondary is 768 so I have a good 312 pixels of height above the bottom-left corner where I won't accidentally slide over to my secondary monitor.

so how can you pull out the charm bar or press the corners to go to the start screen? do you have to go alllll the way to to the right/left? I'm still quite skeptical about Win8

i tried out windows 8 on my aunt's new computer a few days ago, i probly wouldnt mind actually using it however i have my windows 7 just the way i like it so i may wait a few months until i do a computer overhaul or new build

When all 3 are of same model and resolution, it was a bit hassle yeah. That's why I raised them a tiny bit

Nop, you can reach for them on any monitor in any corner.

You can hit the bottom-right or top-right corner to bring up the Charms bar, then move your cursor up or down to select one of them. The bottom-left is your Start screen corner, if you're in the desktop or Metro UI app, you can keep clicking this corner to cycle back and forth between the two. The top-left is used for cycling between all of your open apps, but keep in mind that the desktop and all the programs open in it are seen as a single entity, so this corner is mostly useful for cycling between Metro UI apps.

If all that mouse moving sounds inefficient there are lot of revamped and efficicently laid out Windows Key + <letter> shortcuts to do a lot of functionality quickly. The best thing is that Microsoft has assigned these shortcuts in a way that you can hit almost every single one of them with one hand on the left-hand side of the keyboard.

Edit, I see now I kind of misunderstood your question... Oh well, hopefully my post was still helpful. :3

I love Win 8 as well, we are few on this site that actually love it xD I've worked out many ways to increase my productivity far greater than what I could do with Windows 7 with lots of customizations, even designed my own visual style for Windows 8 (just black, rounded window borders) and I have made custom icon tiles on my start screen 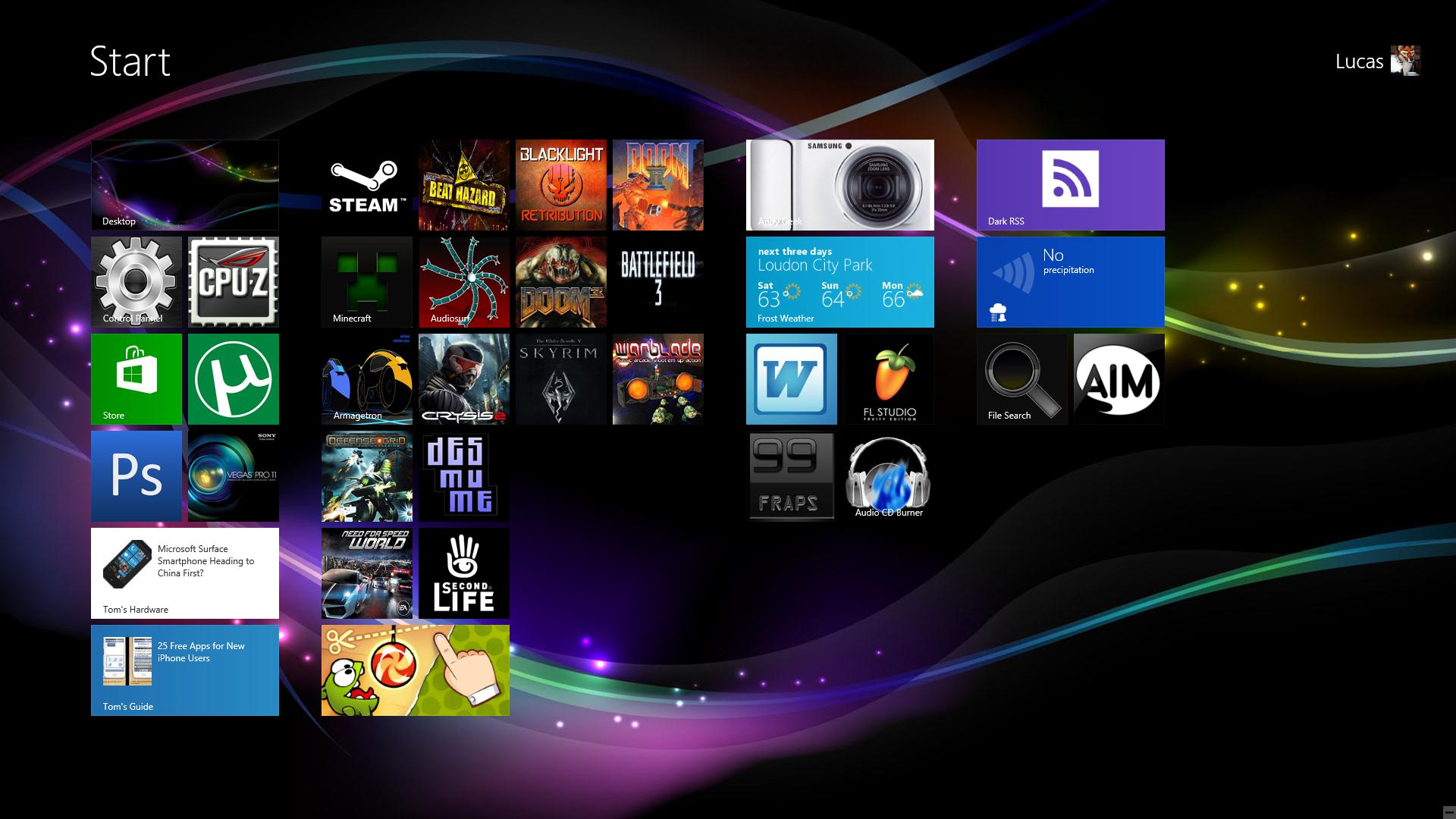 Just a matter of learning how to be more productive with this GUI, I guess. The start screen image is actually my wallpaper, so when I switch between le two, its just a nice, soft transition :P

I may try out server 2012.... partition my ssd in quarters... winos, winprog, linuxos, linuxprog.... always nice to not have to go and reinstall everything after an OS nuke.....

That's amazing. Did you buy that new software product from Stardock to do the transparent Start screen effect? I read that they have software to do that but I wasn't sure there was a different way other than that at the moment. Also how did you go about the custom tiles? It'll be interesting to see what people come up with as far as custom tile packs.

Well 8 isn't exactly bad, just new. It runs on very old hardware, but lacks driver support. That's the only thing ticking me off, as I have a secondary PC for backup, and it has a Sempron 2800+ and Via IGP.

But it felt very refreshing, and the PC really felt like it was MINE.

I can make a video for you, if you'd like. I'd be short and to the point. lol.

If Windows 8 had a Start Menu, it would be fucking fantastic.

wonder if that works with the server version....

I probably will get the 2012... more updated, better supported... and it will give me motivation to get my rainmeter lauchers set up....

Server 2012 is pretty nice as far as keeping the essentials for administration categorized. I've heard of some people turning Server 2012 into a Workstation OS and gaming off of it too, could make a good video.