I am working on a laptop for a friend. It came with an 128G SSD.

I am prepping it for a new install of Windows 10, but noticed when I ran this command:

I got this output:

Now I’m confused. Because everything I’ve learned about Trim says that Windows is supposed to automatically Trim SSD drives. And everthing I look for says that 0 is supposed to be enabled. But it clearly says here that it’s disabled.

I’m not going to pretend that I have ever used those commands but optimise (MS talk for trim) is where you find defrag in the properties dialog for the drives. It’s here that you can set a schedule. 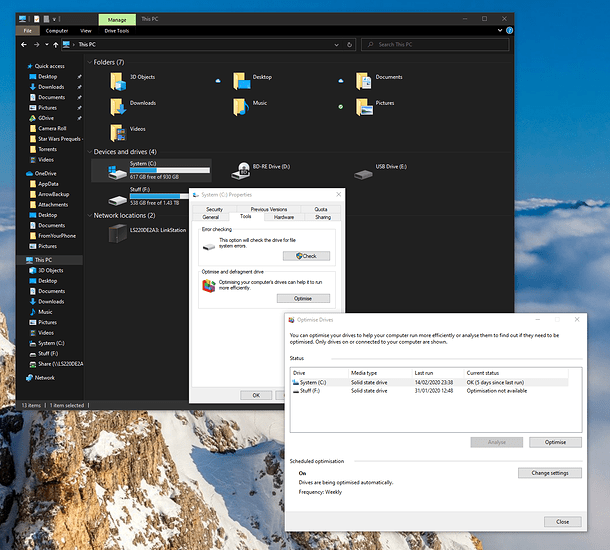 I got the same output on my machine. As far as I know, even if it looks contradictory, it just means that TRIM is enabled and working. No need to worry about it.

It’s that crazy double negative that kinda gets ya…

It’s that crazy double negative that kinda gets ya…

One gets used to it… Don’t interpret. Read as is.

Pardon my french, but why in the hell do engineers do that? It makes it hard to understand for those of us who are not in the know.

I know to someone who does this alot is gonna look down this as a stupid question, but it’s something I haven’t run into before. I’ve been on Linux for a good 3 almost 4 years I think now, and I don’t really administer windows machines much anymore cept my son’s pc cause the games he plays won’t run on even lutris or proton.

But thank you guys for the info. Another thing I learned about Windows I didn’t know before today haha. At one point I used to be very versed in Windows.

Well that makes sense if you get your head in the right space.

However, the policy is to forcibly disable the thing. Because maybe it is enabled or user configurable by default.

If you don’t deal with policy much sure, it can be a little wierd initially but its not rocket science.

And i don’t deal with policy all that much.

Nope. Never. Just because one’s used to it doesn’t mean it makes really more sense than versing it differently. It just mean one doesn’t cringe as much or often anymore

Yes, it makes sense if viewed purely logically. But yes, it could be made more easy to understand. Microsoft loves doing n-negatives, they were done with double-negatives years ago.