Wifi only connects with antennas OFF

alright, riddle me this. I have a pcie AC Wifi adapter in my desktop(windows 11)
Has two antennas that screw into it.

When the antennas are connected, it refuses to connect to my wifi (just says “Can’t connect to this network”)

If I take the antennas OFF, it connects fine.

And easily reproducible. If I’m connected already and screw on the antennas, it disconnects.

I’ll be the first to reply…

Edit: Okay, one thought. Are these antennas known good? Any possibility they are fake Chinese garbage that only looks like an antenna?

They are good. The signal strength doesnt drop when connected. it gets stronger, but for some reason something isn’t right.

I have a theory but IDK how to fix.
My GPU is in pcie slot 1 and the wifi card is right below.
each antenna sticks up avoiding the DP cables coming out of my gpu.
Maybe interference? 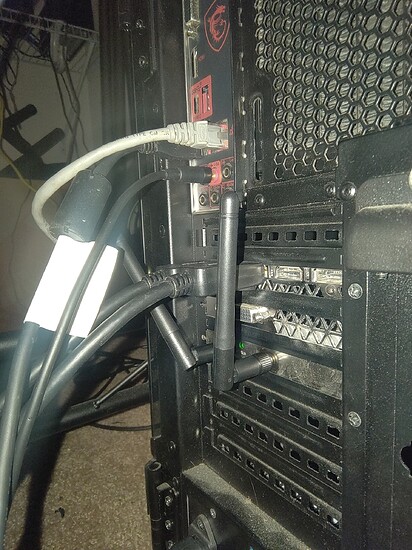 Literally in the top left corner of the pic is where my AC WRT router is sitting.
And yes, I found a eth cable long enough, but this issue is still boggling me

Maybe they are shorting somehow?

That’s some x-files stuff. It could be the DP cable, but I doubt it. I have 6 USB cables going between the wifi antenna on my system and there’s zero weirdness to report (for once, at least!)

What you could do to try and diagnose the issue is wrapping temporarely the DP cables in tin foil and make sure there’s the foil touches the case too to ground it. I doubt is gonna solve the issue, but I think it could be interesting to see if this DIY shielding can fix the issue.

Have you tried moving the card around the slots?

I have a feeling that if you move the card 1 or 2 slots down, it will better. It is uncomfortably close to the GPU.

If they were shorting I’d think the signal would drop, but in this case it gets better with the antenna. just refuses to connect with them on

good idea, will try that

did you solve this problem!

and what’s extra weird is I’ve taken this desktop to other friends houses and hooked up my Vive and never had issues connecting via wifi with the antennas on.