I just slapped this together and thought I'd share it :P

It's summer here in Australia and my WI-Fi has started acting up because of the heat. So i threw together this little cooling mod. It will also work great if your internet keeps dropping out because of an overheating router.

Basically I have the router sitting on top of the side panel mesh from a 600T with a couple of fans on it. I wired the fans up to the 5 volt wires from a USB cable and plugged the USB in to the router.

It's not the prettiest solution but it only took 5 minutes and it's cheaper than a laptop cooling thing :P 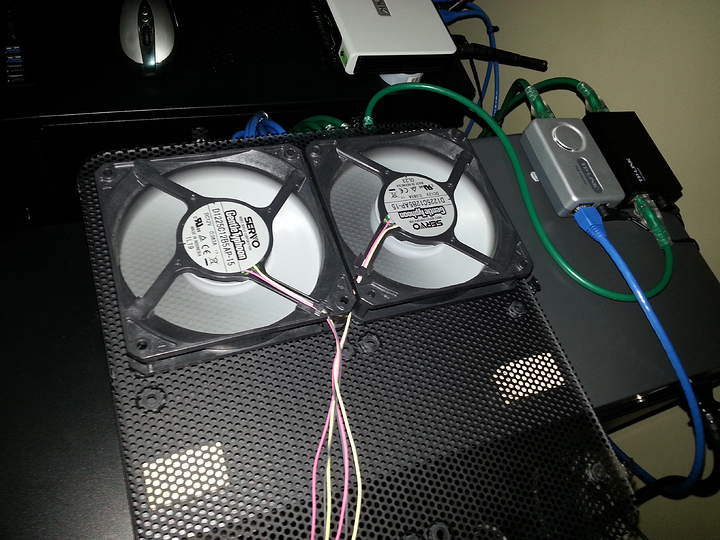 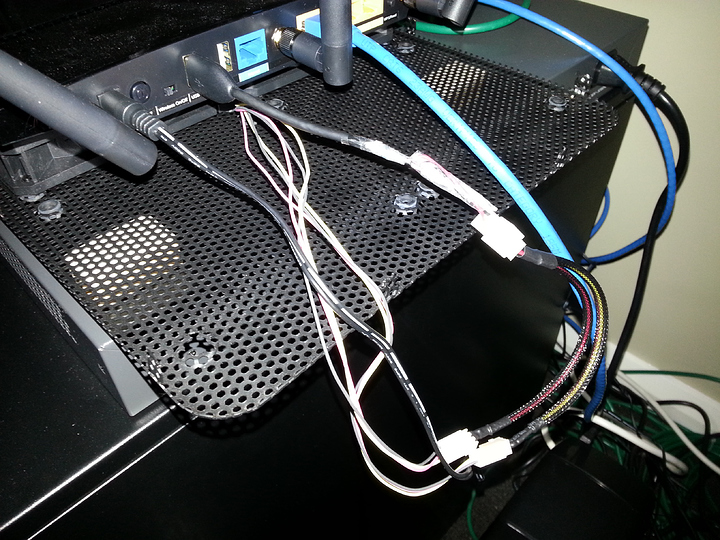 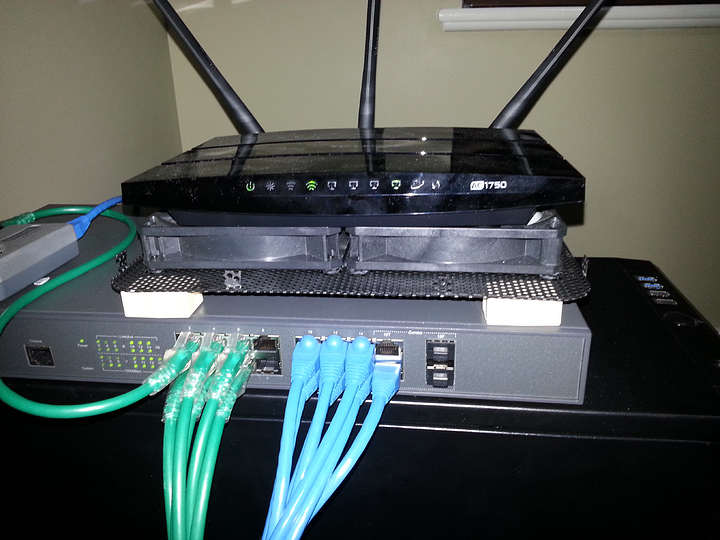 Verry nice mod. And does not void the warranty.

Very clever little mod. I love seeing stuff like this on TekSyndicate, it gives me ideas and inspiration of my own.

cool. use that usb for something.

What's it even meant for? Flashing? I've always flashed my routers remotely from my PC.

You can also use a laptop cooler

Yeah, but this was free :D

You could also use a smaller fan and attach it to the actually router, make it much neater and more self contained.

I'm not sure if that would be easier, but running the fans on 5 volts is pretty silent. I wonder if removing the casing would be enough? I like to stick with active cooling, I really don't understand why routers don't have some sort of active cooling built in considering it makes such a huge difference to their stability.

Before investing a lot into cooling a router, if there is no security tag, then take it apart, or stick a thermal probe through a vent hole, then test the temperature of the CPU and wifi radios. (though that fan mod is the safest route to avoiding any possible warranty issue)

You can then look up the model numbers of the CPU and wifi radios and find their max operating temperatures.

For many router components, when run within spec, anything under the max temperature will offer the same stability as all other components.

Even on a hot day, many routers, even high end ones, will actually run well below the overheating temperature.

if temperatures get too hot, then consider buying some thermal tape, then attaching a small heatsink to it.

for example, on one of my routers, I added a few heatsinks (also modded it to add some external antennas), and it almost cut the temperatures in half. The components do not use much power, but have a decent amount of thermal density, and can get very hot, but once a little bit of thermal mass is added, they will cool down significantly. 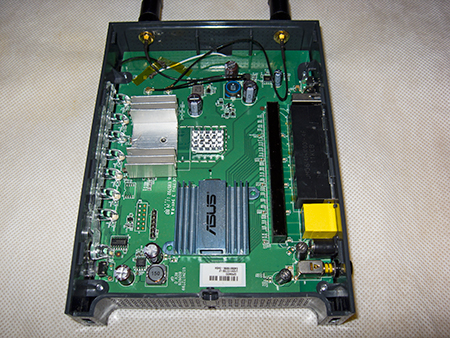 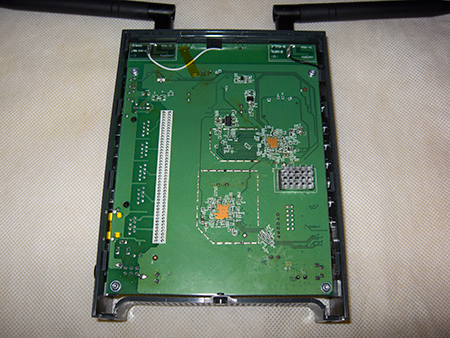 I had to do this for the summer, only for this router as it got hot enough to cause throttling. My other routers such as the R7000, have no thermal issues, even when ambient temperatures are really high.

The only time when active cooling really helps, is when you have a a router with heatsinks and is still very hot, for example, my crappy verizon fios actiontec router (had to turn it into a moca to ethernet bridge), and use another router as the main.  (my actiontec crap gets over 90C )

Depending on the construction, many companies will be unable to tell if a router has been opened. if you want a 100% reversible mod, then you can stick a little bit of arctic silver 5 thermal compound on it (if the router will be placed horizontally, then the heatsink will remain in place, and will not fall off unless it is held  at an angle for a while).

I've never had a router that was stable. This one I have now has been alright up until now but I still needed to restart it every now and then to get the wi-fi working properly. I have another one which is just used for a public network and that one has been fine ever since I put it on top of the exhaust fan of a computer.

I like the heat sink idea but I'm pretty surprised that they don't already have heat sinks.

yep, I find it crazy that many router makers will not put a heatsink, but it seems they do it as a last resort, Basically, it is it not overheating without a heatsink in normal conditions, then they skip the heatsinks without thinking that it may not work in every country  due to the temperatures. The high end routers tend to be much better as they put decent cooling which keeps the CPU well below the overheat temperature.

after adding the heatsink, I then overclocked it by 50MHz (200, to 250MHz, for some time, I was also planning on desoldering the old RAM, and soldering on a 32MB module that the company made since it had the same pinout and passives layout, but never got around to it, and eventually just got a new router.

For the fans, how low can you run them, and still keep the router cool?

may be useful if you have more of a networking rack,  basically have some duct work with holes on one side to form a platform, then mount a bunch of networking equipment to them, then cool multiple devices.

That Is a nice little cooling platform you have there Dexter, I have an ALIX based PfSense router that I got for free from my last job and it has similar overheating issues causing untold havock on my network, I just ended up adding a few heatsinks recovered from old motherboards to hot components and it seems marginally better although due the the ALIX enclosure being so tight and with little to no air flow it really is marginal at best. Seems most manufacturers are not taking Hot countries like Australia and where I am into account when they release their hardware. I have a couple of old wrt-54GL units lying around and all have tiny little fans that I have added and soldered direct to the board and despite their age they are still the most reliable units I have.

Might I suggest if you have some old pc hardware lying around that you build a full size PfSense based pc router, depending on the hardware and specs you use you should get some amazing performance and great flexibility out of it while also keeping things cooler and a embedded router.

Yeah I already have a pfsense router, this one is just for wi-fi. Thanks though :)

The other computers in this room are a bit noisy but as far as I can tell running the fans on 5 volts is silent, I didn't try lowering the fan speed or anything, I think if i put a resistor on it wouldn't spin up as 5 volts is pretty low. With the fans the router is staying cool, before just touching the plastic casing was pretty warm but now it's cool. I think any amount of airflow is good because the ventilation on these things is pretty pathetic so the hot air just builds up inside and you're relying on convection to remove the heat.

I've been looking in to putting together a rack for my netwrok gear but everything i've looked at has been too expensive.

What sort of performance improvement did you get from overclocking your router?

yep, that is one issue I have noticed on many routers, just sticking a thermal probe into the case without touching any components, will show a very high temperature, in many cases, depending on the router, air temperatures can hit nearly 150F.

For some routers such as the WNDR4700 from netgear, even though it does not have a heatsink on the CPU, it uses a small fan to cool the router, and the hard drive down.

I might do something similar, having problems here in Adelaide, and it seems to get worse in summer so I can only infer that it is the heat, because it tends to be hot to touch too.