Why is virtual box see through?

Does anyone know why the Manjaro architect installer looks like this in virtual box? 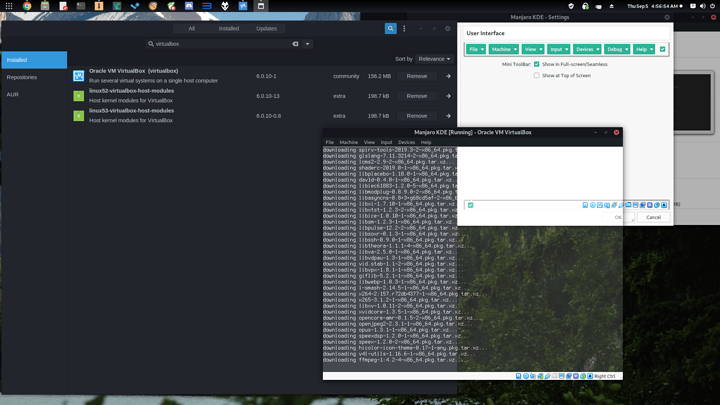 Bizzarre. I think VirtualBox has this feature where it can isolate the window that is active (in the VM), so it would appear that you are running the application natively, but actually is runs in a VM (it strips off all other components of the window, including non relevant windows inside the VM’s window). Maybe that’s active here. That’s the only explanation I have.

I’ve noticed it only does this with certain backgrounds. For example I was installing debian in a VM and while doing the graphical install lightlighted text had a transparent background. Do you possibly know of a way to this this or change it?

I’ve never experienced something like that before, but I assume it isn’t normal behaviour, definitely shouldn’t be by default. Possibly be a bug. You could try another version of VirtualBox, to see if it’s still happening, report it if necessary.

I only ever had a similar thing when Fedora first shipped with Wayland, VirtualBox was acting up big time, with completely broken drawing and compositing. So maybe it’s another compositor bug or something. There was transparency among the visual artifacts.

Does Manjaro ship with wayland by default? I don’t think it does because I have the official Nvidia driver installed and I know it didn’t work with Wayland on Ubuntu.

It depends on the desktop environment. I think only GNOME is on Wayland currently.

Oh it should run fine, as both Gnome Wayland support matured and VirtualBox fixed it (don’t really know if there was involvement on their part). I’m still using it on Gnome (on Wayland) and have no issues whatsoever. But I use 5.* versions, since vagrant only supports that currently. There might be new bugs as time goes.