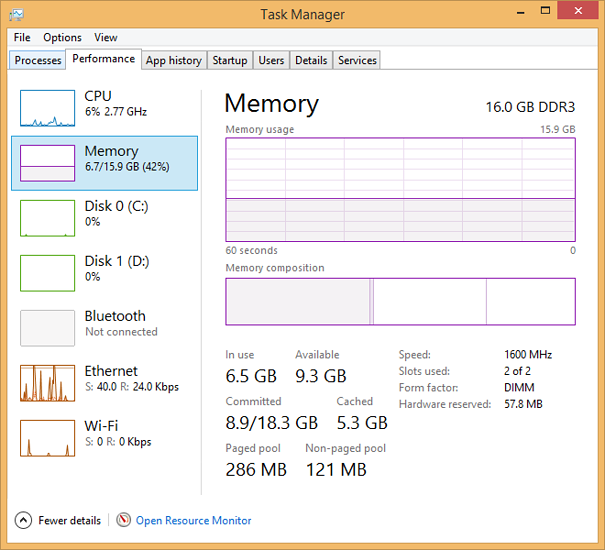 the way these games now a days are going to start utilizing more RAM. 16gigs is going to be the norm soon.

unless we know what you're running that means absolutly nothing, if it's mostly just windows then that's because it will use a percentage that it determines you don't need at the time, it will be more when you have more ram and less when you have less ram, it also doesn't really need it, if you suddenly needed to use 10gb it would stop using so much

devs don't want to exclude anyone who might give them money, that's why almost all games are 32 bit programs, unless they decide they don't care about money anymore, then games won't be using more than 4gb any time soon

If geforce experience (lol telling a pc gamer how to set his games up? sacrilege!) was eating my ram up  it would be gone!!!

You are not even exceeding 8 Gb.

I never even got close to using 8 Gb at the same time while doing things like having a browser open, watching videos and playing games at the same (I would be able to tell because paging file is disabled)

16 Gb is not going to be needed for several years.

I've got 16Gb as well, however the most I've ever seen it use was around 3.8 while playing Crysis 3. Then again I came from a Laptop with 4Gb of RAM and an AMD 6520g, I'm a bit economical when it comes to multitasking.

Since nobody here seems to understand the distinction between "active" and "standby" RAM, I'll explain. In my system I have 8 GB of RAM. 2.8 GB is being used actively. That doesn't mean I'm only using 2.8 of 8 GB. There is also 4.5 GB being used in the Standby portion which is when the computer loads something  the HDD/SSD for the first time into RAM (active) then when you close that program/file, etc. it puts it into Standby portion so that if you load that program/file again it'll load straight from Standby RAM instead of going all the way back to the HDD/SSD.

So in that 8 GB less than 1 GB is not being used. Also there are tons of reasons for large amount of RAM. Namely video editing and running virtual machines. Since I run VMs, when I upgrade my computer I'll be going with minimum 32 GB, but probably 64 GB.

I have 16gb and bf4 eats half of it. I'd be willing to bet very soon we'll need more than 8 for some games.

I saw this topic name, and I thought

Then I read this topic, and I thought

I would buy 16GB at this time, if you can afford it. It isn't a priority. I just upgraded to a low profile CL7 16GB kit. Useful for editing.

It would be wise to upgrade before the price of DDR3 goes up any further. While you might not necessarily need it now, DDR3 will be much more scarce or more expensive in the future. I want my current platform to be relevant in 3, 4, maybe 5 years+