Why Does Minecraft Use One Core More?

Minecraft seems to like one core more than the rest. Is this the same for everyone? 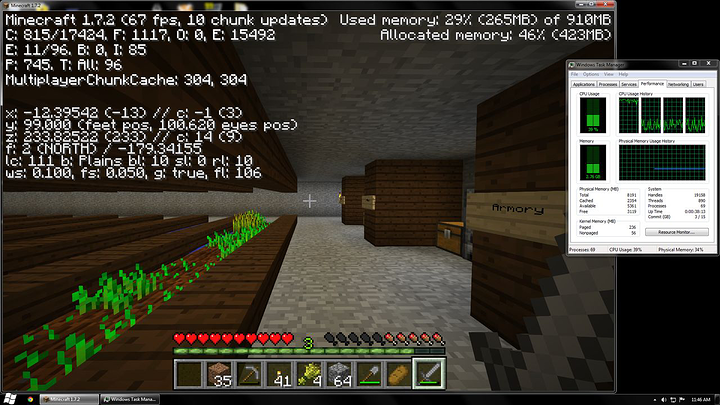 It probably just isn't optimized for multiple cores. This is true for multiple games, even major titles (although not as much anymore). I'll test this on my PC when I get home.

That isn't Windows, that's the software. Minecraft is terribly optimized for everything.

It is so horribly optimized, it should atleast use 2GB of system memory instead of 1GB and aswell as you are asking more cores. last time I played it it was a lag fest like no other...

Minecraft is one of the worst optimized games I've ever played.  Close second would be Total War: Shogun 2/Rome 2.  Make sure you're on the x64 version of Java and try to dedicate more RAM to it.

Did you end up testing it? Curious to know if it's the same for your CPU.

You've clearly never played Arma II then. God that is the worst.

Minecraft hasn't been optimised for use with multi-core processors. As threading within Java is a bit of bitch to do plus Minecraft was too far along in development when threading was considered. Due to the way Minecraft actually runs its engine it only really requires one thread, on the client side anyway.

Sometimes Minecraft does appear to be threading, but that is just the OS actually doing that. You will notice will not use more than 1 core of a processor (so on a quad it will only ever use 25% of the whole processor)

Arma 2 is not as bad as people say. All the settings they put in the options menu are not there so you can crank all of them up to the max.