What's your favourite Hypervisor solution for running and backing up VMs at scale?

For the past few years I’ve been running Citrix XenServer and later migrated to XCP-ng (open-source version) and XOA (Xen-Orchestra).

Since August 2020, the backup feature in XOA stopped working and this December I picked up my first Dell PowerEdge server, a R740xd. Strangely enough, the same issue is back again.

I’ve opened a ticket with the XOA dev team and at the moment there isn’t a solution and I’ve done my best to isolate both my setup/config as the source of the issue. I’ve even placed XOA and the XCPng server in the same “VLAN” to isolate my pfSense firewall from the equation. I have also further tested NFS connectivity at 10G which seems totally fine.

I’m therefore looking for an alternative hypervisor solution, so please share your suggestions. This is what I’m after:

I have several VMs backed up as ‘*.xva’ so any advice on recovering these would be handy, but I suspect dependent on Xen. Not a huge issue, I can rebuild these by hand.

I’m therefore looking for an alternative hypervisor solution, so please share your suggestions.

Proxmox is based on Debian, so you can set cron jobs or do anything else you’d want done on a Linux system. You also get hardware support for anything Linux supports.

ZFS, which is a nextgen filesystem, is also supported. The killer features for virtualization would be the ability to instantly snapshot before actions, and rollback as needed.

I have several VMs backed up as ‘*.xva’ so any advice on recovering these would be handy, but I suspect dependent on Xen.

You could convert these to other formats using qemu-img which is included with Proxmox, but can also be installed on any Linux system, and probably on Windows and Mac too.

Official docs on that:

I am looking into a solution involving SR-IOV NIC devices to accelerate guest networking as I’m currently bottlenecking in some high performance applications on software NAT to VMs through my Dell server host. Currently I’m running my own in-house built QMP compatible Libvirtd reimplementation. Our backend is currently based on KVM but in theory we should be compatible with ESXI, and Xen. We’ve got some features that automatically do backup. We’re basically just using Libarcd in house at this point but I’m hoping to eventually find new ways to use it.

Here’s a diagram (slightly truncated from the larger diagram) depicting the flows of master/slave forking/merge with automated backup: 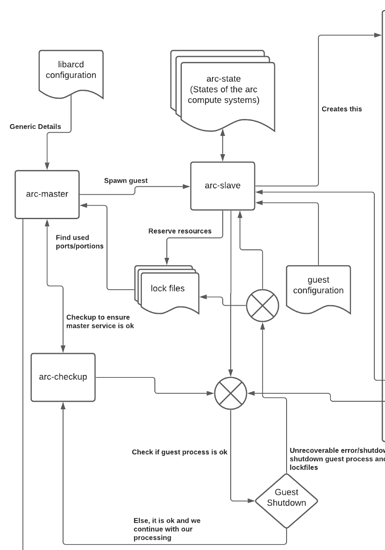 I’ve got a pool of 12 hosts supporting 384 virtual machines at the moment and while backup is currently automated I’ve suffering from limitations in cross-host accessibility of network attached storage. I’d like to eventually offload virtual disk images to something accessible to the cluster - preferably some sort of NAS pool with BTRFS or perhaps ZFS.

If you’re interested in SR-IOV NIC networking and NAS storage features under a Xen/KVM deployment I can provide some more context on the diagram above and/or if you’re interested give a brief demo of how it works at runtime. I’d eventually like to bring in some more maintainers to my Libarcd project.