My only suggestion in regards to buying a phone for travel is to make sure it has long battery life that can last upwards to 4-7 days uncharged. You don't want to be forced to find a plug whenever you stop or have to carry rechargeable gear with you all the time.

the guy in the phone store told me not to buy a international version as they are knock off phones and don't truly achieve 4g speeds.

That is a complete load of shit, in fact I prefer unlocked phones because they wont have the carriers taint on them.

or just buy a battery bank 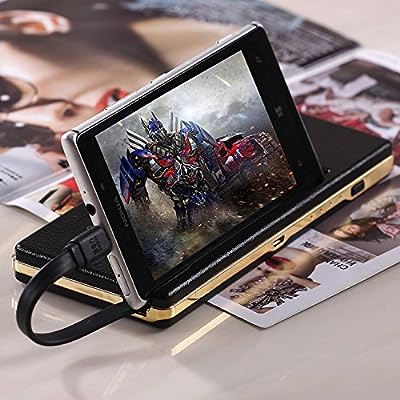 Vivis™---Life never lack of energy In today's constantly moving world, mobile devices are our windows to social media, but the problem is that they don't have an unending battery supply. How many time ...

Yeah but no one wants to carry extra on them. The less the better.

Your link without the referral

Vivis™---Life never lack of energy In today's constantly moving world, mobile devices are our windows to social media, but the problem is that they don't have an unending battery supply. How many time ...

I don't need the phone for travel just want the note 4 but don't want to pay the $729 the phone store wants will be using the phone in the US of A. I just wanted to know if there truly is a difference between a unlocked phone and a internationally unlocked phone, performance wise, I know what international usage means. I mean are they knock offs or what will I achieve true 4g speeds or what.

Oh and T mobile owns metro pcs and uses T mobiles towers so it will work.

He might have been meaning well but knowing little. I find that a lot with store employees these days. They don't to research they jisy try to sell the best commission they can.

In the past yes international versions of phones might not have had 4g like the note 2, where as the IS version had an entirely different motherboard CPU and Radio so the us was 4g but others were not.

It was mainly compatibility reasons. International phones as their name suggests work everywhere. Not everywhere used to have 4g, many still don't, but compatibility these days mean having 4g as opposed to not.

So yeah do some research checkout GSMArena for the full specs and once you are happy buy the one you want.

I would go international.

probably just doing his job which to sell and sell. have a look around on sites like gsmarena.com and look up the supported radio frequencies. you will find what your looking for :) your best bet would be the smn910f though (international version)

Ok awesome guys yall are the best I just want the note 4 and I'm just going to get the one you recommended. Ive just had that same store lie to me before and ripped me off on a $100. Guy told me a phone wasn't going on sale after Ive bought 3 phones from them and the Galaxy s3 when it was is what I got, well the next day was on sale for over $100 cheaper and they wouldn't refund me or anything they are just trying to make money and that's it what a bunch of assholes.

that is true :) whenever i walk into a tech store im like i always know more than these guys :D

Asking a salesperson for advice is generally a bad idea. There are very few situations where they'd suggest something doesn't benefit them in some way.

It doesn't hurt to ask. You might get someone sincere and knows their stuff, but odds are, you won't.

First and foremost, you need to know which phone to buy for your carrier. Sprint and Verizon use CDMA network authentication. T-Mobile and ATT use GSM sim cards. Most phones will list either CDMA or GSM and sometimes even carrier compatibility. It is also a good idea to research current and upcoming LTE bands (frequencies) used by your carrier. Then you can buy a phone that will support those bands accordingly.

I think international phones also come with two radios, so you can connect to a CDMA or GSM network, but definitely research this on the models you're interested in.

that is true :) whenever i walk into a tech store im like i always know more than these guys :D

Haha, last time I walked into a Best Buy to look for an SD card reader. Couldn't find them, so I asked someone on the floor. When he saw the house brand wasn't what I was looking for, he asked me what I was. So I asked him if they had other models. He said, "what's wrong with this one?" Haha, this guy was completely indoctrinated, obviously. I told him theirs are crap and walked away. I never planned on buying from them, but I do like to see what the competition prices things at. Sometimes convenience will trump price but it's rare.

i went to pc world (computer shop in uk where i am) a couple months back looking for some pc parts or something, the guy goes to me what you looking for and im like a gaming pc. he goes what kinda games u lookin to play and i said the witcher 3 and he shut up :P he then proceeded to show me a pc for £1000 which had a gtx 740 and he claimed its the best of the best atm. i was like naaaa ive had enough of you :P @HK_47

Nothing, i use a the Evangelion phone as mine and it works ok in the UK even only think i cant do is use the japense only apps or watch TV with the aerial. As far as im care every phone should be unlocked.

Is he talking about the difference between CDMA and GSM? I do not know enough about wireless signals but I do know that if you were staying in the states, I have google fi and it is absolutely brilliant. And so is the big ole Nexus 6.

The SMN910f cost quite a bit more than the other ones whats the difference between that one and the SMN910H its over $150 cheaper.
Answered my own question the F has snapdragon and is from or for Europe and the H has something called Exynous or something and is marked Asia.
List of a bunch of different model numbers (Why so confusing)

Its saying the Exynos is actually better than snapdragon.

Last week, hardware specifications for the upcoming Samsung Galaxy Note 4 leaked via the AnTuTu benchmark database. The eagle eyed amongst you may have noticed that something important was missing - the actual benchmark scores. Fortunately, the full a...

But the whole Asia thing worries me Does this make a difference to me? I'm in the US of A.

The SMN920c is for Europe Asia and south America, the smn910T says USA t mobile and has the snapdragon even though the other one is better. I'm confused at which model number I should get. Should I get one that's USA but has the Snapdragon or go with a foreign one that has the exynos?

Then they even have smn915 that aren't on that list this is all way to confusing I see why someone would pay more to just walk into a store and buy a phone instead of doing the research and ask for help like me.