What type of tower

How would I fit all these components into what size tower the thermlake P7 to big.
I am only a novice and of later years many thanks
Also on a fixed budget even pre owned would be ok.
Many thank everyone

That’s a big dual CPU motherboard which is listed as EEB form factor. You’ll need to find a compatible case.

Thank you for you reply,as was looking for pre owned if possible.This is how it looks at the min in the thermaltake p7 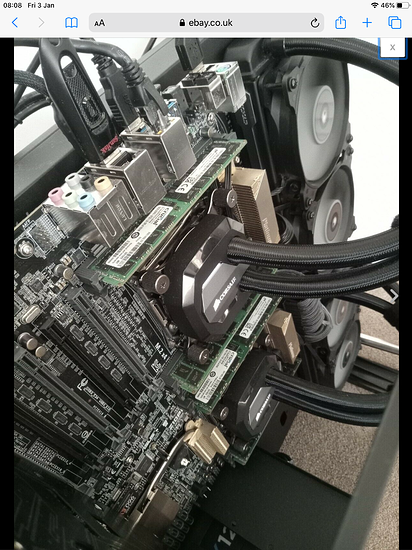 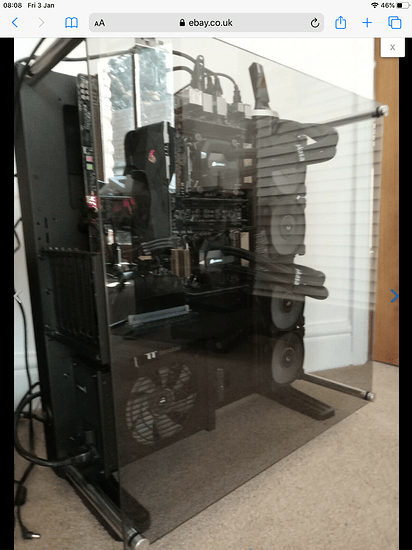 So you already have a case but it’s too big? Given that the Mobo is EEB form factor I’m not sure you’ll find a replacement case that is much smaller, and being of a rarer type than ATX the second hand market will be a little more limited.

If you are thinking of stripping this down and making it smaller a move to a single socket ATX motherboard would give you a lot more options and its likely that you would attain a good price on the case and mobo you have.

Hi just I thought could I improve performance
If I replaced the two Xeon E5 cpu 2620 any suggestions would be very much appreciated.
It’s all a learning process for me at moment.

Yes, the tower case in the link would work. You have to select a case based on the size of the motherboard you have. In your case you have probably the largest desktop/workstation motherboard going which is EEB. ATX and its variants are more common, but these are usually for single socket systems, where as your setup has two CPU sockets.

You mention improving performance, this is really subjective and depends on the type of work you are doing. For example you have 2 x 6 core CPU’s with 24 threads between them but a max single core speed of 3.2GHz. My system has a single 8 core CPU with 16 threads but a max single core speed of 4.2GHz (not to mention a different chip design). My system will definitely yield higher frame-rates in the latest games, but your system will probably compile code or compress data more quickly than mine.

So, you would need to decide on what’s more important to you - lots of cores, or higher clock speeds and then look at the CPU’s compatible for the motherboard you have. If gaming is your thing, then this rig really is overkill and probably won’t perform as well as a more recent single socket system. That’s not to say it can’t be used for games - it’ll be fine, just it’s designed for creative or developer workloads that benefit from lots of CPU cores.

There’s also the Fractal Design Define XL, which has support for two radiators, as well as the drives.

Just found a decent one on eBay.

@Mickshell, what would you be using the computer for? As @BGL just beat me to saying, with a lot of workloads, you get diminishing returns on adding this many extra cores, and having a relatively low CPU clock speed.

Fascinating case. I love everything about it.

Sorry, missed off the R2. The Z10PE-D8 definitely fits in that.

I’m sorry sir, but that is an art piece, instead of changing case, perhaps you could start charging admission to the people who come and visit the shrine to computing there?

I still don’t see why you would want to change cases.
Do you already have that system or are you thinking about buying it?

I still don’t see why you would want to change cases.
Do you already have that system or are you thinking about buying it?

I second @noenken – if it’s already in that case, don’t even bother. That case is perfectly fine unless you have a thing against this unconventional, non-tower case.

Hi,
Thank you for your input the amount of comments, I am receiving think I will stick with this case.

Hi,
Thank you for your comments

Hi,
Thank you for your comments sir,I do have this system,

Hi,
Thank you for your input,the comments I am receiving I think I will keep this case,
I will be using this system for video editing,photoshop so this system will handle with ease.
Everyone’s been so helpful on this site as this is my first post,as I state I am in later years this will be part of my past time
Kind regards.

It is a lovely case and the system will be great for video editing. I am sure if you have more questions you will find others here able to help - it’s one of the better parts of the internet

I have a Phanteks Enthoo Pro and I really like it so it gets my recommendation.
The only doubt I have about it wether you can fit two H100s in it. If you want to keep the drive bays I think you’ll need to fit one at the top and one at the bottom, if the hoses can reach that far.

The only doubt I have about it wether you can fit two H100s in it.