What is your Current Linux Setup?

We seemed to have lost stuff like this after the split, so, lets reboot it!

Question is in the title! What do you have for a system? Whats your DE? ETC!

Currently my desktop is running Antergos with a pretty well customized XFCE and the latest kernel. My main laptop is also running Ant with XFCE, but I don’t use it all too often so I have been investing time into researching about Slackware since I /really really/ don’t want to put time in to update and fix updates that break. Since I’m going in that sort of direction I decided that it wouldn’t be too bad to learn some other new stuff, so I am also going to try out the WM Ratpoison. I don’t see all too much about it and I don’t want to use i3 and I already know Awesome. Fuck it, right?

Glad to see you attempting actual content. It’s a welcome change of pace.

Might as well just use tmux. Ratpoison isn’t worth it, I promise. Tmux would literally be a better use of your time.

As for me, my only linux box is a CentOS Editing and VFX machine That I also use for ML tinkering. KDE, Mainline kernel, ZFS. Not much else to say really except That davinci resolve and Autodesk smoke are excellent if you’re getting into it.

Running KDE Plasma with…KDE on my laptop and desktop. Debian without a gui on my little web server.

May switch back to OpenSuse Tumbleweed on my PCs.

Rest of my stuff is FreeBSD. 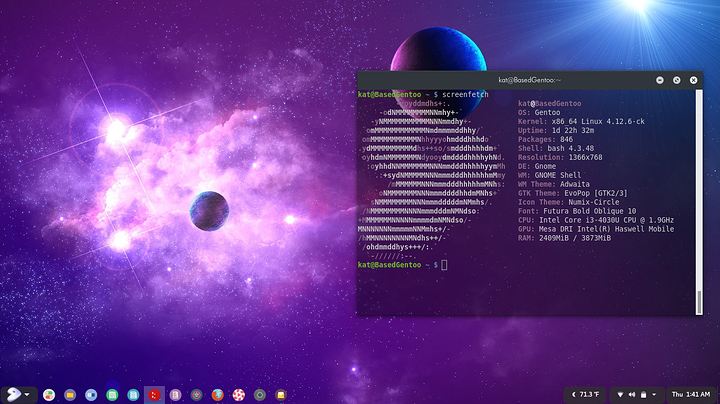 Solus with Budgie. Actually works wonderfully for my needs though.

Don’t get me wrong, I can use a TWM if I want, but I don’t want. I spend way too much time thinking and I’ve been using non-tiling DE’s since the 90s, so I’m used to them.

I like regular DEs. I just hate gnome and budgie.

That said I wasn’t really being that serious.

Tried 17.10 for the native gnome, but its a shitty mashed potato lookalike.

This is true. There is no good linux desktop, Only shades of bad.

It all depends on what kind of bad you can live with.

I’ll like budgie a lot better when it finally drops all of its GTK cruft.

I used to be a really big Gentoo guy, but ultimately I got frustrated with the massive inconsistency of it. I re-OS’d fairly often, and every time I did, I’d hop into IRC with a problem installing the desktop environment. Every. Fucking. Time. I reinstalled, there was a new package that I should have used to install the desktop environment, and I was a moron for using the ancient way that I had used.

Screw 'dat. I’ve done a lot of crazy shit with Gentoo, and I wouldn’t trade it for anything (hell, the crazy shit I did in Gentoo helped me through a couple of interviews at Cray), but you also couldn’t pay me to go back to Gentoo. A lot of people have a vague hatred for Ubuntu being a “n00b” distro. But the fact of the matter is it’s a Linux distro that’s put together so shit just works, and if you want to do the crazy stuff you end up doing with Gentoo, well you can do that too if you want.

I don’t hate Ubuntu cause it’s a noob distro. me personally I don’t like it cause Canonical, also cause I hate apt-get.