planning to buy a machine:

For pci passtrough probably through kvm, on ubuntu. A plaything for me to tinker around with linux, vms, and gaming. There will be some streaming and editing, for stuff no one seemed to have figured how to get on youtube yet, and I got a steal on some parts already for 500 € (germany):

Speaking of cheap tricking this, I have another stock cooler for "double the tdp" with the same clamps and I can mount the 4790k "oem fan" on it. It basically has a bigger copper core and is double the height. I do not see where I would get a significant difference on top of this. Maybe someone knows a cheap, good, reliant cooler for swag.

The case is where I am struggling, no one wants to get rid of their define r5's which is a good case to slaughter a small swine in for bacon reasons. Most of the nzxt stuff is pretty and expensive and I do not know about a lot of cases. How much do you guys love your r5's, should I spend 100€ on it, should I get something else?

I expect that I might tweak around in the case more then once a month, because of it being a multiheaded system. All the itx and µatx cases are out obviously (look at the motherboard) but I do not want a big tank also. Some mid size, silent case will do. I do not need water cooling, optical drives or a signature of gaben on it. 2-4 3,5" hdds + 2 ssds are a must, and I want to spend a max of around ~100€ on it. I'd rather have no windows (that's why I build this in the first place) so it will be silent and won't flash me in the face while I watch movies I totally put a blu ray in an optical drive for.

any suggestions on that last cause?

Well the HAF XB is just about the most functional case our there, the EVO has support for additional 3.5" drives rather than 2.5" drives in the video
https://de.pcpartpicker.com/part/cooler-master-case-rc902xbkkn2

That was quick, and I like the case. I "only" can get the evo, however, I would want more 3,5" s anyway. I always wanted to have hot swap disk bays for recovery also. Costs about what a define r5 costs me. Would have modded the O-diskbays to hold 2 hdds.

The 2 downsides might be, that it will be less dampened in terms of noise, and that it does need more space under my desk. it's a cool thing to put on top of a desk, but that'l be loud. Cooling will be superb in this case though I assume.

I am not sold, but I am considering this. I stumbled upon cases with that form factor before, but ignored them because they might take more space under my desk - I just do not know if that would be an issue after all.

I would have bought it already, if they would have included that odd fan on top, instead of the 2 you can get anywhere. I currently use a Cooler Master 690 II and I like it. Only thing I hate about it were the stock coolers, which literally don't suck, so I pushed them out.

You could always just turn it on it's side, or depending on how crazy you are it's possible to wall mount it, as far as noise goes, you mostly just need quiet fans and a decently sized air cooler or AIO set up.

As for the fans all you'd need is 1 200mm at the top, 200mm fans are already quiet and move a lot of air given their size. or you could later on invest in a massive air cooler and run a lot of CPUs nearly passively 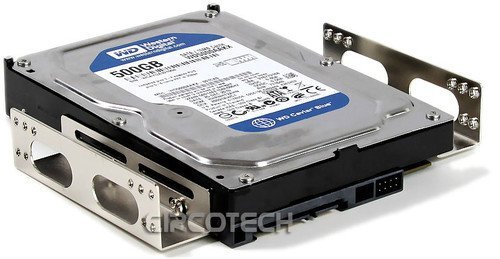 This bracket will allow you to mount one 3.5" hard drive into a standard 5.25" drive bay. The hard drive shown is not included.

could you explain that wall mount way? I build loudspeakers and have some tools including a table saw so I wager weather I build a case completely my own, or just buy one.

I have seen only "flat open" wall mounts so far, never together with a case. Some of them hide the cables, some of them look like a spaghetti junkyard combo, but all of them are custom and flat.

what did you have in mind? I am quite crazy in that regard, I ran a p4 out of a shoe box.

From this picture you can see the case has some large holes at the edges, so, if you're handy you can potentially just mount the case right to the wall, either through just some hooks or more preferably screwing it down with washers.

Perhaps a better image 2:30 if it doesn't copy

-
-
From there the case can be stripped down and the motherboard tray removed, so you can easily build the PC as somewhat normally from there

That would work, and even looks like if it were intended for it. What else if not that.
For my liking, the case would stand of from the wall to much. I guess it'l look weird. Depends on the room obviously.

I will have to look on. less noise dampening, more room, and less blocking of light / more letting dust in then the r5. This thing is pretty practical for what I intend, I give you that. If I would have money I'd go and spend some xeons and a x99 board, and this would be that one ideal case for 4 gpus and lan partys.

I am not sure if this will be any good standing sideways. do not know how the mechanism of the motherboard plate is constructed. If you got 4 heavy cards on there, mhm. I like the fact that this case isn't pulling the cards under their own weight sideways to the board.

from the looks of it, the fans use molex...and might be the same junk I keep in my basement already, also no fan control.

I talked with some people with the haf xb, and dust is a problem. Not only because it is so open, but because it is harder to clean it back to a nice state, because of all the different parts one does not come to without putting it apart.

Another problem is the noise, and for me, that it will emit light in all directions which will be bad to come by. Even though I am not a fan of water cooling, I took a second look at fractal design and found the define S.

I think this case will be it, currently searching for fans, and maybe even a water cooler for the cpu. As 3 good fans will probably not be much cheaper then such a block anyway.

nope, shows it costs 160$ for me, is much to big, and doesn't fit in the budget build thought at all.

If I would have the money to buy a 160$ case, I would as said, strip it back down to a 100 or less $ case and go put that extra cash into a taller cpu and gpu. If I would go for nzxt, I would go for the direct competitor of the r5 instead.

It is dam nice case though, give you that.

yes, reading about nanoxia a lot lately, fans seem to be good.

can you tell me about the difference from 2 to 3? i can only see that the drive bays are different, they do not do a great job on their hp to compare stuff like it - or i might just be an idiot. The pictures aren't really helping.

From my cursory inspection earlier I think it's just the drive bays that are different. Their homepage won't load for me haha. Also as I've just seen on the NZXT site, the H230 is discontinued so if you want one you might want to grab one quick.

Yes, the fractal page could be better but it is quite user friendly and i can get the info i so want. Would for instance be better if they sort for model, and then for color. Not that nice to search for Models if some of them have like 4 or so colors in the same list.

However, Nanoxia doesn't look well thought through for me at all (page), and it lags. H230 loos fine, but that's glossy in all versions if I looked right, i strictly boycott glossy plastic. I would like the nanoxia, but if ever intend selling my pc or something, i will be way better of with fractal design. Sometimes you are better of buying the junk everyone buys, because it is the stuff everyone buys later.

I do not think anyone will be able to top the define s for my "case". I could still need help with a psu, chassis fans and maybe a solution for a cpu cooler. I think it wont be a good idea to start separate threads over it.

i thought about getting some Alpenföhn 140mm Wing Boost 2 as they are well rated and come very cheap for what they do.