VMware: A computer within a computer

Just purchased VMware Workstation 12, now lets put it to some use.

What was your most interesting thing you done with virtual machines?

Also, this is my first day on the forums, hi guys! :P

Welcome to The Tek Syndicate Forums....hope you enjoy your stay. 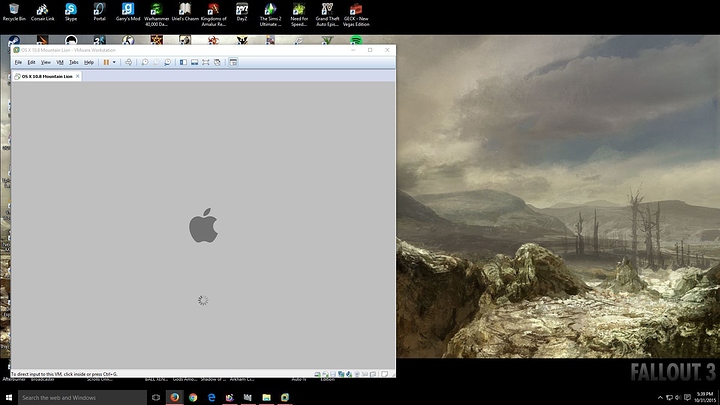 Same issue here, I managed to get OS X installed once and then somehow it got bricked. Didn't care enough to fix it.

I think its when you update the OS that bricks it. I updated mine just to see if it would work and this is what happened in the end.

While not VMware, it's related. I've set up a bunch of containers using LXC where there are a couple CentOS servers handling DHCP (dhcpd) and DNS (bind) set up for redundancy, as well as DokuWiki for my documentation. Then some clients connecting to it for configuration tests. Since LXC uses libvirt, that ties in with how KVM does its networking so I was able to connect my VMs to the same network my containers were using and have my virtualized clients on there too.

I'm slowly expanding this, I'm wanting to get more advanced things going with FreeIPA and networked shares, etc. Fun stuff, its excellent learning for anyone training for certs or working toward getting a certain technical position

While technically not within a VM at work we virtualize a complete VMWare certified training environment within a VMWare vApp and deploy that for each delegate pair from SAN to ESXi server hosts. The vApp contains infrastructure VMs including virtualised ESXi hosts which in turn contain the VMs running vCenter plus all the other necessary network resources including, DC, DHCP, DNS, iSCSI, NAS, vSwitches & lab VMs.

I setup an internal network with windows server in a virtual machine with several other xp machines (this was a while back) and learned a lot about networking.

Welcome to the forums mate! Still roughly a year ago I had a win7 gaming environment virtualized in Linux with PCI passtrough, but after I got tired of the games I donated my main rig to my nephews lol

I use KVM to virtualize Windows devolper preview, Opensuse tubleweed and FreeBSD current for software testing. I do not allow patches onto my 10 machines until I test them.

I also like having Windows close at hand in Linux so I can run Windows software without rebooting.

While back i ran Lubuntu inside Fedora inside OpenSuse. It went badly (shitty laptop).

Also tried to passthrough the GPU on my newer laptop to a Windows VM inside linux. Got it to show up in Device Manager, but i goofed up the VRAM allocation and gave up.. :(

Check out Wendell's video on passing through his GPU from Arch to Windows. Managed to run GTAV on Arch (sort of).

VMs are a lot of fun!

I use virtual machines for lots of generic work tasks, but only two that might be considered interesting.

First is just a copy of Windows XP or 7 that's locked from the outside world - which I can drop untested / dodgy software on to and run - then rewind the image afterwards to try and flush off the dirty.

Second was a FreeDOS installation on a Linux server running VMWare. The full solution allowed me to share a folder simultaneously over Samba using TCP/IP, and Netware Lite IPX (802.3 raw ethernet 2 over a 10Base2 line).

That way I can download old DOS games, save them on the server, then hop on a XT/286/386 or 486 and play without rebooting it, disks, serial cables, or some huge MS TCP/IP stack etc. I could not find another way to achieve this without using a VMWare/FreeDOS combo.